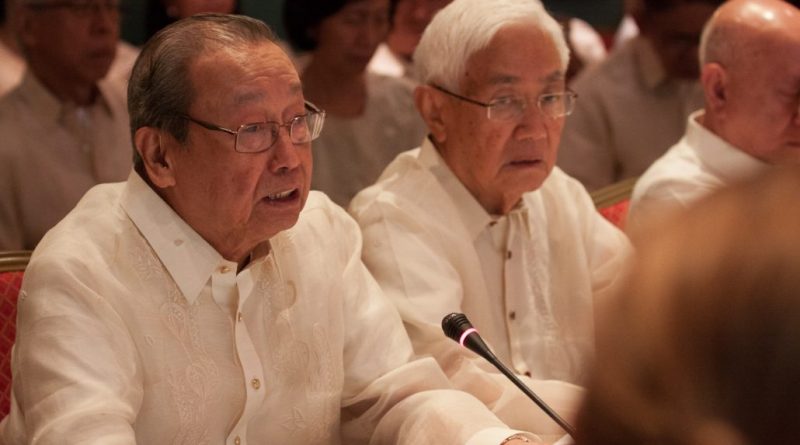 It is a great honor and privilege to speak at this solemn opening ceremony of the resumption of formal talks between the Negotiating Panels of the Government of the Philippines (GPH) and the National Democratic Front of the Philippines (NDFP). The Filipino people rejoice over this signal event and the bright prospects of a just and lasting peace in the horizon.

I share with the Filipino people and the revolutionary forces a deep sense of gratitude to the Royal Norwegian Government (RNG) for having served as Third Party Facilitator of the GPH-NDFP peace negotiations since 2001 and for having helped in a big way to keep the peace process alive. We have always appreciated highly the patience, kindness and wisdom of the Norwegian government and people in encouraging and supporting the process.

We in the NDFP are optimistic that objective conditions and subjective factors in the Philippines are more favorable than ever before for carrying forward the peace negotiations from one comprehensive agreement to another and reaching the ultimate goal of a just and lasting peace through basic social, economic and political reforms.

The chronic crisis of the semicolonial and semifeudal ruling system has aggravated and deepened. The big compradors, landlords and corrupt bureaucrats have become more oppressive and exploitative in the context of unbridled greed under the neoliberal regime of global capitalism. The broad masses of the people are fed up with the rotten system. They are desirous of revolutionary change. They look forward to the possibility of change through fundamental reforms through the peace negotiations.

President Duterte won the presidency of his government on the promise of fundamental changes. For the first time in the history of the Philippines, a president has emerged by denouncing the abuses of the oligarchy and the folly of servility to foreign powers and by using street language and methods of the mass movement. He is proud to describe himself as the first Left president and as a socialist, willing to seek common ground and cooperation with the Communist Party of the Philippines (CPP) and the National Democratic Front of the Philippines.

The CPP, NPA and NDFP are ever willing to cooperate with the Duterte government in pursuing the just cause of national and social liberation against foreign and feudal domination. They have an ever growing revolutionary strength which can combine with a patriotic and progressive kind of government to fight for the national and democratic rights of the Filipino people. There are great possibilities for the benefit of the people which can be charted and blueprinted by the comprehensive agreements on social, economic and political reforms.

Even as President Duterte has shifted from expressing a desire for a coalition government with the CPP to fa preference for an inclusive government of the Left, Middle and Right, he offers more hope for the advance and success of the peace negotiations than previous presidents and regimes. After all, the people and the revolutionary forces can benefit from bourgeois democratic reforms in the next six years. The expressed socialist aspirations of President Duterte can be accomplished only if preceded by such reforms.

What do we mean by bourgeois democratic reforms? These involve the assertion of national sovereignty and territorial integrity and the abrogation of unequal treaties and agreements; the democratic empowerment of the working people, social justice, economic development through national industrialization and land reform; expanded free public education, a patriotic and progressive kind of culture; international solidarity of all peoples and trade and diplomatic relations with all countries.

Having mentioned all these as the essential content of reforms, we can say that it is necessary and possible for the negotiating parties to forge comprehensive agreements that lay the basis of a just and lasting peace. It is not enough to seek the end of hostilities. A just peace must be founded on and sustained by reforms that lift the people from the morass of underdevelopment, social injustice and poverty. In striving for such reforms, we can have truce and cooperation and form a government of national unity, peace and development.

President Duterte has shown magnanimity and generosity by promising the amnesty and release of all political prisoners upon the start of ceasefire, by offering cabinet posts to the Communist Party and agreeing to give such posts to highly qualified progressives and by agreeing to release political prisoners in accordance with the Joint Agreement on Safety and Immunity Guarantees (JASIG) and the Comprehensive Agreement on Respect for Human Rights and International Humanitarian Law (CARHRIHL) as well as on humanitarian grounds.

We have in our midst today the NDFP consultants who were imprisoned in violation of the JASIG and CARHRIHL. They have been released in accordance with the JASIG to enable them to participate in the formal peace talks. They are deeply committed and highly qualified. They can contribute greatly to the advance of the peace process. Let us give them a round of applause.

I am proud to say that President Duterte was my student in political science at the Lyceum of the Philippines when I was still a young professorial lecturer. He became a member of the Kabataang Makabayan of which I was the national chairman. This youth organization vowed to continue the unfinished revolution that was started by Andres Bonifacio. This meant upholding, defending and advancing the national and democratic rights of the Filipino people.

As a public official in Davao City, he knew how to cooperate with the revolutionary forces and act as member or supporter of legal patriotic and patriotic forces like BAYAN and Partido ng Bayan. This is a president who can understand and appreciate the principles and program of the national democratic movement and knows how to forge a just and lasting peace by addressing the roots of the civil war and satisfying the just demands of the people.

Why do I talk so long in praise of the principal of Secretary Dureza and the GPH negotiating panel? It is to express goodwill, show rapport and indicate that the two negotiating panels have a good basis for making the current formal talks successful and for bringing the entire process to a successful conclusion.

In conclusion, I wish to point out that President Duterte has done well in choosing an experienced and capable peace advisor and in composing his negotiating panel with patriotic and capable persons who have played significant roles in the past in forging agreements with the NDFP and have participated in the people’s struggle for national independence and democracy. I am confident that the GPH and NDFP negotiating panels will achieve significant success at this resumption of formal talks and will steadily proceed to the ultimate success of the entire peace negotiations. Thank you.