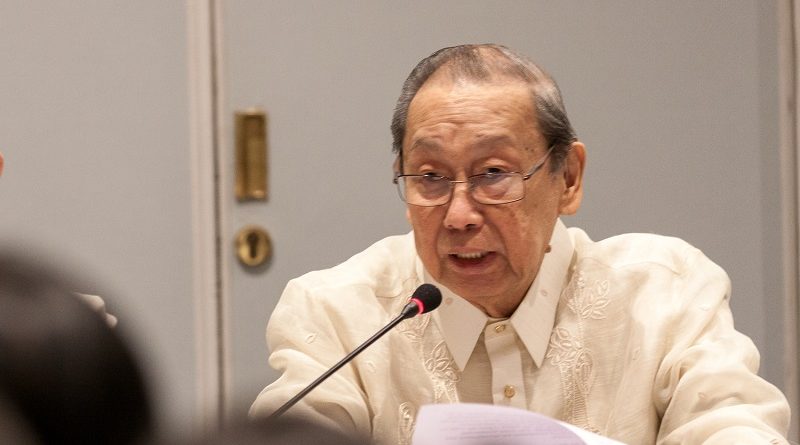 As Chief Political Consultant of the National Democratic Front of the Philippines, I reiterate to all of you the warmest greetings and best wishes of the NDFP for solidarity and peace in the new year and our deep gratitude to the Royal Government of Norway for consistently supporting the Philippines peace process and facilitating this third round of formal talks in the GRP-NDFP peace negotiations and to the Government of Italy for cooperating and letting Rome be the venue of the current round.

As in the previous two rounds of formal talks in Oslo, I continue to declare that the two negotiating panels can negotiate in a nonadversarial way and overcome any obstacle by addressing the roots of the armed conflict and seeking to satisfy the demands of the people for basic social, economic and political reforms in order to lay the foundation of a just and lasting peace and build a Philippines that is truly independent, democratic, just, prosperous and progressive.

In my telephone conversation with President Duterte last month, we discussed in earnest how to make the GRP-NDFP negotiations successful. I am pleased that President Duterte has publicly expressed few days ago the wish to meet with me at a certain point after the third round of formal talks and to take necessary measures to ensure further advance of the peace negotiations.

It is important that at every round of formal talks, the GRP and NDFP review and require compliance with the already existing agreements. Each side has its own concerns regarding these. The NDFP is grateful for last year’s release of the NDFP consultants detained in violation of the Joint Agreement on Safety and Immunity Guarantees (JASIG) and the Comprehensive Agreement on Respect for Human Rights and International Humanitarian Law (CARHRIHL). The NDFP continues to expect the release of the hundreds of political prisoners in compliance with the CARHRIHL and JASIG.

The concurrent or reciprocal unilateral declarations of ceasefire by the GRP and NDFP can be easily turned into a more stable bilateral ceasefire if the GRP complies with the CARHRIHL by releasing all political prisoners listed by the NDFP who have been unjustly and wrongly imprisoned on trumped up charges of common crimes. The most effective remedy for such release is through general amnesty as President Duterte himself told the NDFP emissary in May 2016.

In view of the apparent political rehabilitation of the fascist dictator Marcos with his burial in the Libingan ng mga Bayani, the NDFP has been concerned about adverse consequences to the provisions in CARHRIHL for justice and indemnification of the victims of human rights and violations during the Marcos regime. It seeks an assurance from President Duterte and the GRP that said provisions will continue to be respected and complied with. At any rate, I am glad that in advance of the third round President Duterte assured the aforesaid victims that they would be indemnified promptly and properly.

The NDFP is seriously concerned with violations of the CARHRIHL and the unilateral ceasefire arising from Oplan Bayanihan and Oplan Kapayapaan and from the anti-drugs campaign Oplan Tokhang and Double Barrel. In this regard, we the NDFP expect the GRP to comply with CARHRIHL.The Joint Monitoring Committee received complaints for investigation and appropriate action.

Ahead of the third round of formal talks, the Filipino people are expecting the Reciprocal Working Committees on Social and Economic Reforms to make a significant advance. Both RWCs have already fleshed out the common outline of the Comprehensive Agreement on Social and Economic Reforms (CASER) and can indeed make a significant headway in the current round in reconciling their respective draft and agree on how to accelerate the unification of the drafts by holding bilateral draft sessions by teams before the fourth round.

The prospect is in sight that within six months the CASER shall already be ready for signing by the panels and everyone will understand how genuine land reform, national industrialization and expansion of social services shall be realized. The GRP and NDFP should be truly interested in social, economic and political reforms. The Filipino people want to end the oppressive and exploitative ruling system dominated by foreign monopoly capitalists, domestic landlords and capitalist bureaucrats.

With regard to political and constitutional reforms, the NDFP holds the view that there are good and viable examples of both unitary and federal forms of state. A federal system of government is not necessarily good or better than a unitary form of state, especially when it carries over from an already rotten unitary form of state certain malignancies and does not have constitutional guarantees against the penchant of the oligarchy for puppetry, dictatorship, graft and corruption, dynasty-building and warlordism.

The NDFP is willing to maintain its alliance with the GRP and the Duterte administration in particular by cooperating in the founding of the Federal Republic of the Philippines, creating a parliamentary system and making a new constitution that upholds, defends and promotes national independence, democracy, economic development, social justice, cultural progress, independent foreign policy and international solidarity with peoples and all countries for peace and development.

The Reciprocal Working Groups on Political and Constitutional Reforms of both panels have already finished and exchanged their drafts of the Comprehensive Agreement on Political and Constitutional Reforms. They have advanced ahead of schedule. There is plenty of time to enrich and polish these drafts even while CASER is still being negotiated. It will not be surprising if after the signing of the CASER by the panels, it will take one or two rounds of talks or some three months after the forging of CASER to finish the CAPCR for signing by the panels.

The advantage of having the CASER and CAPCR signed and approved by the principals within the first two years of the Duterte government is that these agreements shall be implemented for at least two years before the end of said government. If implemented to the satisfaction of the Filipino people and the NDFP, these agreements shall lay the full basis of the Comprehensive Agreement on the End of Hostilities and Disposition of Forces as early as 2020-21. The leaders, officers and troops of the warring parties can expect to benefit from a mutual general amnesty.

The Filipino people, the NDFP and its forces continue to hope that the peace negotiations will successfully pass through the following tests and phases: the amnesty and release of all political prisoners in compliance with CARHRIHL, the forging of CASER and CAPCR, the implementation of the three priorly cited agreements and the forging and finalization of the EHDF.

In various ways, President Duterte can prove in real and concrete terms that he is truly a patriotic and progressive president and fights against the imperialists and oligarchs for the benefit of the people. The GRP-NDFP peace process is one of the best ways to do so. And other ways follow easily, when the good agreements are implemented and the broad masses of the people are aroused, organized and mobilized to act for their own good along the national and democratic line. Thank you.#