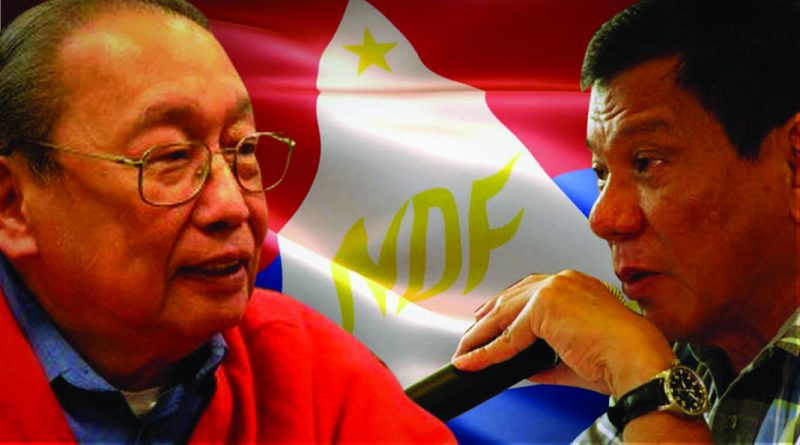 The Filipino people and the revolutionary forces led by the Communist Party of the Philippines (CPP) have a lot to thank Duterte for. Though unwittingly, like the tyrant Marcos in his own time, Duterte has become the best recruiter and the best transport and supply officer of the New People’s Army (NPA).

As the best recruiter of the NPA, Duterte has driven so many people to join the NPA by running a tyrannical, treasonous, mass murdering, plundering and inflation-generating regime. The people have no choice but to fight such an evil regime.

By terminating the peace negotiations, he compels the armed revolutionary movement to concentrate on intensifying the people’s war and cast away any illusion that this regime of terror and greed can negotiate social, economic and political reforms to address the roots of the armed conflict in order to achieve a just and lasting peace.

The more direct kind of assistance that Duterte gives to the armed revolution is splitting up his military and police forces into two parts, one part for psywar and mass intimidation and the other part for blind and deaf armed offensives against the people.

The part for combat is weakened with less personnel for field deployment. In any case, whatever is the number of combat personnel of the reactionary armed forces, they are rendered blind and deaf by the lack of popular support wherever they dare to move against the guerrilla fronts.

Duterte is the best transport and supply officer when he sends his troops and police to attack the guerrilla fronts. When they advance in superior force, the NPA retreats and gives the enemy an illusion of winning. But when they camp and take over rough terrain, their strength is thinned out and they leave gaps between units and make small detachments and patrol teams, which are easy targets for the counteroffensives of the NPA.

Duterte’s scheme to destroy the NPA in Mindanao and then in Luzon and the Visayas has utterly failed. The predictions of Ano and Duterte that they could destroy the NPA before the end of 2018 have proven to be false. Duterte’s prediction that the NPA would be destroyed before the middle of 2019 have been debunked by DND secretary Lorenzana himself who begged for more time until 2022.

The NPA has become stronger in Mindanao, with more enemy units being annihilated and disarmed. At the same time, the people’s war in Luzon and the Visayas has successfully intensified. Thus, Duterte is compelled to redeploy some of his forces from Mindanao to the Visayas and Luzon. The 75 percent of his military forces concentrated in Mindanao since 2017 are now down to 64 percent, according to inside AFP sources.

The diehard reactionaries like Duterte and his armed minions always fail to appreciate the strategic line of protracted people’s war in pursuit of the people’s democratic revolution. This strategic line gives the wide space and time for the NPA to grow from small and weak to big and strong and to lure in the enemy forces to spread out thinly in the countryside and to so many islands for NPA tactical offensives to become more effective.

It is impossible for the reactionary military, police and paramilitary forces to defeat the NPA through sheer military operations and puerile psywar. The NPA already has nationwide strength and is deeply rooted among the toiling masses. It occupies almost all the strategic areas favorable for guerrilla warfare in the stage of strategic defensive and for the prospective regular mobile warfare in the strategic stalemate.

The Communist Party of the Philippines (CPP) has wisely changed the NPA force structure, with 40 percent of its units relatively concentrated for tactical offensives and 60 percent relatively dispersed units for mass work in each of the 110 guerrilla fronts. By seizing more arms from the enemy forces, the NPA is increasing its ability to hit the weak points of the enemy at will all over the archipelago.

At this time, the termination of the peace negotiations seems to benefit Duterte’s scheme of fascist dictatorship but in fact, it drives the broad masses of the people and the organized revolutionary forces to wage all forms of resistance to isolate and intensify them in order to isolate and defeat the tyrannical US-Duterte regime.

As an observer of the current civil war in the Philippines, I have learned from CPP revolutionary publications that the best way to frustrate Duterte’s scheme of fascist dictatorship, to puncture its arrogance and debunk the fake surrenders and fake encounters staged by the regime and its armed running dogs is for the NPA to deliver more lethal blows on weak points of the enemy forces in the countryside and deliver head blows to the regime’s most brutal, corrupt and drug-trading officials in the urban areas.