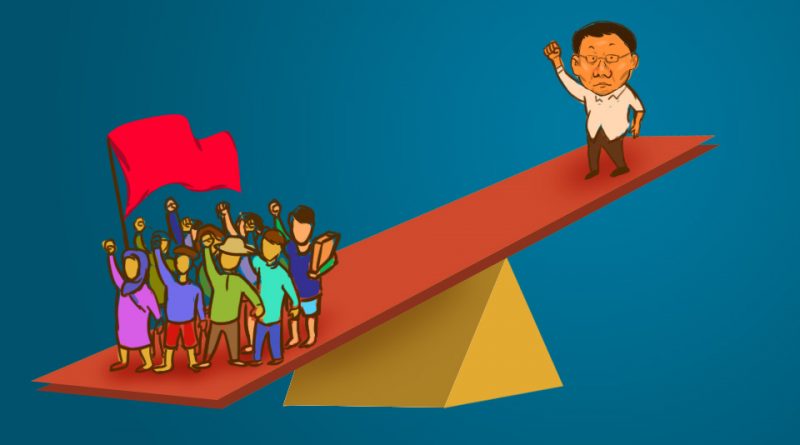 Some scholars scoff at President Rodrigo Duterte’s repeated pronouncements that he is a Leftist, a socialist. The skepticism is understandable since no president of the Republic has ever made a claim about being an advocate of Leftist politics.

Maybe the scholars have a different concept of what it means to be a Leftist in the Philippines. Hence, they could not readily accept a politician’s confession about his real ideological leaning. Perhaps the politician is delusional, or he is deliberately distorting the idea of the Left.

Ironic that the scholars promoting pluralism are now seemingly protective of the politics of the Left. Can’t Duterte invoke pluralism to propagate his views about the Left? Perhaps he can mimic the pluralists who like mixing contradictory but nice-sounding theories while naming their work as a legacy of the new, democratic, inclusive Left.

Meanwhile, the National Democrats (NatDems), the supposed guardians of the true Marxist-Leninist-Maoist doctrine, are openly praising Duterte’s admission of his Leftist bias.

Unlike some academics who dismiss Duterte’s brand of Leftist politics, the NatDems have welcomed the opportunity to clarify and explain the meaning of national democracy and socialism.

Before the rise of Duterte, many Filipinos erroneously assumed that esoteric terms such as socialism, Left, and oligarchy can be freely discussed in the academe and online media but not in mainstream politics. We can question the sincerity of Duterte, the politician; but we must at least give him credit for defanging the poisonous impact of red-baiting. Suddenly, it’s quite normal to talk about the progressive stance of the Left and Leftists in the bureaucracy. Raising clenched fists is cool once more.

Hopefully, there will be no more overpaid political operators urging Leftist leaders to hide their Red image and dilute their radical politics. We can now argue that voters are ready to support national candidates espousing Leftist politics. Through Duterte, the public was instantly made aware that a Leftist is not just the typical street rallyist, angry pamphleteer, indignant college professor, multitasking NGOist, and opposition lawmaker. A Leftist is also someone who can lead the government.

Indeed, there are various shades of the Left. Some of them are well-entrenched in the corporate media and academe who identify themselves as heirs of the noble tradition of the Left. Yet they spend more time attacking the politics and activities of real existing Left in the Philippines than popularizing Marxist teachings. They are anti-Left pretending to be Left. They endorse the Yellow Left whose claim to fame is their notorious, unprincipled collaboration with the previous regime.

Then there are so-called Leftists who exaggerate their impact on local politics even if they have no significant ties with the grassroots. They ridicule and demonize the mass movement while portraying themselves as victims of Stalinism and other imaginary crimes in the global community. Their foreign funders are too naïve.

The Yellow Left’s anti-Duterte crusade is buoyed largely by its canine devotion to the previous government. Pathetic and opportunistic that its leadership suddenly remembered the value of dissent after their political patron is no longer in power.

Between these polite Leftists celebrated by the ruling class and the self-styled Leftist Duterte, whose politics will advance the socialist cause?

For the NatDem movement, the choice is clear. Choose the side which has allied with the revolutionary forces in promoting the welfare of the people. Choose the political force capable of uniting the people against foreign domination, feudal oppression, and systemic corruption. Choose the ‘Left’ which has a record of acknowledging and respecting the politics of the NatDem Left.

The Duterte brand is the superior choice over the Yellowists if the aim is to strengthen and expand the influence of the revolutionary movement in the country.

Thanks to the Yellow Left, the NatDem movement is aware of the creeping dangers of reformism and political cooptation.

Duterte’s openness to the Left is often cited in the media. What is not highlighted is the critical interaction between the new government and Leftist organizations. Rallies and mass actions are still being organized across the country. Activists are still studying dialectics, not Dutertism. The people’s campaign for a democratic and patriotic change is not anchored on lobbying for bureaucratic reforms but mainly through militant, political struggle.

The Left continues to reject the reactionary character of the ruling system. First and last, it upholds the people’s interest and not the blind perpetuation of the state machinery. Its mass organizations have already pointed out several weaknesses of the new government even if it maintains a friendly relationship with the president. At one point, a Duterte loyalist in the Cabinet even publicly derided NatDem leaders for criticizing the macroeconomic policies of the president’s money experts.

Yes, the NatDem is supporting the pro-people programs of the Duterte administration; but it is not willing to abandon and compromise its comprehensive platform for social transformation. The revolution continues.