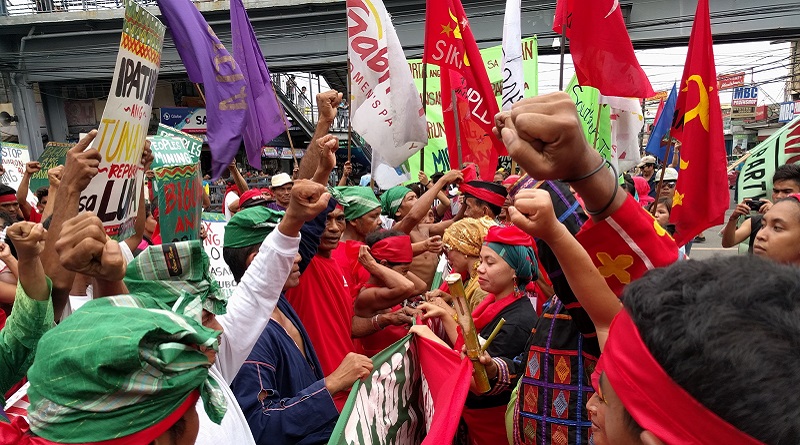 Bagong Alyansang Makabayan (BAYAN) supports the struggle for self- determination and just peace being waged by the indigenous and Moro participants of the Lakbayan ng mga Pambansang Minorya. From different parts the country, they have traveled to Manila to protest the continuing militarization and state terrorism, the plunder of their ancestral lands and territories and national oppression and discrimination.

These issues have caused both indigenous and Moro people to unite for a common struggle.

Together with the Filipino people, they are calling on the administration of President Rodrigo Duterte to address these most pressing issues and demands.
The displaced Lumad, who were forcibly ejected from their lands by the military and their paramilitary groups, seek to return to their communities and rebuild their lives, without fear from threats, harassment and death. Some have already been able to go home but many are still evacuees, unable to return due to the continued threatening presence of paramilitary groups who are protecting the interests of foreign mining corporations. Continuing killings, such as the October 11 murder of Jimmy Saypan, Secretary General of Compostela Farmers Association and outspoken critic of AGPET Mining, is a cause for great alarm.

In the first-ever Lakbayan ng Pambansang Minorya, which will be from October 12-28, 2016, more than 3,000 indigenous peoples and Moro from various parts of the country converge in Metro Manila and set up camp in the University of the Philippines – Diliman Campus to call attention to their plight.

During Martial Law, national minorities took center stage in the struggle against the Marcos Dictatorship when Kalinga leader Macli-ing Dulag’s assassination united the Cordillera people and the rest of the Filipino people in resisting the World Bank funded Chico River Dams. Today, national minorities continue to actively campaign for recognition of their right to genuine self-determination and ancestral land. They have joined national movements and formations that commonly promote indigenous and Moro peoples’ rights amid the backdrop of country insurgency programs (Oplan Bantay Laya), free trade agreements (APEC, ASEAN), and US interventionism and militarism (Balikatan exercises, EDCA/VFA).

President Duterte’s bold calls in local and international fora for righting the historical wrongs perpetrated by US imperialism, are historic firsts in the Philippines and in the global stage. The atrocities committed by US troops against the Moro people in Bud Dajo and Bud Bagsak at the start of American colonization has focused the spotlight on US military troops’ presence in Mindanao and its implications on peace efforts.

The Lakbayan ng Pambansang Minorya is calling on the Duterte administration to revoke policies and laws that continue to undermine the rights of the national minorities. TheLakbayan also supports the Duterte government’s initial calls to stop US military exercises, as well as its moves to pursue formal peace talks with the National Democratic Front and the Moro revolutionary groups. National minorities also challenge the new administration to come up with policies that correctly address their political and economic marginalization as a way of addressing the roots of national oppression.

BAYAN supports the Moro and indigenous people as they continue to declare their resistance against US imperialism and state fascism. We call on the people to walk, march, stand shoulder to shoulder and express solidarity in their aspiration for a just and enduring peace and progress.