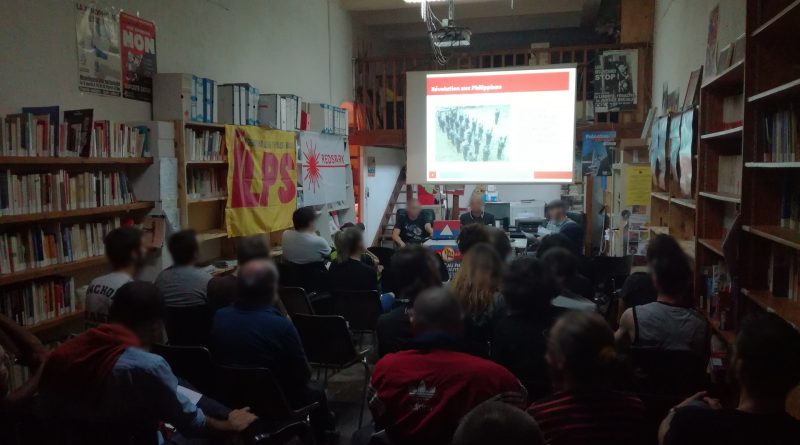 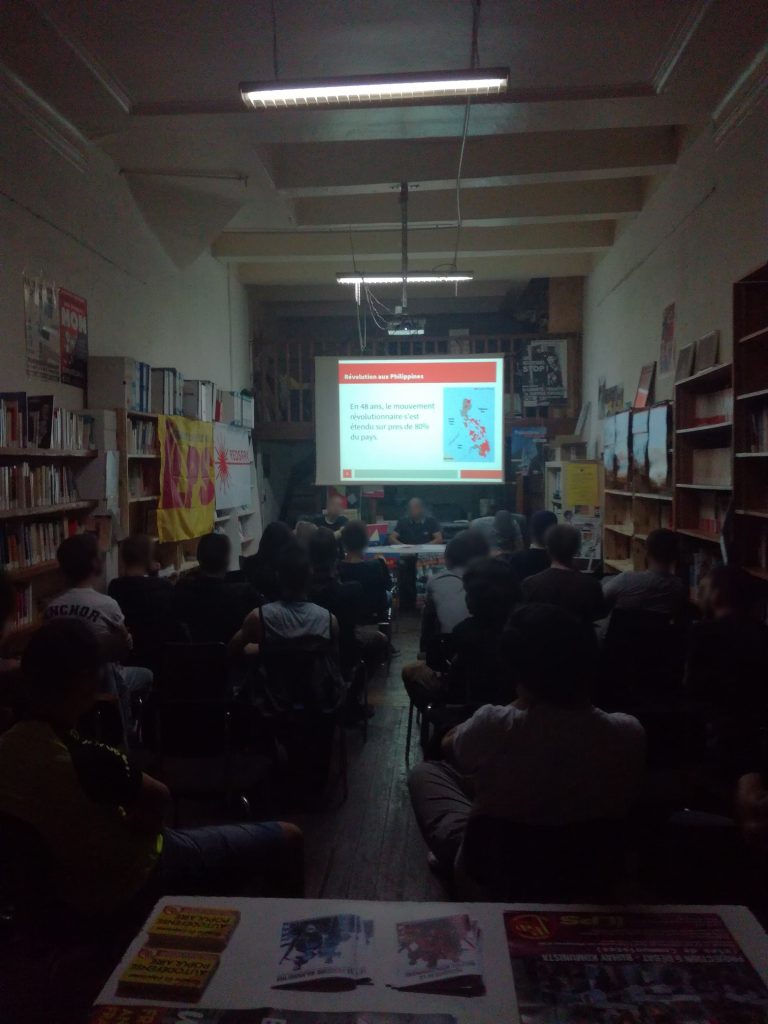 The meeting began with a short introduction presenting general information about the CPP-NPA-NDF, its history, its members, its mass base, and so on. Then, the 2 Buhay Komunista films were screened and greeted with great enthusiasm by the guests.

A message of solidarity for the meeting of the Professor Joma Sison was read between the films (see at the end of the article).

The second part of the evening continued with a speech by the ILPS comrade who introduced what is the International League of Peoples’ Struggle and then described the two most effective ways of supporting the Revolution in the Philippines – directly supporting the Revolutionary movement (through propaganda, donations of materials for schools / hospitals, financial support), and then by the struggle against imperialism, mainly French imperialism here.

Many questions were asked during the last part of the meeting, concerning in particular the US-Duterte government, the peace negotiations, Marawi and the Maute group.

SHARE REVOLUTIONARY EXPERIENCE AND LEARN LESSONS FROM EACH OTHER

Message of Solidarity to All Participants of Informational Meeting about the Philippine Revolution in Marseille, France, September 6, 2017 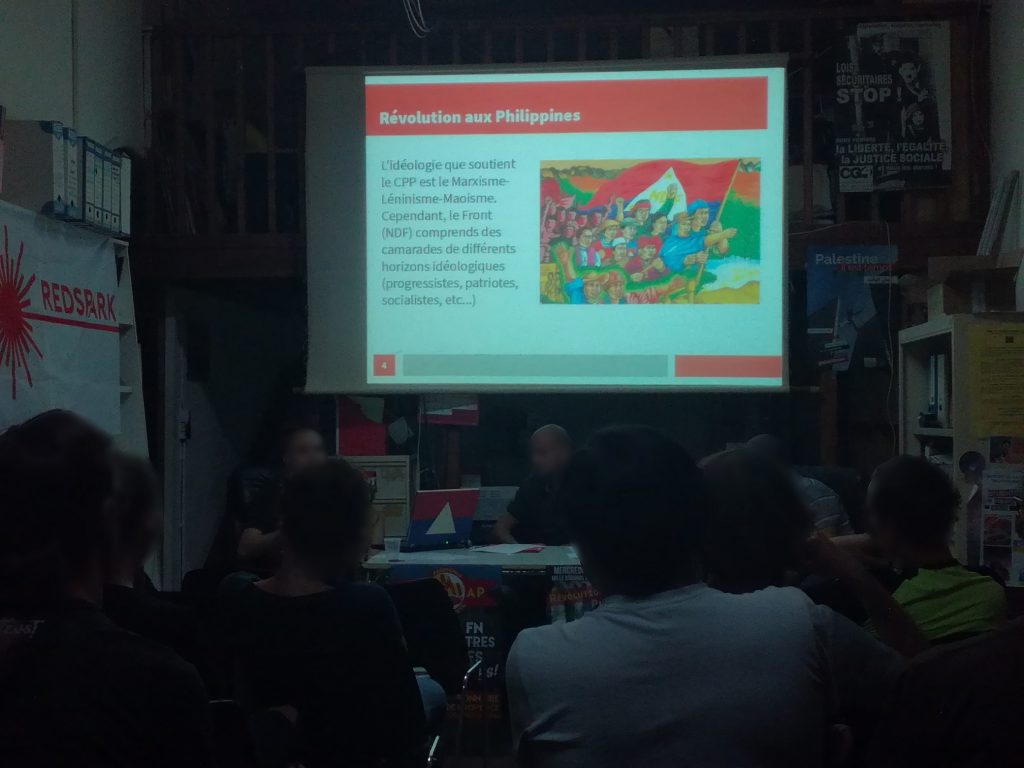 We in the International League of Peoples’ Struggle are grateful to the Front Revolutionnaire Antifasciste de Provence (FRAP) for co-hosting with us this informational meeting about the Philippine revolution.

We are happy to welcome all who are present and express our warmest greetings of solidarity. We desire to be united and fight against our common enemy, imperialism and all reaction, in order to achieve national liberation, democracy and socialism.

In charge of the meeting is Comrade Christophe Kistler, who is also the coordinator of Redspark, who has been studying the Philippine revolution for a number of years and who has cooperated militantly and fruitfully with Filipino revolutionaries. He is the translator of some of my works to French, including “Philippine Society and Revolution” which will soon be published.

The meeting today has two parts. The first is the screening of the film “Buhay Komunista” (Communist Life), which shows the militant life of the cadres and members of the Communist Party of the Philippines, the New People’s Army and the National Democratic Front in the cities and the countryside. The second is the discussion on the question of solidarity with the Philippine Revolution, and the impact of the Filipino people’s struggle on the imperialist countries. 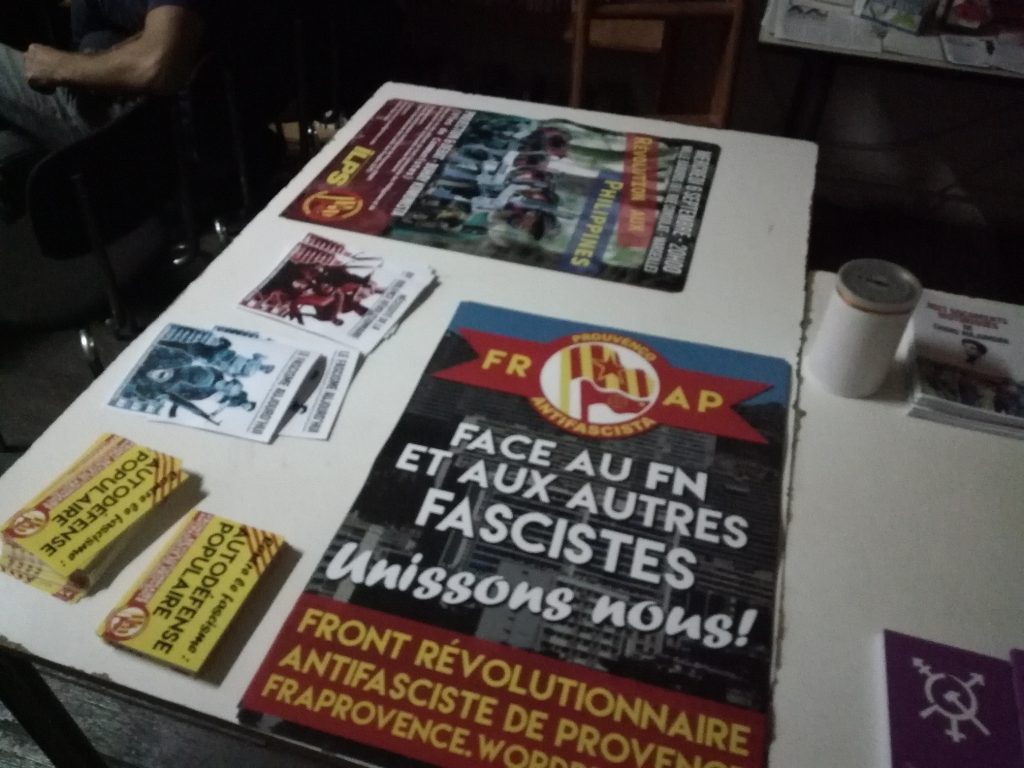 The Philippines is a semicolonial and semifeudal country under the hegemony of US imperialism and ruled by the big compradors, landlords and corrupt bureaucrats who oppress and exploit the broad masses of the people, mainly the proletariat and peasantry. Because of the history and circumstances of Philippine society, the Filipino people must wage a new democratic revolution led by the proletariat and win the people’s war against the ruling system. Consequently, the revolution can proceed to the stage of socialist revolution.

While waging the Philippine revolution, the Filipino proletariat and people win victories for the cause of national and social liberation and at the same time contribute to the resurgence and advance of the anti-imperialist and democratic mass struggles abroad and the world proletarian revolution. The victories of the proletariat and the oppressed peoples and nations in other countries become the victories of the Filipino people in the Philippines.

The revolutionary movements of the world can learn lessons from each other and lend support to each other in order to strengthen themselves. The revolutionary forces and people of the Philippines are always willing to share their experiences and ideas. They have overcome tremedous odds, persevered in struggle and grown in strength because they are led by the Communist Party of the Philippines whose ideological line is Marxism-Leninism-Maoism, whose general political line is people’s democratic revolution with a socialist perspective and whose organizational line is democratic centralism. 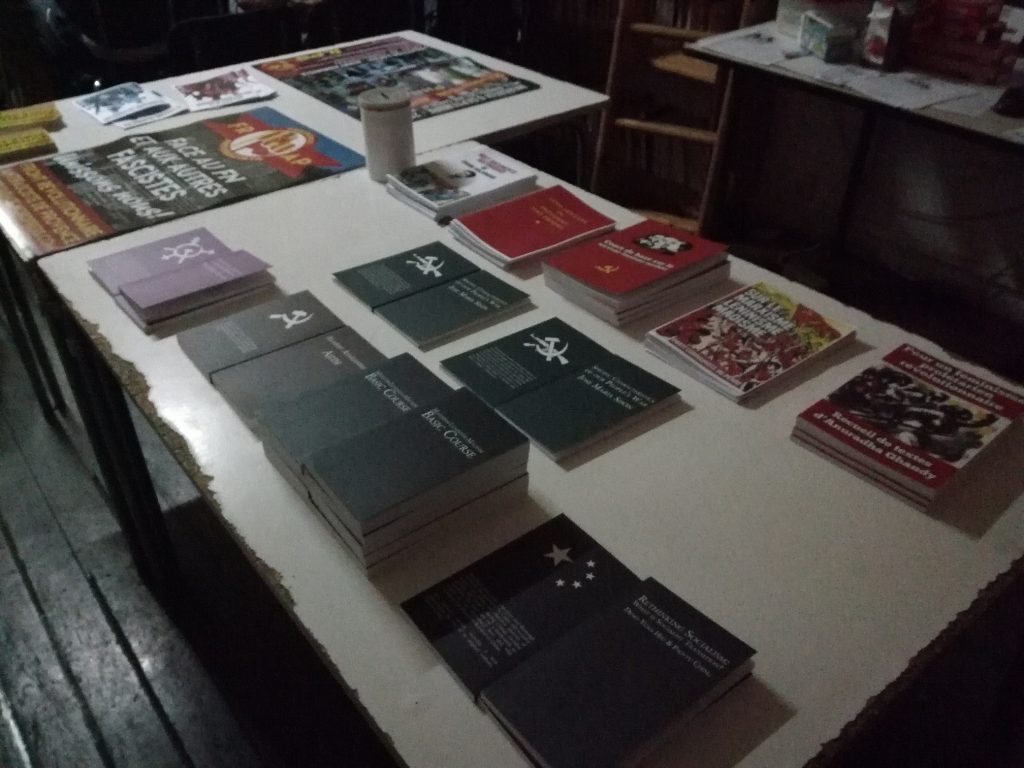 All basic contradictions in the world are intensifying: those between capital and labor in imperialist countries, those among the imperialist powers and those between imperialism and the oppressed peoples and nations. They inflict intolerable suffering on the people in terms of economic crisis, fascism, chauvinism, racism, state terrorism and wars of aggression. At the same time, they incite the proletariat and peoples of the world to fight back and wage various forms of mass protests and revolutionary resistance, including people’s war and partisan warfare reminiscent of the antifascist resistance during World War II.

We are now in a well-defined period of transition from crises, wars and social disorder to a period of revolutionary upheavals and the resurgence of anti-imperialist and socialist revolutions. The subjective forces of the revolution are steadily developing to take advantage of the ever worsening crisis conditions of monopoly capitalism and all reaction. On an precedented global scale, we are once more on the eve of great revolutionary advances and victories 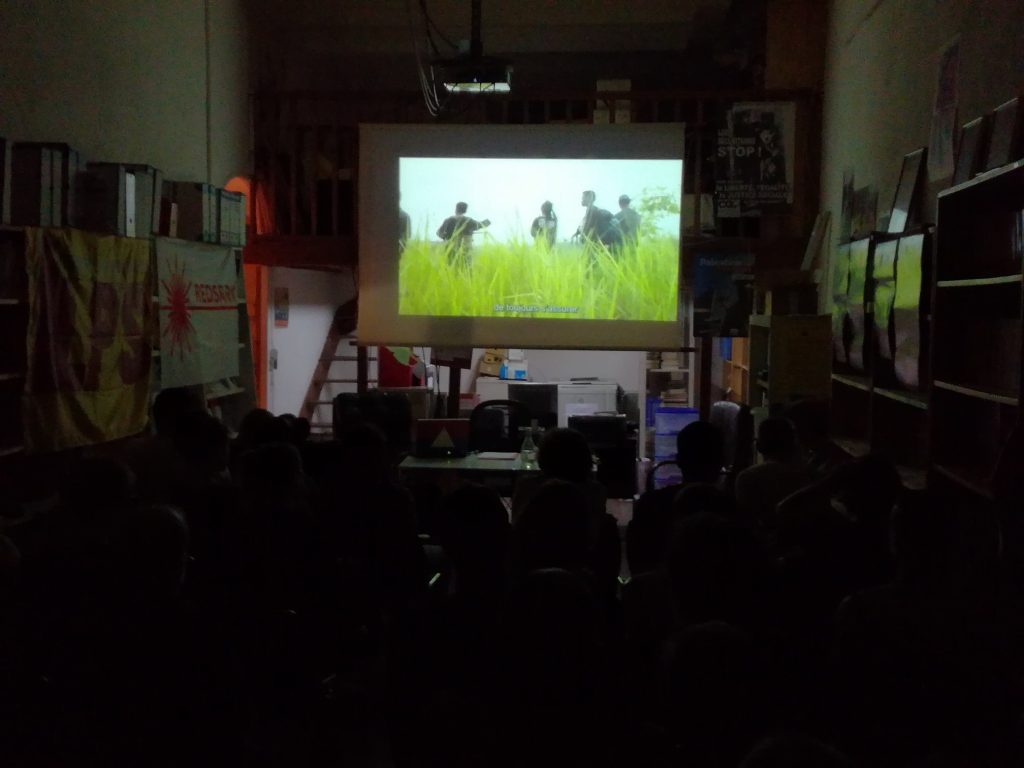