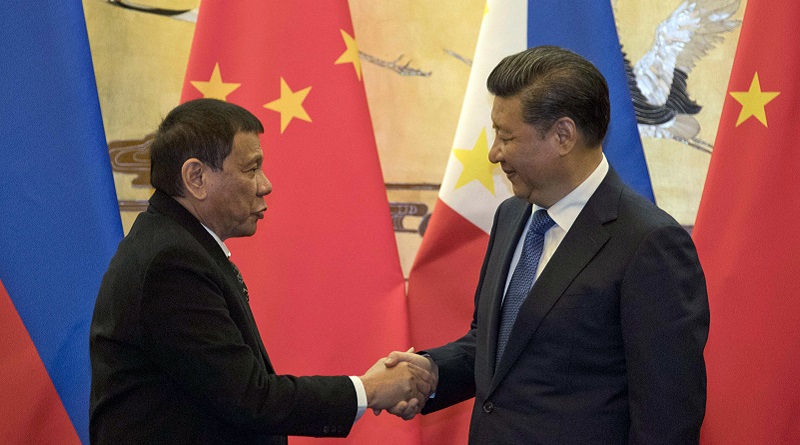 GRP President Rodrigo Duterte declared last week that he will leave the military and economic ambit of the United State and forge closer ties with China. Such a declaration is consistent with his promotion of an independent foreign policy.

This policy declaration is mostly positive because it asserts the country’s national sovereignty and independence from US dictates and impositions and thus opens potentials for substantial socio-economic changes and progress. Such a declaration boosts the Filipino people’s overriding struggle for national freedom from US imperialism.

For more than a century now, the US has prevented national industrialization and land reform thus promoting Philippine economic backwardness and keeping the country dependent on US loans and investments and imported commodities. The ruling classes of big landlords and big bourgeois compradors, bureaucrat capitalists and military officials are generally beholden to the US.

Ending US military presence is the basic condition for transforming Philippine economy and society. US military forces inside and around the country serve as outposts of US imperialism to ensure (through coercion or threat of coercion) that policies imposed by the US and the IMF-WB policies are carried out by the client-state. Duterte must end this foreign military presence.

His declaration of leaving the circle of US power is, thus, mostly positive as this will create the basic conditions for the positive transformation of Philippine society. He must immediately follow-through with steps to concretize this declaration.

The revolutionary forces welcome his declaration to end all foreign military presence within the next two years. Immediately, he must ask the US to dismantle all its military bases and facilities inside Camp Aguinaldo, Camp Navarro in Zamboanga and other AFP camps and cancel all joint military exercises which primarily serve the forward deployment schemes of the US. He must end permanent “rotational presence” of US troops.

One of the consummate patriotic act that Duterte can do is to abrogate the Enhanced Defense Cooperation Agreement (EDCA), the Visiting Forces Agreement (VFA) and Mutual Defense Treaty (MDT).

He must also demand the US, as well as Japan and other countries, to stop its military patrols in the South China Sea to lower tensions which preempt and undermine bilateral and multilateral talks by countries with overlapping claims. As to the matter of future humanitarian assistance, he can ask the US government to deliver these via civilian organizations (such as the Red Cross) or course this to the Philippine government.

For long, the US imperialists have molded Filipino consciousness to conform to US interests and tastes. The dominant pro-US mentality of the Filipinos is being used by the US and its agents to undermine his declaration for an independent foreign policy and decision to leave US imperialist ambit.

Duterte must promote the unity of the Filipino people behind the cause of anti-US imperialism. He must work with the patriotic forces in an education, information and cultural drive with an aim of promoting nationalism. Such a campaign must isolate and oppose the economic, military and politico-cultural agents of the US and undertake concrete steps to effect the removal of US military troops and facilities and put an end to US political and military intervention.

The national democratic forces must aim to mobilize the Filipino youth in great numbers in a renaissance of patriotism and service to the people.

There must be a review of school books especially those on history to show the brutalities of US colonialism and continuing history of neo-colonialism and extol the heroism of Filipino resistance fighters.

US imperialism remains to be the dominant force within the ruling reactionary state. It has the traditional loyalty of the majority of the ruling classes, especially among the big landlords.

Above all, it has the Armed Forces of the Philippines (AFP) which serves as the strongest pillar of US rule in the country. It is the generals and ex-generals within and outside the Duterte regime who are vigorously pulling-back the assertions for an independent foreign policy. They must be resolutely opposed and overthrown.

In the economic field, the Duterte regime must reverse the neoliberal policies imposed by the US on the Philippines which had long promoted backwardness and dependence.

It must put an end to the policies of trade and investment liberalization, deregulation of state controls and labor and environmental standards, privatization of public utilities and services (from water to education and health) and denationalization of ownership which give foreign capitalists control of key sectors of the economy such as power generation and distribution.

He must end the automatic allocation of as much as 30% of government funds to service interest and principal payments of anomalous loans.

To maintain the loyalty of the landlord class, the US imperialists have long stood against genuine land reform. Millions of hectares of land continue to remain under the economically backward landlord class. Tens of millions of peasants suffer under the yoke of feudal and semifeudal oppression.

It would serve well the Duterte regime to heed the demand of the peasantry to breakup the haciendas and the power of the landlord class and undertake genuine land reform. Land must be distributed to the peasant tillers of land.

Genuine land reform is the most important democratic demand of the Filipino people as it addresses the problem of the biggest sector in Philippine society. By liberating millions of peasants from feudal and semifeudal oppression, land reform will serve as the biggest impetus to economic progress.

In his visit to China, Duterte was reported to have secured as much as $24 billion in investments and loan pledges. The amount of planned investments ($15 billion) represents a 400% jump from last year’s investments from China. It is indicative of how much interested it is in wresting the Philippines from US sphere of influence and transforming the country in accordance with the China blueprint for a Factory Asia.

In themselves, the planned investments do not indicate any plan to build an integrated industrial economy, much less, support genuine land reform. In fact, the planned infrastructure and manufacturing facilities and power projects remain consistent with the prevailing import-dependent and export-oriented economic system.

At this point, the large infusion of foreign capital poses only clear benefit for the local big bourgeois compradors–the class of local big capitalists who serve as partners of foreign monopoly capitalist in the exploitation of local labor power for semi-processing production as well as in large commercial operations for distribution of imported commodities.

China is a burgeoning imperialist power with definite geopolitical aims. At this time of US strategic decline, China seeks the neutralization of the Philippines as a military stronghold and strategic base of the US from which it can launch encirclement operations against China. These aims are congruent with the Filipino people’s aspiration for national freedom and to promote an independent foreign policy.

Duterte’s declaration to end US hegemony in the Philippines would be even more positive if he can draw Chinese and international support for programs supporting the people’s livelihood (education, public health, food subsidies) and attenuate the impact of prevailing neoliberal policies that favor foreign monopoly capitalist investors.

Even more importantly, he can support the democratic aspirations of the Filipino people for genuine land reform and genuine national industrialization to build a socio-economic system that can stand on its own, non-dependent on foreign aid, investments and loans and can self-sustain and serve primarily the interests of the broad masses of peasants and workers.

To help transform the Philippines into a solid bastion of anti-US imperialism, China can allow room for the development of the local economy in terms of its manufacturing capacity, rural production and expanding domestic market.

China is always seeking areas of investments with lowest wages. But with overriding aims of helping end US hegemony over the Philippines, it can accede to the Filipino people’s demand for higher wages and such basic workers’ rights to job security, to unionize and strike; and support the clamor for genuine land reform and promotion of the people’s welfare (free education, universal health care, lower prices etc).

China can choose to lift off its weight from the country to provide space and opportunities to boost efforts of local capitalists to engage in production and promote national industrialization.

The Duterte regime has declared its determination to break free from US sphere of influence. It must establish the country that is not dependent on any power. Furthermore, it can forge and strengthen a patriotic united front by supporting the people’s basic demands for genuine land reform and national industrialization.

They must direct their militant struggle against the pro-US forces especially in the military and in the economic agencies of the regime who have strongly opposed Duterte’s patriotic declarations.

The revolutionary forces are open to more firmly establishing a patriotic alliance with the Duterte regime through peace negotiations to forge agreements. The New People’s Army (NPA) is the Filipino people’s strongest bulwark of patriotism. Under the leadership of the CPP, it must continue to strengthen itself through active recruitment, training and arming thousands of new Red fighters in preparation for giving battle to the forces opposed to the cause of national liberation.

Source: Communist party of the Philippines