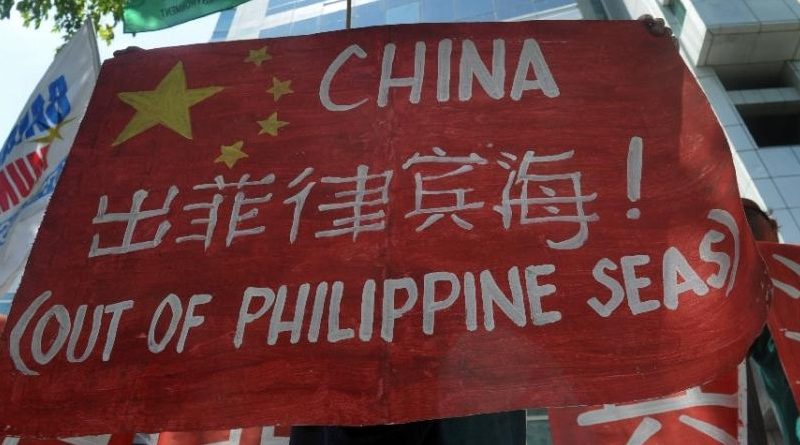 Duterte’s claims that he does not want the Philippines to be dragged into a possible break-out of war in the South China Sea (SCS, also referred to as the West Philippine Sea) are belied by his actions. In fact, his double-sided betrayal of the country’s national sovereignty puts the country at great risk of getting caught right in between a likely outbreak of armed hostilities between the American and Chinese imperialists.

Duterte’s shameless subservience to the US, sell-out of Philippine sovereignty to China and inability to pursue a policy of active peace has led to his failure to oppose the militarization of SCS by both powers. The country’s territories, both land and sea, have become among the potential battlegrounds, both as targets and platform of war to the detriment of the Filipino people’s national sovereignty.

On the one hand, Duterte is set on surrendering the country’s sovereign rights to China with the planned signing of a contract for “joint exploration” of SCS and “co-ownership” with China, which China insists on being presupposed on its sovereignty over the territories. This will amount to a complete sell-out of trillions of dollars of Philippine marine and mineral resources in the SCS in exchange for a few billion dollars worth of high-interest loans for corruption-laden infrastructure projects. By going on a binge of borrowing China loans, Duterte will make the Philippines subject to Chinese debt-bondage. The decision to give the state-owned China Telecom franchise to operate in the country further gives China increasing control of the country’s economy.

Hiding behind the claim that “the Philippines cannot afford to go to war with China,” Duterte, moreover, has chosen not to raise a whimper of protest in the face of the frenzied Chinese construction of military facilities and territorial assertion within Philippine sovereign seas and maritime claims. Duterte is complicit in China’s militarization of the SCS.

On the other hand, he is complicit as well in the US parallel militarization of the SCS. He has allowed more and more US nuclear-capable warships to use Philippine docks as military facilities and springboards (in what are benignly referred to as “routinary port calls”) in line with its so-called “freedom of navigation operations.” These involve the deployment of armadas of US aircraft carriers in the SCS and elsewhere in the Pacific. The US aim is to project military power, contain the expansion of China and challenge its power in the SCS even at the risk of sparking armed confrontations.

Duterte is a hypocrite for pompously declaring he does not want any country stockpiling weapons in Palawan, when, in fact, he has not spoken out against US involvement in the construction of the Ulungan Bay Naval Base and other naval bases in Palawan which the AFP has long “offered” for use of the US military under the Enhanced Defense Cooperation Agreement (EDCA). He has also allowed the US to build its military facilities in at least five other AFP camps for stockpiling of weapons and stationing of US troops. The US claims these facilities store material for “humanitarian and disaster response” to conceal its real military purposes.

At the same time, Duterte has allowed the US to more and more tighten its operational control of the AFP through so-called joint trainings and providing it with US weaponry to ensure “interoperability” where AFP units can easily be integrated with US operations. There are 200-300 American military advisers permanently stationed in the Philippines under the US Operation Pacific Eagle-Philippines (OPE-P). The US military is on top of AFP “counter-insurgency” operations, providing it with field equipment, drones, trainings for special combat units as well as advise and equipment for the AFP’s information and social media warfare. Duterte has made no attempt to revoke the various one-sided military treaties with the US such as the Mutual Defense Treaty, the Visiting Forces Agreement and the EDCA assuring the US of continued military dominance.

For being a US semicolony in the past seven decades, the Philippines has long been used as a pawn in US hegemonism. In the 1950s, US military bases in the Philippines were used as jump-off points for deployment of American troops in its interventionist war in Korea. In the 1960s, the country was used as a platform for its large-scale intervention in Vietnam. In both US wars of intervention in Korea and Vietnam, the Philippine government sent troops and personnel. In the 1970s and 1980s, in its interventionism in the Middle East. It is widely believed that the US deployed nuclear weapons in Clark and Subic but kept a policy of “neither confirming nor denying” the matter. In the 1980s, it also used the country to organize the Abu Sayyaf and recruit so-called “jihadists” in its war of subversion in Afghanistan.

As a US semicolony, the Philippines has been a constant target of US imperialist archrivals and its declared enemies. In World War II, the country was attacked and occupied by Japanese imperial forces. In the 1960s and 1970s, Clark and Subic military bases were always among the targets of Russian missiles and nuclear war heads.

A few weeks ago, a former US military general in Europe issued a statement foreseeing a US-China war in 15 years. Regardless of the time frame, an international armed conflict among imperialist powers is indeed the likely outcome of the rising contradictions and conflict over trade, as well as control of spheres of influence and fields of investments.

Amid heightening US and China economic and military tensions and worsening crisis of the world capitalist system, the Philippines is becoming both a tool and target of both imperialist powers. Without a radical shift in Duterte’s policy of subservience to imperialist powers, the country will ultimately be dragged into the middle of future inter-imperialist conflicts.

This can only be prevented by heeding the Filipino people’s demand that Philippine national sovereignty be firmly upheld and a policy of peace and non-alignment be actively pursued.