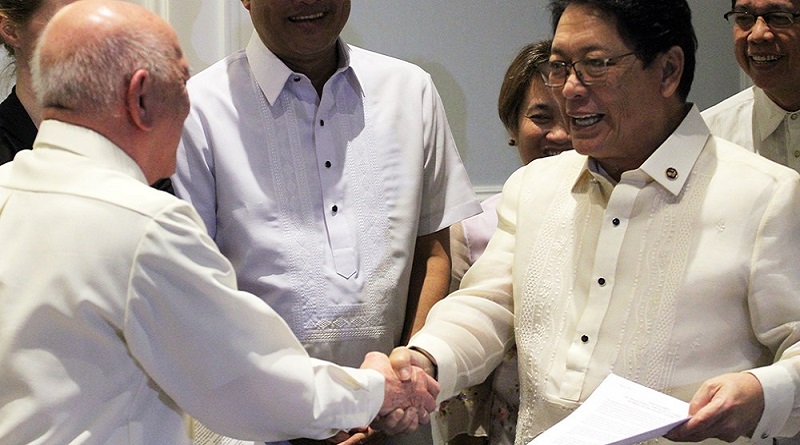 ROME, Italy—The National Democratic Front of the Philippines (NDFP) and the Government of the Republic of the Philippines (GRP) concluded their “difficult but successful” round of formal peace talks a week after it opened, five days of which were spent in “exacting” negotiations.

The parties said they achieved advances on six major issues listed on their January 18 common agenda:

The parties likewise talked about the release of the 392 NDFP-listed political prisoners with the GRP again committing to facilitate the release of three remaining NDFP consultants Eduardo Sarmiento, Emeterio Antalan and Leopoldo Caloza through presidential clemency or other legal means.

The GRP and the NDFP also discussed the possible implementation of socio-economic projects in relation to the Joint Agreement in Support of Socioeconomic Projects of Private Development Organizations and Institutes of March 16, 1998.

“The parties have been constructive and solution-oriented. And it is very clear to us as Third Party Facilitators that both sides are genuinely committed to work towards achieving peace,” Royal Norwegian Government Special Envoy to the Philippine Peace Process Elisabeth Slattum said.

“Well, it has been difficult but successful. That is the only way I can describe this round,” NDFP chief negotiator Fidel Agcaoili said.

Agcaoili clarified though that he expected the successful conclusion of the negotiations on the supplemental guidelines on the JMC, the tentative agreement on the PCR, the movement on the discussion on SER as well as on its ground rules.

As expected, negotiations on socio-economic reforms took center stage in the Rome round of talks.

“The RWCs-SER agreed in principle to the free distribution of land to farmers and farm workers as part of the governing frame of CASER (Comprehensive Agreement on Socio-Economic Reforms),” the parties’ Joint Statement on the Successful Third Round of Formal Talks Between the GRP and NDFP in Rome, Italy said.

Earlier, the RWCs-SER reaffirmed their earlier agreement on the Preamble and the Declaration of Principles (Part I) as the framework of the CASER.

They also identified points of agreement on Bases, Scope and Applicability (Part II) and reaffirmed their approval of Part II entitled Desired Outcomes.

The committees also reached a common understanding on the general features of the agrarian problems in the Philippines, incorporated in the Part IV of the discussions which included land distribution issues.

“While our discussions in the past days have been exacting, we were not deterred from exploring new ways and other platforms to advance the talks,” GRP panel chairperson Silvestre Bello III said in describing the success of the round.

The CASER ground rules “display our seriousness to tackle the agreement on socio-economic reforms,” Bello said.

The eight page Joint Statement however is silent on the announced plan of the GRP to request the United States government to delist NDFP Chief Political Consultant Jose Maria Sison from its terror list.

Sison was absent in a formal peace talks closing ceremony for the first time in 25 years,

“We would like to inform you that the chief political consultant of the NDFP, Prof. Jose Maria Sison, was hospitalized last night,” Slattum said.

“But we can assure you that he is recovering well.  And I think I speak for everybody when I say we hope that he would be back on his feet in the next few days,” she added to loud applause in the hall.

Bello asked the participants and witnesses of the closing ceremony to offer a minute of prayer for the fast recovery of Sison.

Bello and GRP panel member Angela Trinidad had to leave the ceremony early to fly to Kuwait to try to save the life of a Filipino set to be executed in the said country. # (Raymund B. Villanueva)