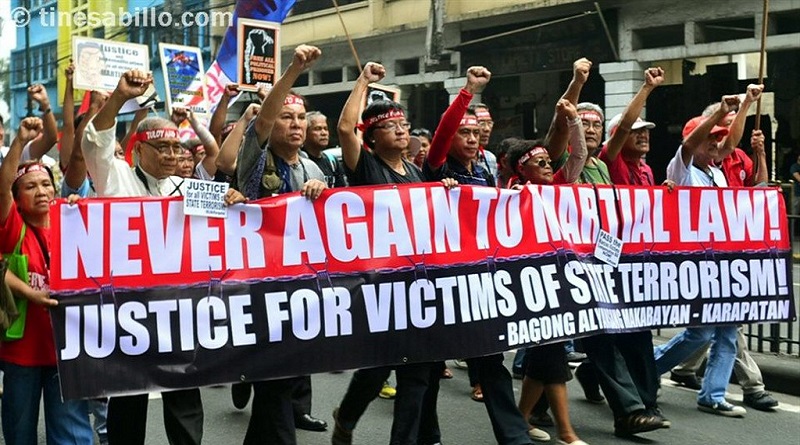 The Communist Party of the Philippines (CPP) today extended its support for the protest actions set for tomorrow at Luneta to demonstrate the people’s indignation over the hero’s burial given by the Duterte government to erstwhile dictator Ferdinand Marcos last week.

The CPP urged the protesters to demand the Duterte regime to reverse the historical wrong it committed against the people and demand an end to all the legacies of martial law.

“By protesting the hero’s burial of Marcos, the Filipino people, especially the younger generation, are demonstrating how they have not forgotten the brutalities and crimes of the Marcoses,” said the CPP.

“Beyond recalling Marcos’ crimes of the past, they must also unite to fight all the brutal legacies of martial law which persist and continue to cause grave suffering against the people,” said the CPP. “The fascist ideology promoted by the US imperialists and the Marcos regime remains deeply ingrained among the officials of the AFP serving as its guiding dogma in committing abuses and
violations of the people’s rights in the countryside.”

“The Filipino people must demand the Duterte regime to reverse the historical wrong which it committed by exalting Marcos with a hero’s burial,” said the CPP. The CPP said various organizations and personalities calling for the digging-up of Marcos’ remains from the Libingan ng mga Bayani “must vigorously demand as
well the Duterte regime to end to all the legacies of martial law.”

The CPP said that “among the starkest hallmarks of martial law are the hundreds of political detainees who remain in prison and the continuing armed suppression of people’s resistance, especially in the countryside.”

“The people must demand Duterte to prove himself not a Marcos by fulfilling his promise to release all political prisoners en masse through an amnesty proclamation,” said the CPP.

“They must also demand Duterte to end Oplan Bayanihan, the military’s current war of suppression, which is being waged relentlessly in the countryside, despite the ceasefire declarations unilaterally issued by Duterte and by the CPP,” added the CPP.

“The CPP urges the protestors in Metro Manila and other cities demonstrating against the hero’s burial of Marcos to unite with the people in the countryside who continue to suffer under martial law conditions with the presence of armed soldiers of the AFP who maraud and ravage their communities with the aim of suppressing the struggle of the peasant masses for genuine land reform and the minority people for self-determination.”

CPP: Beyond the realm of what is legal

At the same time, the CPP rejected Duterte’s legal justification of his order to give Marcos a hero’s burial insisting it is in accordance with the law for Marcos to be interred at the Libingan ng mga Bayani because he was a former president and soldier.

“Duterte can propound a thousand legal questions and he would not get to the meat of the matter because the issue of exalting Marcos as a hero is way beyond the realm of what is legal or not,” said the CPP.

“It is a question of whether one sides by the dictator who protected the interests of foreign big capitalists, the big bourgeois compradors, the big landlords and bureacrat capitalists through the brutal suppression and exploitation of the people.”

“Indeed, by exalting Marcos with a hero’s burial, Duterte showed utter insensitivity and disrespect to the tens of thousands of victims of cruel suppression by the US-backed Marcos dictatorship and the collective suffering of the Filipino people under its rule of unmitigated plunder,” added the CPP.