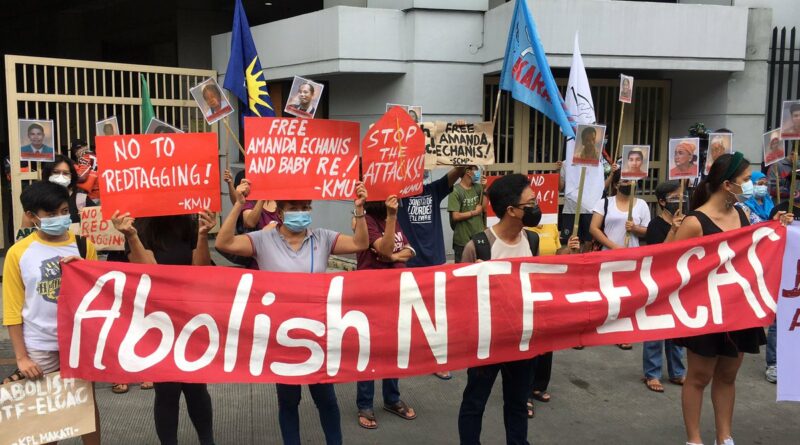 The Communist Party of the Philippines (CPP) enjoins all democratic forces in the country to unite and demand the abolition of the National Task Force to End Local Communist Armed Conflict (NTF-ELCAC). It is the command-center of red-tagging and the mastermind of the wave of killings and arrests. It is a cesspool of corruption.

Its structure and powers, as stipulated by Duterte’s Executive Order 70, make it practically a civil-military junta, with Duterte as head and military officers taking over the helm of the civilian functions of the Philippine government. Promoting the military shibboleth of “whole of nation approach,” the NTF-ELCAC aims to put the entire country under its powers.

The Party supports the call of a number of sectors and democratic-minded individuals and parties for the defunding of the NTF-ELCAC. Under Duterte’s 2021 budget, it was allotted a ₱19.6 billion fund, a veritable military pork barrel. Amid the worsening crisis and demand for bigger economic aid, more than ₱10 billion was released to the NTF-ELCAC last April, putting to question the spending priorities of the Duterte government.

The NTF-ELCAC’s so-called “Barangay Development Program” (BDP) reeks of corruption. More than one fourth of the BDP’s ₱16.4 billion budget has been allotted to Region XI, with close to 40% going to barangays in Davao City, Duterte’s hometown. Funds are allotted to barangays “cleared of NPA” but the list include barangays which are not at all NPA areas. The NTF-ELCAC distributes funds to its select barangays to fund unprogrammed projects without proposals or feasibility studies as is the typical practice.

The demand for defunding the NTF-ELCAC is instigated by its wanton red-tagging against various individuals and personalities engaged in social action. It has red-tagged even the organizers of community pantries, which have recently sprouted across the country in the face of widespread loss of income and hunger and failure of the Duterte government to sufficiently address the needs of the people.

The NTF-ELCAC has blood on its hands. Under its authority, the Philippine National Police (PNP) and Armed Forces of the Philippines (AFP) have carried out bloody campaigns of killings and mass arrests against democratic organizations. The NTF-ELCAC itself is behind the coordinated killings such as those in Negros since end of 2018, in Panay, Bicol and Southern Tagalog. The NTF-ELCAC has also implemented a policy of “take no prisoners” against CPP leaders and NDFP consultants as it carried out the abduction, torture and bloody liquidation of active and retired revolutionaries.

The NTF-ELCAC is not only engaged in red-tagging, corruption and bloody suppression, it has, in fact, usurped the authority of the entire government with its system of government clusters that are overseen by assigned military or ex-military officers. Local government units are especially peeved over how they are being dictated upon by the NTF and RTF-ELCACs and their priorities distorted by the aims of the military.

The NTF-ELCAC is the antithesis of the democratic tenet of civilian authority over the military. This principle is undermined by the NTF-ELCAC as the military is extended extraordinary bureaucratic privilege and political power to determine policy and programs.