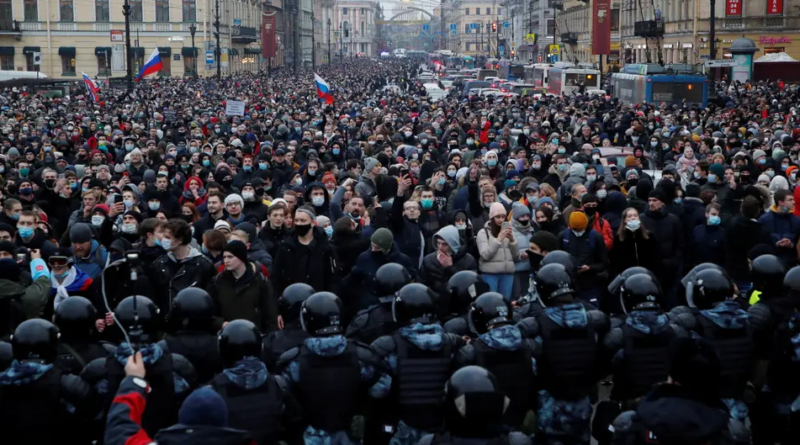 January 24, 2021: All democracy-loving people must support and emulate the mass protest actions in Russia against the Putin fascist regime, particularly against the plans of the dictator to extend his power by seeking a third term.

Hundreds of thousands of people, with a large contingent of youth, are courageously protesting in the streets of Moscow and other cities despite violent suppression by state police and despite freezing temperatures in some cities reaching -50 degrees celsius. More than 2,500 have been arrested.

Protests were sparked by the arrest and imprisonment by the fascist regime of its critic and opposition leader Alexei Navalny. Navalny just arrived home from Germany where he underwent treatment after being poisoned in jail by the FSB (the Russian Federal Security Service, counterpart of the US CIA ).

But the real demand of the Russian masses is the ouster of the dictator Putin. They are fed up with the corruption of the Russian bureaucrats under Putin, who are in connivance with the big capitalists and criminal syndicates. Russia ranks fourth among the countries with the highest cases of Covid-19 due to the government’s failure.

Like the Filipino people, the people of Russia are oppressed under a tyrannical, corrupt and criminal regime. Vladimir Putin has remained in power for more than 20 years using state terror to silence or liquidate anyone who resists. Duterte openly idolizes Putin and mimics his methods of clinging to power through all-out state terrorism.

The Filipino people must emulate the Russian masses in their show of determination to fight for freedom and democratic rights under a repressive tyranny. The Filipino masses must act in their numbers to fight all forms of repression and all attempts of Duterte to extend his power using different tactics such as “cha-cha” or having his ambitious daughter Sara seat in his throne in 2022.