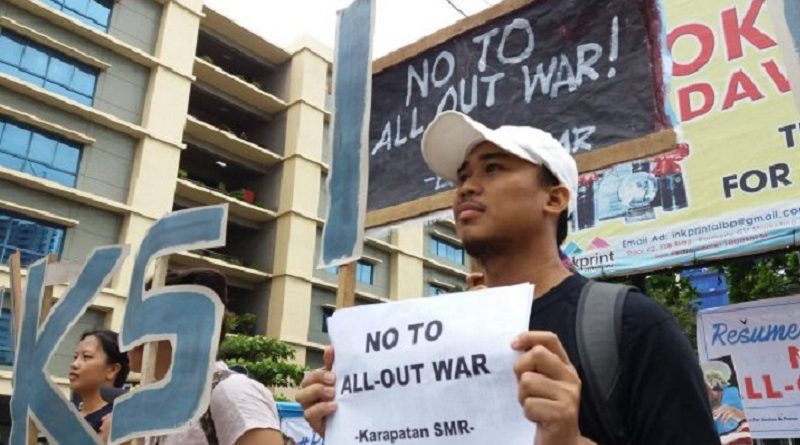 People's War Philippines
February 15, 2017February 15, 2017 C. Kistler CPP-NPA-NDF, Duterte
The Communist Party of the Philippines (CPP) today called on the Filipino people to protest the police and military crackdown after at least 19 individuals, mostly activists as well as civilians, who were arrested in Metro Manila and other parts of the country in a span of just one week since the Duterte regime terminated peace talks and declared an “all-out war” against the revolutionary forces last February 7.

“The Party decries the attacks against activists and civilians,” said the CPP.

“These attacks are starkly reminiscent of the 2005-2009 political crackdown by the Arroyo regime,” pointed out the CPP. “This campaign of suppression bears the signature of National Security Adviser Hermogenes Esperon and AFP chief General Año, both of whom are known fascist zealots and key operators of the dirty war of the US-Arroyo regime against those they brand as enemies of the state.”

“It is apparent that General Año’s promise to ‘hit hard’ is taking the form of a crackdown and all-out war by security forces against activists and civilians,” said the CPP. “The military and police campaign is further isolating the Duterte regime from the Filipino people.”

The latest victim of the crackdown is Ferdinand Castillo, a campaign officer of Bayan-Metro Manila, who was arrested last February 12 in Sta. Quiteria, Caloocan City, and slapped with trumped-up charges of double murder and multiple attempted murder. Over the previous days, police and military operatives have arrested NGO worker Rogina Quilop in Bacolod City, Sarah Abellon-Alikes, together with Promencio Cortez and Marciano Sagun in Itogon, Benguet, and Edison Villanueva of Gabriela-Southern Tagalog in Sta. Cruz, Occidental Mindoro, and Jacinto Faroden, in La Trinidad, Benguet.

“As in the past, the police and military are filing trumped-up criminal charges against activists and NGO workers to prolong their detention,” said the CPP.

“In a matter of a few days, the ‘all-out war’ declared by the Duterte regime’s security officials has already resulted in grave abuses of human rights of civilians and entire communities,” pointed out the CPP. In Mindanao, continuing AFP combat operations have resulted in mass civilian evacuations from their communities in all major regions.

“The CPP denounces the aerial bombing campaign carried out by the AFP against the B’laan and Kaolo people in Sarangani province.” Since February 11 six aerial bombings were conducted by the AFP in Sitio Tangis and Sitio Kindag in Barangay Datal Anggas in Alabel, Sarangani. These have displaced more than 100 Lumad families, mostly B’laan and Kaolo. Following this, the 73rd IB arrested eight civilians, tortured and coerced them into serving as guides in the military’s operations.

On February 11, in Capiz province, a farmer, Orlanda Eslana, was shot dead, while five others were wounded when armed personnel of the 300-hectare Hacienda Montecarba in Pilar town opened fire at a campout by farmer beneficiaries. The campout was set up since February 5 by 68 farmers and their families in order to reclaim their land from the Tans, the hacienda’s owners.

On February 6, former Bayan Muna coordinator Glenn Ramos, 40, was killed Tokhang-style in his home in Maa, Davao City by the PNP CIDG XI and SWAT. Ramos was reported by the PNP as having “violently resisted arrest.”

On February 3, a tribal leader was shot dead in Quezon, Bukidnon. Renato Anglao, 42 was shot by three unidentified men riding in tandem. Anglao is an active member of the Tribal Indigenous Oppressed Group Association (TINDOGA), an indigenous peoples’ organization of the Manobo-Pulangion in Barangay Botong, Quezon which opposes plantation in their ancestral land. The group is also accused of supporting the New People’s Army. Anglao was on his way back home with his wife and child after buying school supplies at the town center when the men drove to their side and shot him twice in the head.