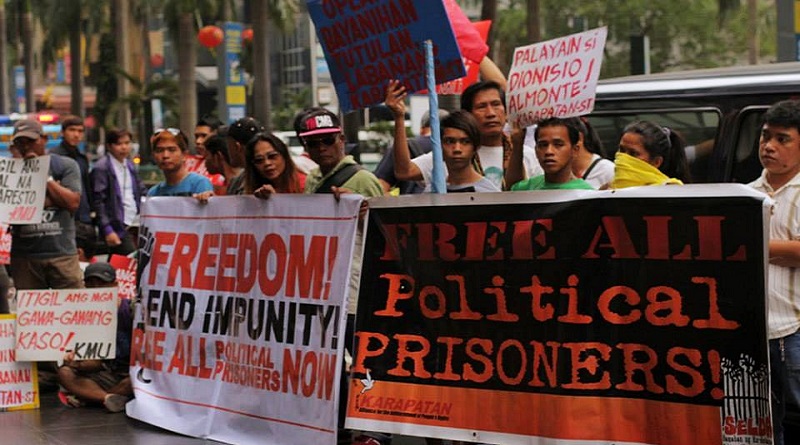 Davao City — The Communist Party of the Philippines (CPP) blasted President Duterte for his supposed failure to fulfill his promise to release hundreds of political prisoners by Christmas.

In a statement published on CPP.org on December 22, the CPP said that its leaders have exercised flexibility in their negotiation with the government (GRP) despite alleged ceasefire violations committed by the Armed Forces of the Philippines (AFP).

The statement also read that the New People’s Army (NPA), the armed wing of the CPP, has prevented armed confrontation with the AFP troops despite the alleged violation.

The National Democratic Front or NDF has ordered a suspension of offensives against the military soldiers since August 21, the longest in the history of NPA, according to the CPP.

Duterte restored the GRP’s ceasefire declaration on the following day.

Both parties are hopeful that a bilateral ceasefire document would be forged during the resumption of peace talks on January 18 to 25 in Rome, Italy.

But the CPP lashed out at Duterte for changing his mind about releasing political prisoners without the bilateral ceasefire document.

GRP panel member Antonio Arellano said last week that they are working on the release of the political prisoners but it will take time due to the judicial process. “Sickly and elderly will be prioritized for release,” Arellano said.

Meantime, the chief of the AFP’s Public Affairs Office (PAO) said that the President’s declaration of a Holiday unilateral truce with the communist front is no different from the unilateral ceasefire he declared last August as part of the continuation of the peace talks.

Marine Col. Edgard A. Arevalo, said the current unilateral ceasefire which President Duterte revived to help jumpstart the continuation of peace talks is still in existence and the declaration of the Holiday truce is just to show the Reds of the importance of it.

“It’s (holiday unilateral truce) is no different from the previous one declared with the CPP-NPA-NDF as this is still is in existence. Looking at the declaration, the Chief Executive just wants to emphasize the importance of inclusive period which is within Christmas and New Year, dates that are important not only in the country but in the whole world,” Arevalo said.