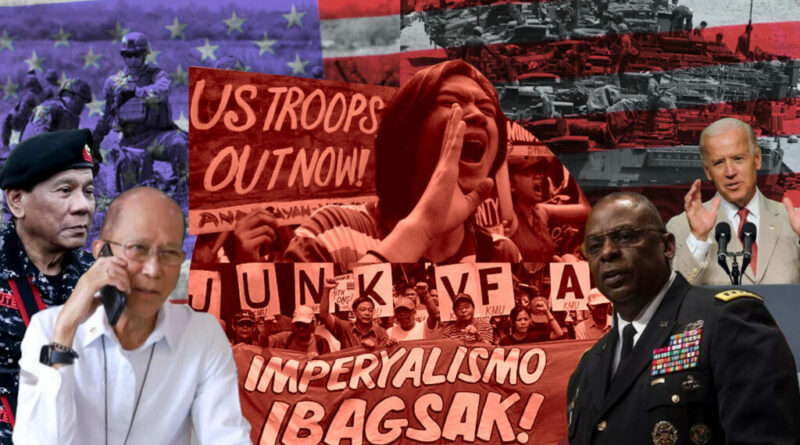 In a phone call by newly-appointed US Defense Sec. Lloyd Austin with Philippine Defense Sec. Delfin Lorenzana, the US official reportedly reaffirmed its “military alliance” with the Philippines. The clear aim of Sec. Austin is to secure its military agreements with the Philippines which make the country a strategic outpost for overseas US military forces in the Asia-Pacific. This is in line with preparations being made by the US military for possible mobilization to secure American economic and geopolitical interests in the face of heightening conflict with rival imperialist China.

1. It is crass realpolitik for Sec. Austin to secure US ties with the AFP while remaining silent about rampant abuses of human rights committed by military and police forces of the Duterte regime. He seems to ignore the fact that the Duterte regime has been repeatedly criticized in the US and around the world for its bloody campaign of mass murder, relentless red-tagging and gross rights abuses against the Filipino people committed in the course of the sham war on drugs and anticommunist counterinsurgency.

Sec. Austin is displaying clearly how US strategic military and economic interests are far more important than matters of human rights abuses when these are committed by their allies.

2. Clearly acceding to the US position, Lorenzana declared yesterday that the military and defense establishment want to continue with the VFA, which the Duterte government has put under suspended termination since February last year. Lorenzana, a longtime US yes-man, wants the VFA to continue to help the US strengthen its position in the Asia-Pacific, as well as to ensure that the AFP will continue to get US military financing and supply of weapons, from which military contracts he pockets millions of pesos in kickbacks.

Recall that Duterte made a show of the VFA “termination” with the aim of making China believe of Philippine shift of alliance in the hope of securing the deals and loan contracts promised by China. On the other hand, he made use of it as a negotiating leverage to seek more US military funding and support.

3. Under previous president Trump, the US government started in 2017 the so-called Operation Pacific Eagle-Philippines (which replace the previous Operation Enduring Freedom-Philippines) under which it undertakes “counter-terrorism” operations in the country and provides the AFP with weapons and training. The US government has supplied the Duterte government with millions of dollars worth of Foreign Military Financing, with which the Philippine government purchases surplus war matériel from the US.

US-supplied weapons are being used by the Duterte regime in its war on drugs and in its war of suppression against the people, in both rural areas and cities. The war of suppression is especially dirty in the countryside where peasant villages are placed under military garrison. The peasant masses and minority people suffer intense trauma everytime US-supplied drones, helicopters and fighter planes hover, fly by and fire missiles or drop bombs.

4. The US imperialists aim to strengthen its command and control of the AFP as it gears for heightened economic, geopolitical and military conflict with rival power China. The US wants to use its military agreements with the Philippines to allow US forces use of Philippine facilities to service its fighter jets and warships and to direct the AFP’s counterinsurgency campaign in line with US military doctrine and interests. The AFP has long been under US tutelage with most of its officers trained along the lines of Pax Americana and US military doctrine.

5. However, some military officers have emerged in the AFP echelon who are keen to the idea that it is more beneficial for the AFP to align itself with China which is projected to surpass the US power in a few years. Or that it is best not to openly align with either imperialist power until the balance of power between the two giants become clearly in favor of one side. The decision of the Philippine defense establishment to sit out in the US-led multinational military exercises in the South China Sea near disputed areas was likely made in consideration of the view of some senior officers, that while the Philippine military maintains “strategic alliance” with the US, it must not openly antagonize China.

6. We urge the American people to call out the Biden government for aligning itself with the Duterte tyrannical regime. It is the right of the American public to demand to know how US-supplied weapons are being used against the Filipino people to serve the Duterte regime’s efforts to silence all critics and opposition and to strengthen its dictatorial hold on to power.

7. The Filipino people must reiterate their patriotic demand for the abrogation of the Mutual Defense Treaty (MDT), the Visiting Forces Agreement (VFA), the Enhanced Defense Cooperation Agreement (EDCA) and all other unequal military agreements between the US and the Philippines, which gives US military forces extraterritorial powers and turns the Philippines into a large US military outpost and springboard for interventionism in the Asia-Pacific region.

At the same time, they must strengthen their international solidarity ties, especially with the American people, in order to help expose the true conditions in the Philippines, particularly, how US-supplied weapons are being used in the dirty war against the people.