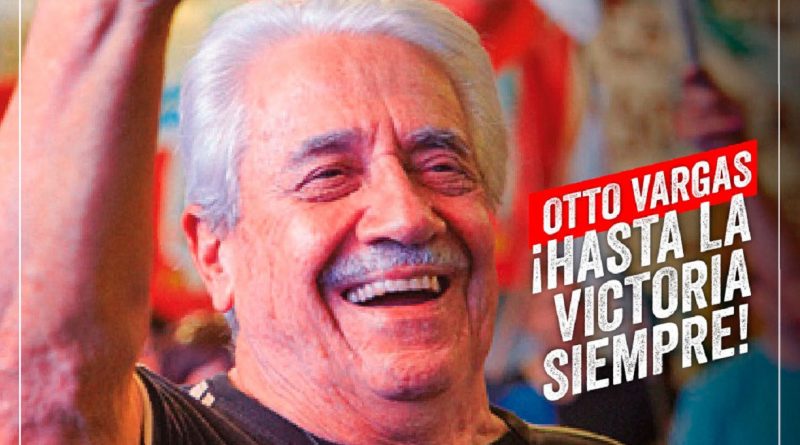 We join you in honoring your founder and leader who headed the foundation and construction of your Party. At the early age of 19, he was already a leader in the Communist Youth Federation. He participated in International Youth Festivals in Berlin, Budapest, Warsaw and Moscow.

In 1958 he went to Cuba and helped the Cuban revolutionary forces led by Fidel Castro. Later in 1960, he was part of the presidency of the First Latin American Youth Congress held in Havana and inaugurated by Che Guevara.

During the crisis years under the dictatorship of General Videla, Comrade Otto Vargas firmly opposed the dictatorship. He gave the advice to the mothers of the disappeared victims to hold a moving demonstration in Plaza de Mayo in front of the Presidential Palace. With the photos of their sons and daughters, forcibly disappeared by the dictatorship, the Madres de la Plaza de Mayo demonstrated regularly. They became a symbol of resistance and defiance. They became an inspiration to other resistance fighters throughout the world.

Comrade Otto Vargas saw the importance and necessity that the working class, together with the peasantry, be the foundation of unity in the people’s struggle for liberation. He never separated himself from the exploited and oppressed.

We  have fond memories of Comrade Otto Vargas in meetings with him in the International Conference of Marxixt-Leninist Parties and Organizations and the International Seminar on Mao Zedong Thought. He was a staunch advocate of proletarian internationalism and at the same time the equality and independence of parties.

We cherish most his visit to the International Office of the NDFP in Utrecht, The Netherlands. He spent a few days with us. We recall the sharing and rich discussions he had with Comrade Jose Maria Sison, the Founding Chairman of the Communist Party of the Philippines and other comrades. We also deeply value the warm reception he gave to our comrades who visited Argentina for international gatherings on women’s issues and other matters.

We render the highest honors to Comrade Otto Vargas! We wish his comrades in the Revolutionary Communst Party of Argentina, and the workers, peasants and others among the masses he loved and served, much strength. May he inspire you to greater revolutionary courage!