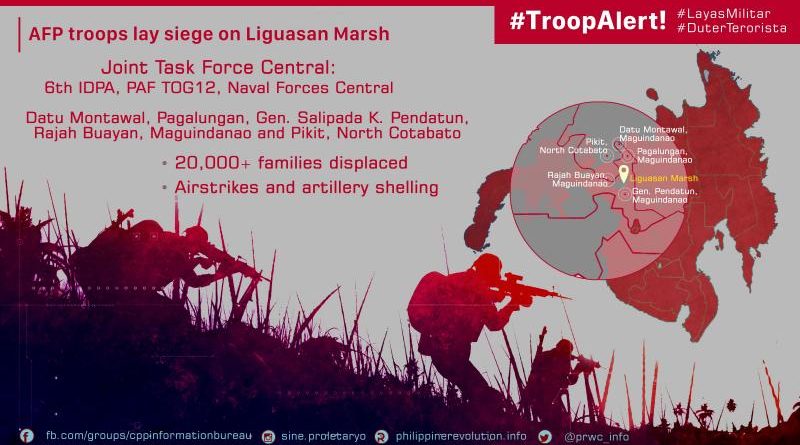 The Communist Party of the Philippines (CPP) strongly condemns the Duterte regime and the Armed Forces of the Philippines’ (AFP) all-out war which targets the Moro civilian population living in areas surrounding the 220,000-hectare Liguasan Marsh, in a brazen attempt to force the hand of the Moro people to accept the ignominies of Duterte’s Bangsamoro Basic Law (BBL), cripple the Moro people’s resistance, and at same time occupy and control the area’s vast natural resources.

Under the guise of running after so-called terrorists, the AFP has mounted relentless large-scale offensives and aerial bombardments in wide areas around the Liguasan Marsh.

Hiding under the thin veneer of eradicating terrorism, Duterte’s armed forces have literally occupied the towns along Liguasan Marsh, gravely disrupting the life and livelihood of thousands of families. The AFP reports its massive ground operations and air strikes killed about 25 BIFF fighters and destroyed a bomb factory, a claim the BIFF denies. Such operations have caused tremendous hardships on the Moro population, displacing at least 20,000 individuals from the affected areas which include the towns of Pagalungan, Datu Montawal, Raja Buayan, and SK Pendatun in Maguindanao, and Pikit in North Cotabato.

With Mindanao under martial law, the AFP applies unemcumbered the US-directed Marawi tactics of laying siege on entire civilian communities using overwhelming firepower and large number of forces, thereby rapidly establishing military power over the Bangsamoro area and control of the vast marshland.

The Duterte regime connives with many foreign investors who have already expressed intent not only in exploring the natural gas reserves, but also in building vast plantations in the marshland. In 2013, Malaysian businessmen have already expressed willingness to invest $575 million to cultivate 66,000 hectares of Liguasan into an oil palm plantation.

Duterte’s standing order to pass his version of the BBL is intrinsically connected with these so-called economic opportunities. An essential part of the BBL includes the controversial wealth-sharing provisions which opens up the Bangsamoro resources to foreign plunder and puts the Moro people at a great disadvantage. The use of pervasive and excessive force directly seeks to force the Moro people to surrender to Duterte’s BBL.

The CPP and all revolutionary forces of the Filipino people are in complete solidarity with the Moro people in their aspiration and struggle for their right to self-determination and defense against the brutal Duterte regime. We fully support the Moro people’s determination to persevere and intensify their fight by sustaining both unarmed and armed resistance against the regime’s manic attempts to oppress and exploit their people and resources. The Filipino and Moro peoples stand united against this unprecedented catastrophe called the Duterte regime and its war to lay waste on the Bangsamoro.