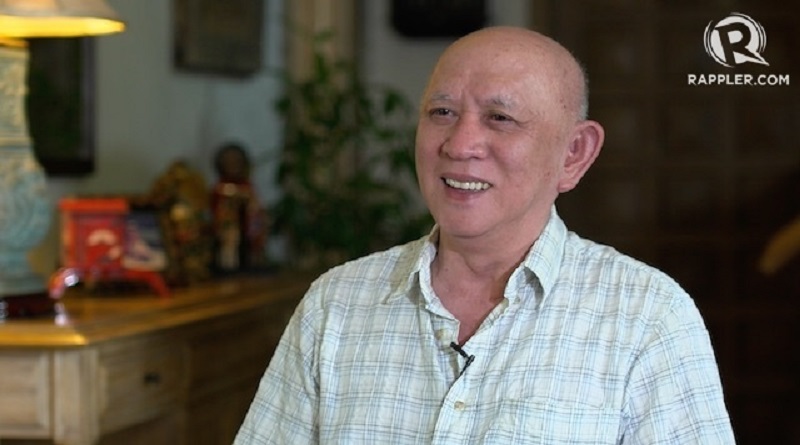 The 3rd round of talks between the Philippine government and the National Democratic Front, to be held in Rome from January 18 to 25, will be critical

MANILA, Philippines – The 5-month-old ceasefire between the Philippine military and the New People’s Army (NPA) is in danger of collapse as communist rebels protest delays in the release of over 400 political prisoners and alleged military advances in areas they claim to occupy.

Fidel Agcaoili, chief negotiator of the communist National Democratic Front of the Philippines (NDF), said the 3rd round of talks to be held in Rome from January 18 to 25 will be “critical.”

The government has previously committed to address the two sore points affecting the talks.

“Malaki. Malaki ang danger na mabe-break ‘yan kasi nga hindi mo mapipigilan (There is a big danger that will break [the ceasefire] because it can’t be helped anymore),” Agcaoili said in a no-holds-barred interview on Rappler Talk. (WATCH: Rappler Talk: Fragile talks with the Philippine left)

If the issues are not addressed, Agcaoili is looking at a scenario where there still will be negotiations as fighting resumes on the ground. “Talk while fighting. That could really happen,” Agcaoili said, citing similar arrangements during past administrations.

In a separate interview on Thursday, January 12, Defense Secretary Delfin Lorenzana said the chance of the ceasefire holding is “50-50.”

While the military supports the peace process and hopes to sign a joint ceasefire deal, Lorenzana said the military is ready to go back to war if the negotiation fails due to what he referred to as difficult demands coming from the communist rebels. He did not elaborate.

“It’s 50-50. Kasi marami silang hinihingi na ayaw ibigay ni presidente (They have difficult demands that the president is not willing to give),” Lorenzana told Rappler.

A broken ceasefire should not stop the talks, he said.

“We can continue talking whether there is a ceasefire or there is no ceasefire. We challenge him. Kung walang (If there is no) ceasefire, hindi ba puwedeng mag-usap(can’t we talk)? Kung talagang (If indeed) you are for reforms,welcome mo ‘yan, di ba(it, right)? Reporma naman ang ating pinag-uusapan (We are talking about reforms here). At saka ikaw naman (Besides) you said, ‘Change is coming’,”Agcaoili said.

The NDF aims to complete talks on socio-economic – focusing on agrarian reform and national industrialization – and political and constitutional reforms.

The successful first round of talks in Norway in August 2016 resulted in the declaration of separate unilateral ceasefires by the military and the New People’s Army. The government committed to recommend the amnesty of political prisoners while the NDF agreed to sign a bilateral ceasefire agreement that will guarantee a prolonged ceasefire.

The process of granting amnesty to political prisoners is taking time, however, because it requires Congress approval. No new timeline was set for the signing of a bilateral ceasefire deal – one that will put in place common rules for the military and the NPA to follow to avoid misencounters on the ground – that they originally wanted to be in place by October 2016.

In August, the government released 22 detained NDF consultants to join the talks, including tagged high-ranking leaders of the New People’s Army. Among them was Benito Tiamzon, who was appointed as the newest member of the NDF negotiating panel. In December, 4 convicted NPA rebels were granted pardon.

The government is working out the release of over 100 more political prisoners, but President Rodrigo Duterte said he will only allow it if the NDF signs a bilateral ceasefire agreement that is meant to guarantee the continuation of the ceasefire. (READ: Duterte sets condition for freeing 130 political prisoners)

The communist rebels are accusing the military of taking advantage of the ceasefire by conducting military operations in areas the rebels claim to occupy. The military denied this and some officers, who refused to be quoted because they are not authorized to speak on the matter, are accusing the NPA of the same violations.

Agcaoili said the NPA combatants are avoiding the military to protect the ceasefire but the situation is becoming “untenable” because troops, he said, are occupying schools, day care centers, public plazas, and even bus stops.

For 2017, the military announced a new campaign plan – Development Support and Security Plan (DSSP) Kapayapaan or DSSP Kapayapaan – that adjusts its military operations to support the peace initiatives under the Duterte administration. (READ: AFP chief: Reds should work with military in new campaign plan)

Agcaoili said they welcome commitments that the new campaign plan will uphold the peace talks, but they have yet to see the document. “Hindi pa namin nababasa (We haven’t read it yet). We’ve heard about so-called enhanced Oplan Bayanihan but only from paper,” he said.