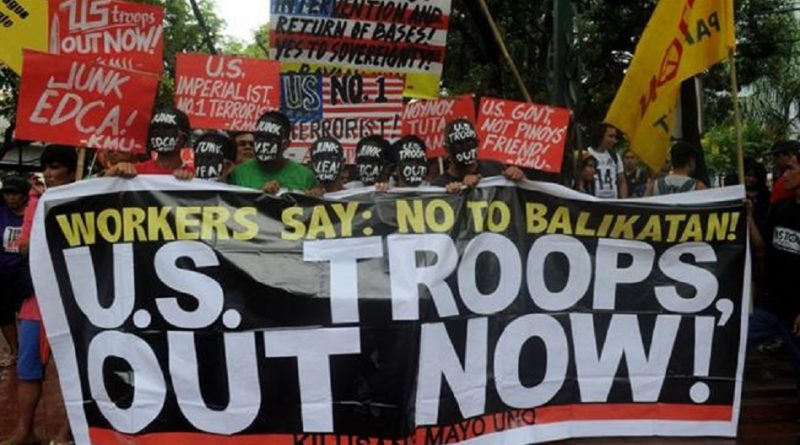 The Communist Party of the Philippines (CPP) today welcomes the pronouncement yesterday of GRP President Duterte saying US special forces operating in Mindanao will “have to go.” The CPP says Duterte’s pronoucement comes at a most propitious time as the Filipino people are set to mark on Friday the 25th anniversary of the end of the Military Bases Agreement. The Filipino people must stand united and declare “Yankees, go home!”

The CPP calls on the Duterte regime to follow-through the declaration with actual political and diplomatic measures to effect the removal of US troops.

In line with his government’s declaration of pursuing an independent foreign policy, the CPP urges the Duterte government to pursue the removal of all US troops not only in Mindanao. There are US special forces, army and naval troops operating across the entire country.

Under the Enhanced Defense Cooperation Agreement (EDCA) of 2014, the US military has set up or is setting-up facilities inside AFP camps such as Fort Magsaysay in Nueva Ecija, Basa Air Base in Pampanga, Antonio Bautista Air Base in Palawan, Benito Ebuen Air Base in Mactan and Lumbia Airport in Cagayan de Oro.

US military troops and advisers have long been operating clandestinely inside AFP camps in Cagayan Valley, Bicol, Samar, Panay, Negros and elsewhere. US troops remain stationed in Guian, Samar, which they have not left since 2013 after extending “assistance” in the wake of supertyphoon Yolanda. Many US soldiers are not Caucasian so as not to attract attention.

There are also so-called “rotating troops” around the country including inside Clark Air Base, Subic Naval Base and Villamor Air Base. Thousands of US troops regularly dock at various ports of the country for “rest and recreation” subjecting Filipino women to rape and abuse.

There are US military personnel inside the AFP’s Camp Aguinaldo as well as FBI and NYPD agents inside the PNP’s Camp Crame. In a display of gross lack of national dignity, the AFP has allowed the US military to maintain an exclusive compound inside its main headquarters which is off-limits even to the top generals of the AFP. The US government has kept convicted US Navy serviceman
Joseph Scott Pemberton detained inside an American facility in Camp Aguinaldo in a flagrant violation and contempt of Philippine laws.

The Duterte government must stand against the US military flying surveillance drones and dropping so-called “smart bombs”. Duterte must demand clear information to the February 2, 2012 incident where scores of civilians, including a religious leader, were killed by a US a “smart bomb” dropped in Parang, Sulu, where the AFP first announced the “neutralization” of so-called terrorist Marwan.

The GRP President must also investigate and demand a clear and complete accounting of all clandestine operations carried out in Sulu, the rest of Mindanao as well as other parts of the country.

GRP President Duterte can only establish mutual relations with the US as well as with China and other countries by establishing the Philippines as an independent and non-aligned country. To do so, he must end all agreements which bind the Philippines to the US and make the country a vassal of the US military. He must abrogate the Mutual Defense Treaty of 1951, the Mutual Logistics Service Agreement (MLSA), the 1998 Visiting Forces Agreement (VFA) and the EDCA.

Only then can the Philippines stand on solid ground to demand equality and respect.