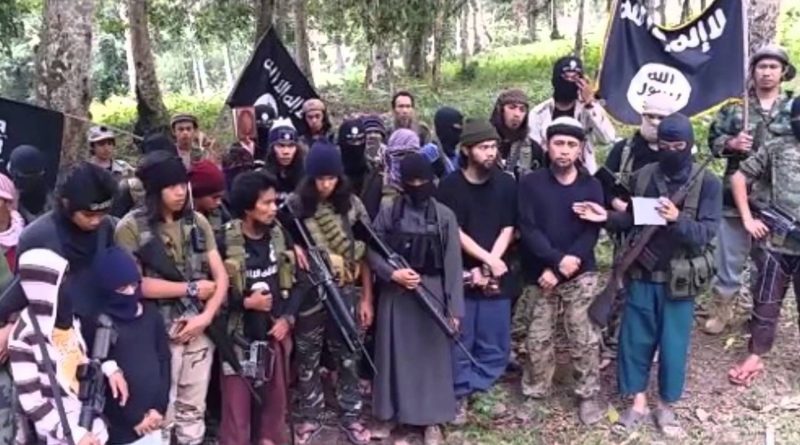 Communist Party of the Philippines
14 April 2017

The news stories regarding the supposed arrival and presence of members of the Abu Sayaff criminal bandit group in Bohol island smacks of a US yarn. The Filipino people find most of the press statements released by the military, police and local government officials as highly suspect.

According to information churned out by the Armed Forces of the Philippines (AFP) and Philippine National Police (PNP), military and police forces were deployed last April 11 to Inabangan town, Bohol, and encountered members of the Abu Sayaff resulting in the killing of three Army soldiers, one police personnel and five bandits.

Two among the so-called bandits killed by the military was a 65-year old couple identified by barangay officials as Constancio and Crisente Petalco who were residents of Barangay Napo, where the clash occured. The Philippine Air Force dropped nine bombs in Barangays Napo, Calenti and Banahao in Inabangan forcing at least 1,200 local residents people to evacuate.

The CPP joins the Filipino people in condemning the overkill military operations conducted by the AFP in Inabangan town which have endangered the lives of civilians.

The AFP media office, known for spinning fake news stories, has produced a highly dubious story of no less than 60 fully armed men who travelled three hundred kilometers by boat from Sulu to Bohol, unhampered by the whole AFP establishment, then upstream to a place unknown to them with only a general plan to “target tourists.”

This story is a typical of the tall tales spun by the US Central Intelligence Agency and their conspirators within the Philippine defense and security establishment.

Making the story even more suspect is the fact that three days prior to the encounter, the US embassy in Manila released a travel advisory warning their citizens against travelling to Cebu and Bohol because of supposed information of a “terror threat” in these places, which the AFP and PNP had no idea of.

The operators of the Abu Sayaff criminal bandit group have long been collaborating with the AFP and the US military. Recall that the Abu Sayaff was originally formed in the 1980s by a group of armed men recruited by the US military to join the Taliban group which waged a CIA-hatched “jihad” against the then Soviet-supported Afghanistan government.

The Abu Sayaff has since been used by the US and AFP as a multi-tool to discredit the Moro people’s struggle for self-determination. It has been used to carry out terrorist bombings and other dirty jobs for the CIA to justify its “war on terror” and the presence of US foreign troops in the country. Its bandit activities, mainly kidnapping-for-ransom, has been lucrative for the Abu Sayaff ringleaders and their AFP handlers.

The tall tale of the presence of the Abu Sayaff in Bohol likely forms part of a US plot to strengthen its foothold and increase the presence of its troops in the Central Visayas region. It broke out just a week prior to the ASEAN ministerial meeting scheduled for later this month Cebu. It is no secret that the US military has long been eyeing to establish facilities in the Mactan air field.

The US military also aims to establish itself more firmly in the Eastern Visayas region having established US facilities in Guian, Samar under the guise of post-Yolanda rescue operations. The annual Balikatan exercises are set to be carried out starting April 24 in Leyte, just north of Bohol.

The full extent of the plans surrounding the “Abu Sayaff in Bohol” yarn will likely unravel itself in the coming days and weeks. The Filipino people should keep a critical eye and spot the fakery in all these.