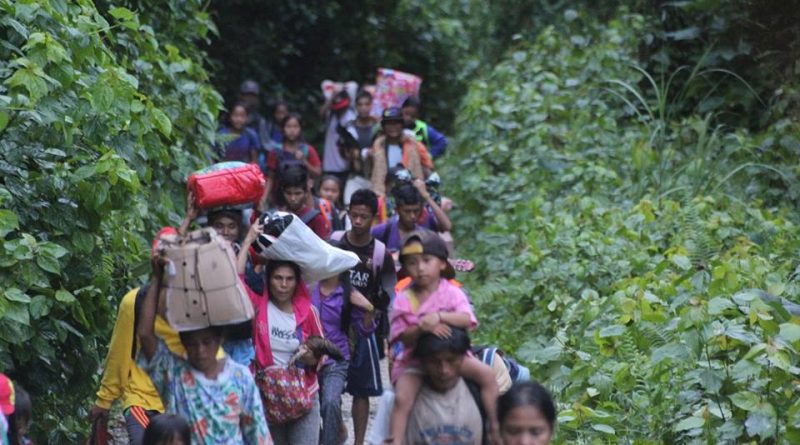 The New People’s Army – North Central Mindanao Region (NPA-NCMR) condemns the US-Rodrigo Duterte regime for deploying a new battalion of the Armed Forces of the Philippines (AFP) in Southern Bukidnon this month.

It had been only two weeks since the 88th Infantry Battalion reached the old camp of the 8th IB in Maramag, Bukidnon, militarization had already intensified against the people and the revolutionary forces of the said area.

Despite with the vast plantations for ready-to-export products, of foreign corporate farmlands in the province, their expansion did not cease which will even ravage the agricultural lands. From here, infrastructure projects are setting down to build the Pulangui Dam–V and Maramag-Don Carlos Airport that will invite more foreign investments to the province, as anticipated by the bureaucrat capitalists.

According to reports, the Pulangi Dam-V will aggregate the rivers in Bukidnon and Cotabato and will clear the 40,000 hectares of forest, agricultural and ancestral lands in 22 barrios in the provinces of Bukidnon, Maguindanao and North Cotabato. 2,800 families of Matigsalog tribe in Kitaotao, Bukidnon and Tagabawas tribe in Cotabato will be affected of possible flooding of the said dam. More or less 6,700 families will also be affected with their livelihood, such as farming, fishing and small-scale mining of gold in the river. Overall, more than 800,000 residents from Maramag, Bukidnon, Moro communities in Liguasan Marsh and in Cotabato City, Maguindanao will be affected with this project, who are principally depend on the water from Pulangui river for their irrigation, fishing and other livelihood.

The Maramag-Don Carlos Airport will also convert hundreds of hectares of farmland as airfield. Despite of the fact that the province and region already experienced several calamities, such as floods, landslides and forest fires, Del Monte, Dole-Itochu, Sumifru, Davco and A. Brown did not cease of devastating even those declared by the Department of Environment and Natural resources (DENR) as watersheds and protected areas.

Hence, the current situation is very timely for the imposition of martial law in Mindanao and intensive offensives against the revolutionary movement and the armed resistance of the Moro, so they could lay more of their AFP troops and Lumad bandit groups in the ancestral lands. Hence, it is even more blatant that the mandate of the 88th IB, under the leadership of Lt. Col. Allan Ortal, is to defend the interest of the companies who were drooling to plunder the lands. In a time or two, we could anticipate the aggravating militarization, violation of people’s rights of the peasants and of the right to self-determination of the Lumad.

It has been more blatant to the people that the US-Duterte regime’s plot was just to hasten the establishment of pro-imperialist infrastructures through his “Build, Build, Build,” in order to submit the resources and labor forces of the country to his bosses such as the US, China and other superior foreign countries. Military oppression aims nothing, but to exploit the life of the toiling masses.

As response to this, armed and unarmed resistance will surely reciprocate the said objective of the 4th Infantry Division. The NPA-NCMR is in its favorable political and moral position to put the armed aggression of the said battalion into complete failure, may it be anywhere in the province or anytime they want to.

The encroachment of these giant foreign companies will intensify the resistance that the people of Bukidnon have been waging. They grasped with them the heroic and militant tradition of resisting and persevering for more than four decades, even before late President Marcos imposed martial law on 1972. The 88th IB and the AFP organization as a whole should always remember that the NPA strengthen, expanded and became triumphant within the 48 years of its being because of the fascist and repressive system that had been the oppressed and exploited masses’ daily meal.