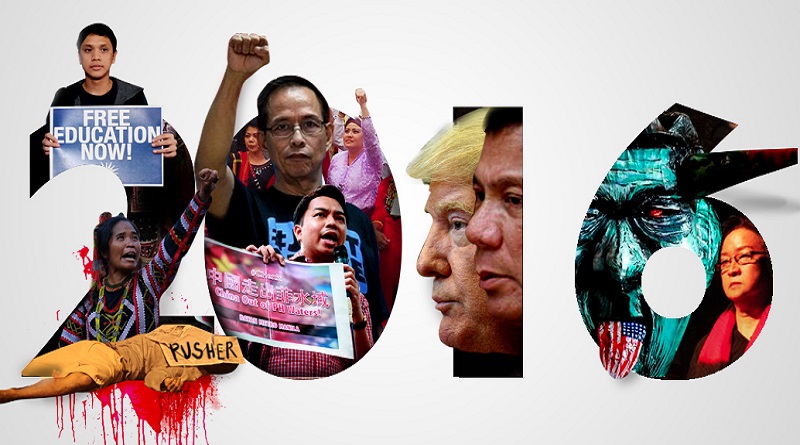 Here are the top people’s issues and people’s struggles of 2016.

The defeat of the Liberal Party’s presidential candidate reflected the seething rage of the people toward the corrupt, inept and callous regime of Daang Matuwid. President Noynoy Aquino started his term in 2010 with a popular mandate but he squandered his legacy when his government expanded the presidential pork, boosted Public-Private-Partnerships to the detriment of ordinary consumers, bungled the post-Yolanda rehabilitation program, and intensified the militarization in mining and plantation areas. Not surprisingly, Aquino’s anointed successor was overwhelmingly rejected by voters.

He was the last to announce his bid for the presidency and he initially lacked a national political machinery to support his candidacy but Duterte’s non-traditional ways of campaigning endeared him to the public. His phenomenal victory was historic: the first Mindanaon president and the first ‘Leftist’ to occupy the Malacanang Palace. Duterte was seen by many as an outsider who can lead the masses in challenging the Establishment. His victory was a ‘protest vote’ against the oppressive and anti-poor political system.

The prolonged dry season caused by El Niño has exacerbated incidences of hunger, poverty, and deprivation in the countryside. Farmers and other food producers in Mindanao were seeking the urgent release of calamity funds but their desperate pleading was dismissed by bureaucratic gobbledygook and state brutality. The Philippines is vulnerable to the harsh impact of climate change but the situation is made worse by extreme poverty and inequality, bad governance, and environment plunder. Meanwhile, tropical storms wrought havoc in the Bicol region during the last quarter of the year.

Despite the obvious unpreparedness of the education department, the senior high school (SHS) component of K-12 (it should have been named ‘TESDA in High School’) was implemented last June. The number of drop-outs was high even if this was denied by authorities, learning modules were inadequate or inaccurate, and many college teachers in private schools lost their jobs. But the corporate sector found K-12 as a lucrative potential, with tuition in SHS as high or double the rates in college. In addition, the K-12 curriculum directly promotes the labor export policy which would negatively affect the country’s human capital in the succeeding years.

China’s bully behavior in the West Philippine Sea was officially recorded in the proceedings of The Permanent Court of Arbitration. The legal victory of the Philippines is part of the continuing struggle of the Filipino people to assert our sovereignty in our lands and territorial waters. Duterte eventually adopted a different strategy in dealing with China but it should not invalidate or undermine the historic significance of the PCA ruling.

Duterte’s ambitious promise to get rid of the drug menace in six months has emboldened the police to launch an aggressive anti-drug campaign. The police claimed that they killed 2,206 drug personalities but they also acknowledged that there were 4,049 victims of vigilante-style killings. More than a million people have already surrendered to authorities but drug-related extrajudicial killings continue to victimize mainly the poor and powerless. Duterte was initially right to run after the big time protectors of drug lords but the campaign soon relapsed into a killing frenzy in urban poor communities and political circus performed by traditional politicians. The ‘War on Drugs’ is bound to fail if the militarist approach will remain dominant instead of addressing the socio-economic needs of the people.

Duterte’s decision to resume the stalled peace negotiations between the government and communist rebels has raised the prospects of achieving just and lasting peace in Philippine society. Duterte endorsed the release of communist leaders and affirmed his support for the previously signed peace documents. The rebels, on the other hand, reciprocated by declaring a unilateral ceasefire. But the earlier optimism to expedite the peace talks has been replaced by less enthusiasm because of the continuing deployment of government troops in rebel-controlled villages, the non-release of political prisoners (especially the sick and elderly), and the impasse on the framework of the socio-economic reforms.

There were moments in 2016 when some aspects of neoliberalism became part of mainstream political agenda. During the campaign period, presidential candidates were unanimous in criticizing the dehumanizing features of the contractualization (Endo) labor practice. When he assumed the presidency, Duterte reaffirmed his commitment to end Endo. Duterte also vowed to dismantle the reign of oligarchs. But Duterte’s economic advisers turned out to be fanatical followers of neoliberalism as they espoused the continuation of PPP, the adoption of a win-win formula (read: pro-business) on contractualization, the planned imposition of higher regressive taxes, and the refusal to hike pension and minimum wages. Duterte’s support base among the poor will weaken if his macroeconomic policies will continue to be biased in favor of the elite and big foreign business.

The biggest rally of the year was triggered by Duterte’s collaboration with the Marcoses to bury the former dictator Ferdinand Marcos at the Libingan ng mga Bayani. The real aim of the Marcoses is to revise the judgment of history which would allow them to return to power in the future. Duterte underestimated public protests and the emergence of the millennials as an influential voice opposing the hero’s burial for the deposed dictator.

The most inspiring political moment of 2016 was the grand assembly of various ethnic groups from all over the country which led to the formation of Sandugo, a national alliance espousing the protection of the cultural heritage of indigenous peoples and their right to self-determination. Sandugo is the new icon of indigenous peoples, a united community resisting foreign aggression and state-sponsored violence. Sandugo eschews the exotic stereotype of national minorities, and instead highlights the struggle of their people in defense of their ancestral domain and culture.

His victory confounded and disturbed many people especially immigrants, people of color, and the LGBT community. A conservative leader accused of promoting racist and misogynist views. Despite his image as a corporate tycoon, he was able to gather the support of ordinary voters who felt that the system is not working for them. What will happen once Trump becomes President Trump this month? How will a Trump presidency maintain American hegemony in world affairs? Will he openly support the alleged plot to oust Duterte? Will he deport migrants and foreigners from the US, 3.4M of them Filipinos, and expose the insolvency of the American dream?

A peasant leader overseeing the government’s land distribution program? Unthinkable in the past, but thanks to Duterte’s unprecedented invitation to the Left to work with his government, we now have prominent progressives in the Cabinet. This is also an opportunity for the Left to prove their new brand of leadership and demonstrate their sincerity to fight for the rights and welfare of ordinary Filipinos, whether they are marching in the streets or making laws in Congress, and now implementing policies in the executive branch.

Duterte, like no other President the country ever had, hit back at comments and criticisms of the US of how the Philippines is being ran by deploring US in its crimes to the country and the people when we were its direct colony. This sparked spats of nationalism and finally openly addressed continuing US domination and spurred interest in what could be an independent foreign policy. There should be no debate about this issue because it is a basic principle of governance. But after decades of colonial indoctrination, many intellectuals are fearful and doubtful about asserting this principle. Some are even distorting the concept by describing it as a mere anti-American policy or a pro-China initiative. Duterte’s stance to assert the Filipino interest vis-a-vis global superpowers is admirable but it must be matched by concrete actions like the abrogation of unequal military treaties and economic agreements.

Duterte’s human rights record is an international embarrassment. The culture of impunity with respect to state-sponsored killings has worsened under his term. Aside from the drug-related killings mentioned earlier, political killings of activists, journalists, and Lumad leaders did not end under the Duterte presidency. The military is even using the anti-drug campaign to justify the harassment of peasant leaders suspected of supporting rebel groups. There are still more than 400 political prisoners in the country. Duterte’s legislative priorities such as the restoration of death penalty and the lowering of minimum age of criminal responsibility also threaten to undermine the rights of people.

People cried out to fake news in social media at the time of the US elections, but in the Philippines it has become a concern a bit earlier, most alarmingly also during the the May elections. Fake news is a global dilemma that also affected the country’s political landscape. Various political groups compete for social media attention by maximizing or exploiting the Internet. Some of their loyal supporters are even spreading misinformation and other irresponsible propaganda tactics just to tilt public opinion in their favor. Corporate-led propaganda continues to be dominant, vicious, and slanted as ever but 2016 was the year when online fake news succeeded in influencing the political discourse in a massive way.

Is it really free? Is it really for all? The details of this landmark policy will continue to be debated this year. Stakeholders are not yet finished in determining the applicability of this policy in schools across the country. But a big obstacle was breached in the fight for a free tertiary education. Lawmakers and education officials, reared in the neoliberal school of thought which disavows the giving away of subsidies, have finally articulated the relevance of providing free tuition to college students