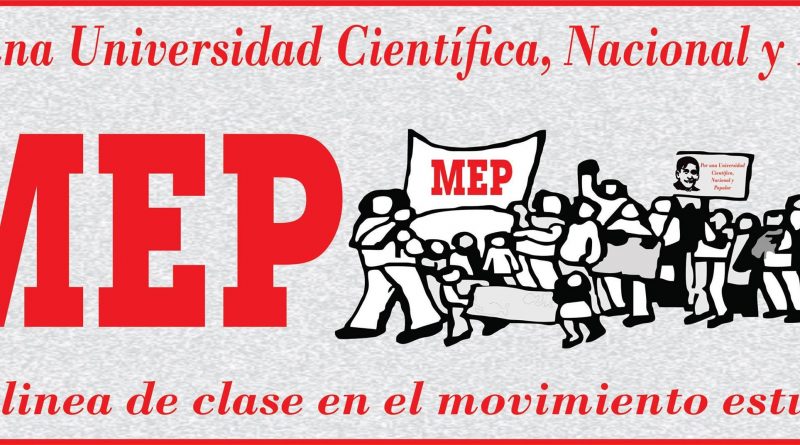 THE POPULAR STUDENT MOVEMENT (MEP) firmly assuming the steely principles of the class line in the student and popular movement, we express our fervent greetings to the students and our beloved people, stating the following:

The MEP as a class organization seeks to develop a just and correct strategy to unify the student movement. Its tactic is to develop bases in universities, colleges and schools under the just and correct ideology of Marxism-Leninism-Maoism (MLM). The work is already being carried out and should increase from now on. For this reason, the MEP seeks to become the vanguard of the student movement, struggling undeterred to concretize the unification of the national student movement under a class line, as part of the national unification of students seeks to RECONSTITUTE the Student Federation of Peru to propose it at the service of the students and the people and with this, contribute to the liberation of our people that will take place in the middle of a prolonged struggle process.

In the same way, with the development of the class line within the student movement, we are giving a hard blow to imperialism, to bureaucratic capitalism and semi-feudality, which are the three mountains that oppress our people. As an expression of the class struggle within the student movement, there are two paths, the path that is bureaucratic, reactionary and in service of imperialism, and the democratic path, the path of the people who seek their liberation. For this reason, as students who uphold classism, as part of the democratic path, and as intellectuals in formation, the finished product of our intellect cannot be other than to develop a culture at the service of the class: the proletariat. For this reason, as students following the classist line, we must uphold, defend and apply the slogan “For a scientific, national and popular university!”

Now let’s see how the world is: the current moment we live in is the final stage of capitalism, imperialism, which the MEP certainly characterized in the I STUDENTS CONFERENCE as “monopolist, parasitic and agonizing”. This is a period where the world proletariat, with its ideology, MLM, finally bury imperialism. We live in important historical moments that demand of each one of us a correct performance and not only that, but also to unite all the oppressed of the world to give the final fight against the common enemy that is imperialism. To that task the MEP seeks to contribute with their struggles and with the unification of the student movement. Therefore, it is necessary to fight against the imperialist plans in all parts of the world and to see it as sworn enemy of humanity.

With respect to our concrete reality, we say that we are a semi-feudal and semi-colonial society where bureaucratic capitalism has established itself, as Mariátegui and the developers of his thought accurately defined; There are other definitions that are presented to us, to cover up their betrayals and hinder the way of the liberation of the Peruvian people, they say that we are a society that is “colonial, semi-colonial and semi-feudal”… This basically reflects more right opportunism and seeks to justify its incorporation in the old state joining with local officials and other reactionaries. Another says that we are “dependent capitalist with semi-feudal backward consciousness”, which is nothing but another expression of right opportunism that seeks ultimately to give viability to the path of parliamentary cretinism. Therefore, without clarity of what we are as a society, we cannot have a correct social praxis.

Let’s analyze the Vizcarra government as it unfolds since it took power. We see that it is more of the same repression, continuator of the imperialist, principally Yankee imperialist, plans. It has demonstrated itself in the violent response it gave in the “march against corruption”, July 27, 2018, with tear gas bombs, firecrackers, rochabus (vehicles to dispel protests), even the arrest of children of the people; his call to “referendum” is only to settle his struggles, differences of nuances but not of substance, with the comprador faction represented by aprofujimorismo and in the midst of the despicable opportunism which leads the people to the tail of Vizcarra; see his performance in the mining problem, as he responded to the just demands of the peasant masses in defense of their lands, perhaps has not responded with a harsh repression seeking to evict the local population with blood and fire; at the end of the year 2018, Supreme Decree No. 345-2018-EF has been approved, which proposes the cutting of labor rights and, in the face of the just protest of the masses, on January 15, 2019, it has responded with fierce repression, leaving the balance several detainees and a student shot with pellets in his leg and in universities it continued its policy of repressing the just student protest and defend the university law No. 30220 which Vizcarra said “he would promote” or, in fact, generate greater violation of rights and continuation of the privatization of public and free education.

The road we are seeing is aligned with the plans of imperialism signed in the Washington consensus. That is the face of Vizcarra in deeds towards the popular masses: one cannot to be carried away by the discourse, but by the facts.

This is how the MEP, analyzing the concrete reality that we are living, proposes to unify the advanced, democratic and progressive students to combat the private plans that surround the university by developing a powerful national student front for the DEFENSE OF THE PUBLIC AND FREE UNIVERSITY EDUCATION, task that The Student Federation of Peru (FEP) should comply, but being co-opted for the opportunism of Patria Roja, didn’t fulfill. Therefore, it is necessary to fight to RECONSTITUTE the FEP and put it at the service of the students and the people. At the same time, it is necessary to fight against the twin brother of Patria Roja, the MOVADEF, who camouflages itself with classist language to lead the students to the path of parliamentary cretinism. It is vital to understand this.

In order to meet these objectives, the MEP considers the UNIFICATION of students and the RECONSTITUTION of the FEP necessary; for this, we propose to start by analyzing the following points:

The MEP predicts that student UNIFICATION will take place, putting us one step ahead of those opportunist and revisionist forces that only see in the student movement an opportunity to reach a seat, a position in the bureaucratic-feudal old state, which we reject and will mark that practice with fire.