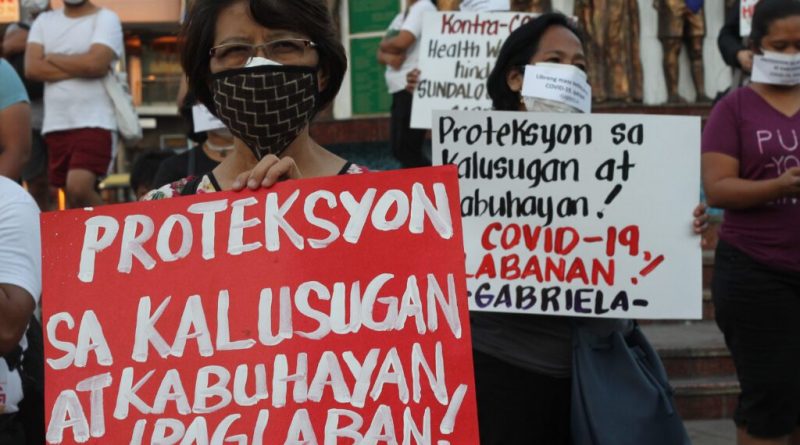 Close to three months of Duterte’s martial law lockdown and sheer incompetence in handling the Covid-19 pandemic has been devastating to the Filipino people. It has been doubly so for women and girls. Women, especially working women, have borne the brunt of the lockdown.

Women are at the forefront of the battle against Covid-19.

Up to 80% of Filipino nurses are women, many of them infected and in quarantine due to lack of proper protective gear. Scores have died due to the infection. They suffer through 12-hour rotations amid personnel shortages. Many forego going home for fear of infecting their children and families as they are not regularly tested. Over the past months, they were subjected to military and police checkpoints and transport restrictions. On top of all of this, they receive 22% less in salaries compared to their male counterparts.

Majority of working women have been left with no income and have been forced out of their jobs due to the lockdown. Teaching, sales, clerical work, food and accomodation, all predominantly female occupations, have suffered as schools, malls, offices, hotels and restaurants were shutdown for more than two months.

Some will reopen but with fewer workers, and others, like schools, will likely remain closed until Duterte deem it “safe” to open. Sectors which Duterte rushed to open, such as construction and mining, are overwhelmingly male.

More than half of informal workers are women. They work in enterprises that are most affected by the lockdown such as sari-sari stores, parlors, food stalls and small eateries. Last year, there were more women than men who applied for small enterprise licenses, most of which are probably bankrupt by now.

In poor communities, it has been the womenfolk who were forced to wait in line for hours on end to avail of Duterte’s stingy amelioration. In 2015, 4 million women, as opposed to 400,000 men, were considered “poorest of the poor” and were enrolled in the DSWD’s 4Ps program. They bear the burden of stretching meager aid and finding other sources of food for their families.

In rural areas, women suffered as agricultural production consistently and progressively lag behind family needs. More women are landless than men. Over the years, six in ten women have worked as unpaid family workers in agricultural businesses and farms. With no income, no savings, and no prospect of earning a living, the lockdown exponentially worsened their condition.

Travel restrictions and unemployment have contributed to the uncertainties of overseas women workers. Many of them work as domestic helpers, sales ladies and in other services, and have been dismissed in droves by their employers. They come home only to be subjected to prolonged detention in quarantine facilities. Among them are pregnant women who have been criminally neglected as Duterte’s government failed to provide fast and accurate testing and processing of their results.

Initial studies suggest that pregnant women have the same risk of getting Covid-19 as adults who are not pregnant. But pregnant women are immunocompromised and are generally considered vulnerable to similar respiratory illnesses. Under the lockdown, prenatal care have been overlooked as hospitals and community clinics were diverted towards emergency response.

As BHERTs (Barangay Health Emergency Response Teams) become preoccupied with community-wide quarantines, basic medical care provided to pregnant women dwindled to almost nothing. Breastfeeding mothers and their newborns are largely being neglected amid the overstretching of the weak public health system. With limited funds and resources, most new mothers have been forced to forego immunizations and well-baby consultations. The military lockdown has further worsened the sorry state of basic infant vaccinations against measles, diphteria and polio.

Under Duterte’s lockdown, a woman’s burden of cooking, cleaning, washing dishes, doing the laundry and market runs have doubled as gender inequalities in housework are believed to increase, not decrease, when men are unemployed. Between two working parents, it has been the mothers who gave up more professional duties to care for the children and elderly family members. When Duterte and his cabal of incompetent officials shift education to “homeschooling,” it will mostly be the women who will shoulder this added responsibility, regardless of their occupation.

Inside locked homes, women are left with no protection against domestic abuse and sexual violence. The United Nations already warned that strict lockdowns lasting six months could lead to 31 million additional cases of domestic abuse. Restrictions on mobility, coupled with the ban on public transportation, hamper battered women’s ability to seek help or escape their abusers.

Under Duterte’s misogynist rule, violence against women have been on the rise even before the lockdown. Police have recorded high rates for rape, up 31% from 2018 to 2019, and physical violence, up 15% in the same period. The DSWD meanwhile registered 55% increase in the number of sexually exploited women in the same period. Under the lockdown, reports have been trickling in about policemen soliciting sexual favors in exchange for travel passes and minors engaging in prostitution.

The list is endless on how the lockdown burdened women. They are bound to suffer the ramifications of state neglect and disruption, lost livelihoods and crumbling incomes in years to come.

The Party calls on the Filipino women to hold the Duterte regime accountable not only for its failure to manage the pandemic but also for the disproportionate impact of its lockdown on women’s livelihoods, health and welfare. More than ever, they have the right to call for his ouster.