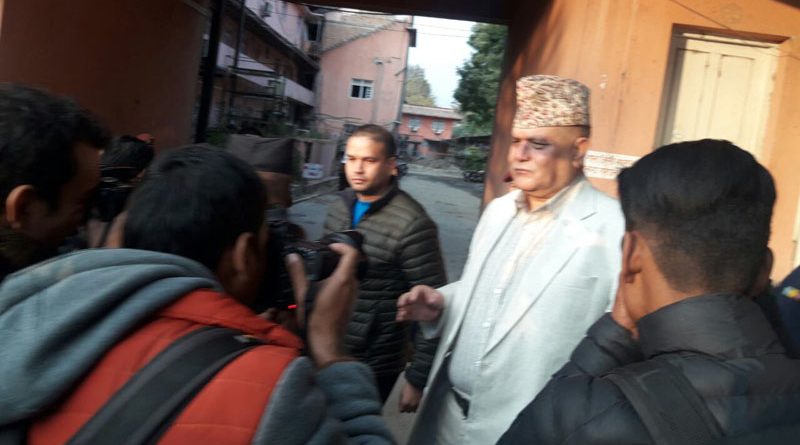 Dec 23, 2016- Two persons who smeared black soot on Lokman Singh Karki’s face on Thursday have been identified as Prakash Shahi of Dang and Chandra Bahadur Budha of Rukum.

Both are student leaders of the Netra Bikram Chand-led CPN Maoist.

Shahi and Budha were immediately held after they blackened Karki’s face on the premises of Supreme Court.

The CPN Maoist confirmed that the two involved in smearing black soon on the face of the suspended chief of the Commission for Investigation of Abuse of Authority are leaders affiliated with its All Nepal National Independent Students Union Revolutionary (ANNISU-R). Both Shahi and Budha are central committee members of the ANNISU-R.

Khadga Bahadur Biswokarma, spokesperson for the CPN Maoist, claimed that the party was seeking an opportunity to attack Karki—“the protector of corrupt—and that it was part of the party’s preplanned move. “All corrupt people are under our party’s scanner and they will face our music sooner rather than later,” said Bishwakarma. Both Shahi and Budha are in police custody.

Surendra Bhandari, one of the lawyers who argued against Karki on Thursday, said Karki is facing a court case and that any kind of physical assault is but anarchism. “No one should try to infringe upon the right to seek justice through due process, but if the incident has been orchestrated with a motive to delay the process, it will be an unfortunate incident,” said Bhandari.