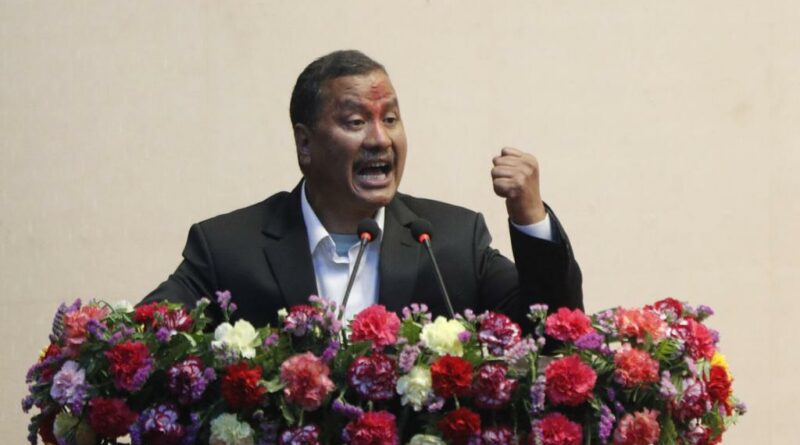 Kathmandu, March 5, 2021: Netra Bikram Chand, general secretary of the Communist Party of Nepal, who made his first public appearance in two years, said on Friday that he was committed to the three-point agreement reached between his party and the government.

The three-point agreement has it that the Communist Party of Nepal would seek to address all its political issues through dialogue and carry out all political activities in a peaceful manner, and the government, in return, would lift the ban imposed on the party’s activities and initiate the process to release the party’s cadres and withdraw cases against them.

During his speech, Chand tried to defend his political line that the existing political system is outdated and that it needs to be changed for which his party has been demanding a referendum so as to decide between the existing parliamentary system or scientific socialism.

“The people should be allowed to make a choice,” said Chand.

The Oli government had imposed a ban on the activities of the Communist Party of Nepal in March 2019 after two blasts in which one person had died.

Chand, once a loyal lieutenant of Pushpa Kamal Dahal who led the decade long People’s War war, had formed his Communist Party of Nepal, saying Dahal had left the People’s War halfway and that he wanted to complete it through a Unified People’s Revolution.

Chand and Thapa, the incumbent home minister who was also a key member of the Maoist party during the war, had parted ways with Dahal in 2012, six years after the historic peace deal.

But Chand and Thapa’s association did not last long as they differed on their political lines. Though Thapa was for launching a revolt on the basis of the People’s War, he returned to Dahal’s Maoist party in 2016.

In 2018, Thapa was appointed home minister in the Oli Cabinet.

Days after becoming the home minister, Thapa had issued an arrest warrant against Chand.

Three years later, once comrades in arms, who had become comrades at war with one another, were sharing the same stage on Friday, as Chand formally agreed to renounce politics of violence.