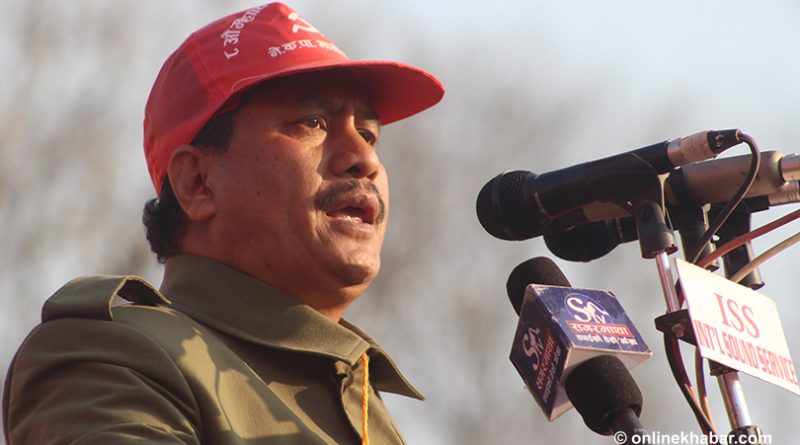 Amit Gharti and Bhakta Bahadur Gharti have filed nominations for the Thawang Village Council chair while the CPN has forged an alliance with the Nepali Congress in the vice-chairperson’s post.

The party that has been trying to foil the local level polls nominated its candidates in all the five wards of Thawang as independents. The CPN has not been registered with the Election Commission. In the second Constituent Assembly elections, people in the whole of Thawang had refrained from voting.

CPN Spokesperson Khadga Bahadur Bishwokarma, however, said those who filed candidacies independently were no longer the party affiliates.

The agitating RJP-N has also filed candidacies in different parts of Rupandehi, Kapilvastu and Nawalparasi districts. Hundreds of RJP-N cadres filed their candidacies in Kapilvastu alone. In Kapilvastu Municipality, Ramdas Gupta registered his name for mayor while Basudev Prasad Kasoudhan is in the deputy mayor race.

In Rupandehi district, RJP-N cadres filed candidacies in some village councils including Samarimai, Kotaimai and Marchbari. In Samarimai, the RJP-N has 37 independent candidates including Ashok Shukla for the chief and Kama Uddin Shekh for the deputy chief.

In Nawalparasi, some RJP-N cadres filed their candidacies having been released from police custody. They had been rounded up when the party cadres came out early on Sunday to foil the nomination process.

Chinni Pasi, who was released after he insisted on filing his name, was registered for the ward chair’s post in Ramgram Municipality-9.

A Madhesi leader said top leaders Mahantha Thakur and Rajendra Mahato, who were bent on barring other party candidates from contesting the polls, had failed to stop their own cadres.