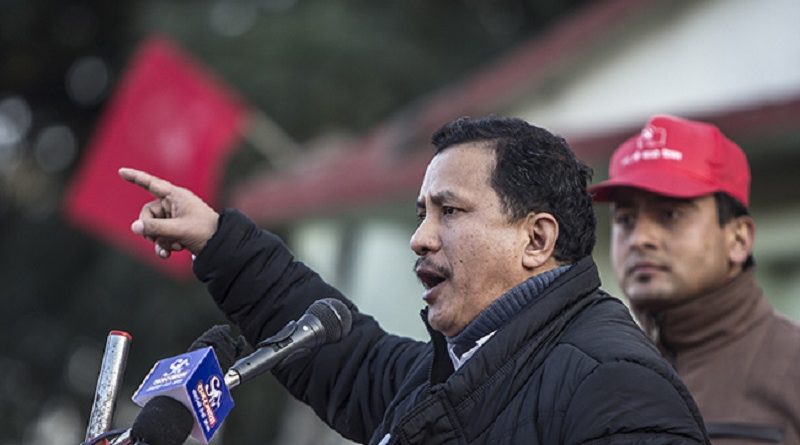 The Biplav-led CPN-Maoist, one of the Maoist parties that formed after splitting from the Maoist party that waged a decade-long insurgency, is serious about reinventing itself, it appears.

It has been proposed that the party rename itself as plain and simple Communist Party of Nepal. The party’s guiding principle will be Marxism, Leninism and Maoism.

Biplav was earlier with the Mohan Baidhya-led CPN-Revolutionary Maoist that had taken shape after Biplav and Baidhya split from the Prachanda-led CPN(Maoist). Two years ago, Biplav parted ways with Baidhya to form the present party.

Biplav’s party is organising its first general convention at Open Theatre. Party flags adorn the theatre and the vicinity. The party, though, has not invited CPN-UML Chair KP Sharma Oli and CPN-Maoist Centre Chair Prachanda at the inaugural. A Biplav Maoist leader shared with Onlinekhabar: We are not inviting Prachanda and Oli because both of them have deviated from the communist line. Moreover, the Prachanda-led government has adopted a policy of suppressing us. The party, though, has invited veteran communists Baidhya and Mohan Bikram Singh.

Before the inaugural, the Biplav Maoists will take out rallies from three points — Babar Mahal, Kalimati and Lainchaur. These rallies will converge at Shahid Gate after passing through thoroughfares of the city. From Shahid Gate, Biplav will lead the rally towards Open Theatre. It is expected that these rallies will affect vehicular movement in the Kathmandu Valley.

The plan is to inaugurate the convention by 1.30 pm. After that, leaders and leading activists will head for Rolpa. In Thawang of Rolpa, a closed session will start from 4 pm. The party claims that around 1,000 representatives will take part in the event.

The closed session will takke place at a community building in Thawang. Party activists have mobilised for a week for management of the whole event. At the closed session, Biplav will propose going for an unified people’s revolution. The idea is to encircle towns starting from cities, complete the revolution in a unique way and rename the party as Nepal Communist Party.