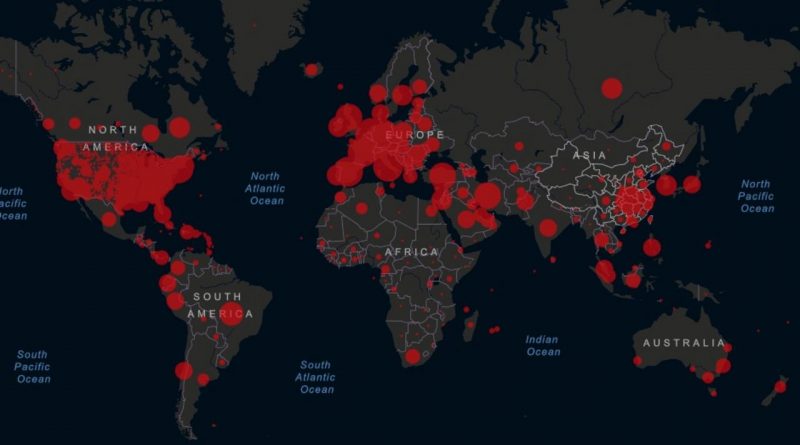 At present, the whole world has been infected by a pandemic, the Covid-19. Altogether 215 countries, big or small, rich or poor, have been under its attack. The infected person, traced on November 17, 2019, at Wuhan, has been declared as the zero patient of Covid-19. But, there is a sharp debate on whether or not he was the first one. Whatever it is, more than 5.6 million people have been infected by Covid-19 and the number of those who died of it has crossed 350 thousand till this article is being penned. The rate of infection is declining in some countries whereas it has been rising exponentially in many countries. More than one and half a million people have been infected while the number of fatalities in the US has already crossed 100 thousand. The number of countries that have crossed the 100 thousand deaths has reached 12. They are the USA, Brazil, Russia, Spain, Britain, Italy, France, Germany, Turkey, Iran, India, and Peru respectively. China, where more than 82 thousand people have been infected, has dropped to the 14th position after Canada.

The human being has had confronted many pandemics in the history. Of them, 20 pandemics are known to be very much dreadful ones. A huge amount of life and property was lost as of those pandemics. The pandemic, Spanish Flu, which appeared between 1918 and 1920, had infected more than 500 million people, and one-tenth of that number, 100 million, died. None of the pandemics occurs without any cause. A pandemic is an accidental occurrence that happens due to environmental imbalance in nature. At times, it appears as a big challenge before humanity. The present 21st pandemic, Covid-19, is also an outcome of necessity and chance.

At the beginning of human civilization, the frequency of pandemic was very low. The more the man intervened upon nature, the faster the pandemics came to happen. There were altogether 8 pandemics while arriving in the sixteenth century i.e. in the duration of 4,600 years. Only in the last 500 years, humanity has faced 13 big pandemics including the Covid-19. After capitalism developed in the world, the frequency of pandemics has increased in the same ratio as the intervention upon nature has increased on the part of the capitalist class. On top of that, after imperialism adopted the neo-liberal policy since the 1980s, this process has further intensified. Merely in a short period of 1980 to 2020 i.e. during forty years, there have been five dreadful pandemics. The pandemic is not a manmade event, it is the result of ecological imbalance that occurs due to the uncontrolled intervention upon nature of the capitalist class to extract super profit.

For the last few years, the debate related to the environment has heightened sharply. The natural scientists have been forcefully warning that if the emission of greenhouse gas i.e. carbon dioxide is not controlled the temperature of the world will rise by 20 Celsius till 2050, the Himalayas will melt, 570 big cities at the seashore and more than 800 million people residing there will drown into the oceans, the life of water animals will be at high risk due to lack of oxygen caused by excessive pollution. And, ultimately the existence of living beings will be jeopardized. None can say now what kinds of pandemics will come then with that situation.

The control of greenhouse gas emission has been one of the main agendas of the G8 and G20 Summits held every year. Almost all the developed countries agree to control it in every meeting. But the USA, which emits about one-sixth of carbon dioxide in the world, has detracted since 2019 from the Paris Agreement regarding the environment. If the emission of greenhouse gas is not controlled, it is sure that humanity will have to face pandemics more hazardous than Covid-19, among other catastrophes. The Covid-19, like other pandemics of the past, is a natural event. Nevertheless, the neoliberal policy that the present world system upholds has acted as a catalytic agent to create and spread such viruses causing pandemics.

On the other, the reason behind the failure of controlling the expansion of Covid-19 is the anti-people health policy the neo-liberal world system has adopted. This world system has, on the one hand, deprived the general masses of health facilities by making the health sector a field of earning super-profits for the monopoly capitalists. And, on the other, it has invested trillions of dollars to manufacture and stockpile nuclear weapons aimed at protecting markets from their adversaries. The scarcity of Masks, PPEs, and Ventilators, the primary health tools to fight Covid-19, clarifies where the imperialist system focuses its attention to. On top of that, the way how the USA diverted towards America the masks, France had purchased from China, from the Thailand airport has even exposed the moral status of USA, a superpower of the world. Hence, what is clear is that if the world system had shown a minimum of its accountability to people’s health, perhaps the Covid-19 could not have devastated the world to the level seen today.

The danger of any disease spreading like a pandemic remains until its medicine is invented. Till now, there is no vaccine for Covid-19, so it has spread all across the world like a pandemic. Some times before, the small-pox also had taken the form of a pandemic. Now, it does not remain as a pandemic because its vaccine has been invented. The Covid-19 is a transferrable disease. Till there is no vaccine for it, its expansion can be controlled only by preventing the transfer of the virus from one person to another. The only method that helps control its expansion to the community is to expand the medical test to the mass level, identify and isolate the infected persons, and quarantine the suspected ones. If the pandemic has spread to the community, then its expansion is controlled by undergoing lockdown of the affected area or the whole country. This is the only method to fight Covid-19.

The Covid-19 has spread all across the world, but its intensity is not the same in every corner of the globe. There may be many scientific reasons to happen so and they will be explored later. However, the difference that is witnessed among the states and their leaderships in the question of comprehending and fighting it seems to have played a role. In this context, there are mainly three trends. They are illiberal, liberal, and vacillating trends.

The illiberal trend is an anti-people trend. It has been manifested mainly in two states and their political leaderships. They are Donald Trump of the US and Jair Bolsonaro of Brazil. Donald Trump, in the beginning, did not even try to learn from what had happened in Wuhan, China. He remained complacent and more than that seemed to be pleased because its rival China would fall behind the US in the economic competition as of the Covid-19 pandemic. Even after Covid-19 patients were confirmed in the US he did not pay attention to it. He turned a deaf ear to the suggestions the medical experts had presented before the state authority and said the state cannot afford to people’s lives in the cost of economy. He created a nonsensical debate: economy versus people. Another president who followed this trend is Bolsonaro. Based on the number of infected and the deceased ones, America has stood first. Brazil is chasing fast to overtake the US. Now, Donald Trump is accusing China of hiding information regarding Covid-19. There is hardly anything other in it than his political trick to divert people’s attention towards China and make himself blameless.

Nowadays, Donald Trump has been attacking not only upon his main health adviser Dr. Anthony Fauci but also the entire World Health Organization, which according to him, is siding to China. It is to the extent that Donald Trump has threatened to quit from and stop the economic support to UN WHO if it does not ‘improve’ itself. There is a sharp polarization in the American society vis-à-vis Trump’s position on the handling of pandemic. On the other, Bolsonaro also is getting isolated in Brazil. His political opponents are talking about impeachment against him. Bolsonaro believes that the economy cannot be paralyzed in the cost of lockdown to fight Covid-19. The second health minister Nelson Teich resigned just within a month the president Bolsonaro had sacked the earlier health minister Henrique Mandetta. Both of the ministers had opposed Bolsonaro for his stance on reopening economy and providing hydroxychloroquine to the Covid-19 patients. Not the health crisis only, Brazil is now undergoing a deep political crisis as well.

The liberal trend is a pro-people trend. The political leadership of some countries acted in a pro-people manner to control the pandemic. They followed the suggestion put forward by experts, doctors, and virologists, unified the whole nation, and fought against Covid-19. China, in the main, falls in this category. Even when there was no prior knowledge about the Covid-19, one of the main reasons behind their stopping of expansion to other Provinces from Wuhan lies in their strength to operate as a unified and centralized leadership, the unwavering role of the state power and disciplined people. The political leadership and people of some countries like South Korea, New Zealand, and Australia, etc. too showed that pro-people approach. Now, these countries are preparing to loosen restrictions and reopen the economy. China is planning to test the whole city Wuhan to control the possible second wave of Covid-19.

Some countries failed to prepare a guideline to stop the expansion of Covid-19 even in the wake of its infection among their people. They were undecided in the contradiction between lockdown in the cost of economy and economy in the cost of people’s lives. In addition to this, the weak authority of state in the medical sector, the obvious result of neoliberalism, and anarchy caused by the concept of personal liberty of the people played a role to keep up this contradiction. Neither the state could play a centralized role nor did the people help the state in a disciplined manner to control the pandemic. As a consequence, the Covid-19 spread to the community level. Later on they locked down the country but that was too late. The weakness of the developed capitalist countries like Italy, Spain, France, Germany, Britain, and Russia to learn and act from the terrifying effect of Covid-19 in Wuhan, China, remains in the vacillation of their political leaderships, the weak role of the state, and anarchy of the people. The result is open to all.

There may be many other reasons like ignorance, poverty, arrogance, complacency, and religious superstition behind the expansion of Covid-19. In some countries or regions, either one of these reasons or more may have played a role. Nevertheless, the main reason behind the exponential rise of Covid-19 cases and its extension to the mass level is illiberalism and vacillation on the part of state authority.

Today, the Covid-19 has exposed the real essence and character of imperialism that had been able to confuse the masses through various forms of deceits and conspiracies. The imperialists, who have stockpiled the nuclear weapons that can several times turn the world into ashes by spending trillions of dollars, have now started twisting arms for a mask that does not cost even 20 cents. The Covid-19 has created a horror all over the world, people have untimely died, it is very sad. But it has introduced a debate within the capitalist camp that the state should play a strong role, the state should emphasize national production based on people’s needs, the state should be fully responsible for health and education, etc. And more than that it delivered a true message that neoliberal capitalism has failed and the time has come to seek an alternative to it. Naturally, that alternative is scientific socialism. This is the reality the Covid-19 has exposed.