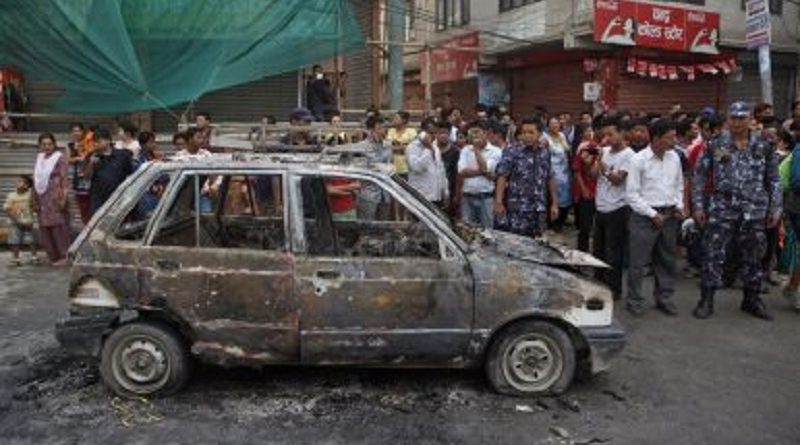 This author of this article is Kamal Dev Bhattarai, a bourgeois writer and journalist.

On February 22, one person died and two others were seriously injured when a bomb exploded at the entrance of Ncell’s office, located in Nepal’s capital city of Kathmandu. On the same day, bombs were planted targeting more than a dozen towers of Ncell, a multinational telecommunications company.

Two days after the blast, leaders of the Communist Party of Nepal, helmed by Netra Bikram Chand, telephoned correspondents of major media outlets to take the responsibility for the blast. The party leaders said that they had attacked the Ncell office to punish the company for not paying taxes to Nepal’s government. The party said that they had no intention of attacking the general public and apologized for the death of a civilian.

On February 6, Nepal’s Supreme Court had ordered Ncell and its parent company Axiatia to pay a tax bill of 61 billion Nepali rupees (roughly $550 million), excluding late fees and fines. The Chand-led Maoist party used this issue as an excuse to show their strength. Along with attacking the Ncell office and towers, the group also exploded bombs at the construction site of the Arun-3 hydropower plant, which is being constructed by an Indian company.

The Chand-led Communist Party is a splinter group of the Maoist party, which in 1996 launched 10-year long insurgency. The resulting conflict claimed the lives of more than 16,000 people, leaving thousands injured. Hundreds still remain missing. Since joining the peace process in 2006, the Maoist group has split more than four times. One of the offshoots is the Chand-led Communist Party of Nepal, which claims to be an original Maoist party. Chand and other leaders were against joining hands with parliamentary parties in 2006 to sign the Comprehensive Peace Agreement (CPA).

Chand, who is now leading a separate Maoist party, split with Prachanda when the latter chose to pursue peace and a new constitution, abandoning the dream of seizing power through armed revolt. Chand criticized Prachanda, claiming he surrendered with revisionist forces and betrayed the cadres who had contributed during the long insurgency period.

Chand, along with other senior Maoist leaders such as Mohan Baidya and C.P. Gajurel, expressed their reservations over the party’s line of army integration and constitution drafting and formed a separate party. Later, Chand left Baidya and Gajurel and formed his own party, drawing the support of radical Maoist leaders and cadres.

The Maoist party led by Chand now has emerged as a challenge to the government led by NCP Chairman K.P. Sharma Oli and for Prachanda himself, who is considered as prime minster-in-waiting. Former Maoist cadres who were against embracing the multiparty democracy and the integration of combatants supported Chand. His party boycotted the second Constituent Assembly (CA) elections held in 2013 and the three-tier elections held in 2017; the party also opposes the 2015 constitution. The Chand-led Maoists say that Prachanda abandoned the key agenda of the Maoist movement and Chand claims his goal is to fulfill the remaining agenda of the Maoist revolution.

In the initial years, political parties did not take Chand or his party seriously, due to its low strength and limited presence. But with the formation of a new government last year, it seems that the Maoist splinter group has emerged as a security challenge for Nepal. In recent months, Chand’s party has increased its presence and violent activities in some parts of the country, mainly in the far-western and mid-western regions, which were the heartland of the Maoist movement. Its leaders and cadres who were semi-underground are now totally underground. There are reports in local media that new party is collecting donations from businessmen, whether voluntarily or through extortion.

Through local media and their party mouthpiece, party leaders say that they have formed paramilitary forces, which have not been made public yet. Of late, security forces have arrested dozen leaders of the Maoist party in possession of some sophisticated weapons, which have further raised concerns about the law and order situation in the country. On March 7, police raided Chand’s hometown, located in Kapilbastu district, and seized arms and ammunition. According to local media reports, security forces seized two submachine guns, 68 rounds of bullets, and three magazines.

Chand and other leaders had expressed displeasure over the integration of Maoist combatants into Nepal Army, which Chand termed as surrender. Out of 19,000 Maoist combatants verified by United Nations Mission in Nepal (UNMIN), only about 6,500 were integrated into the Nepal Army; the rest retired or disappeared. During the verification process of weapons and combatants, some Maoist weapons were found missing. Now, the security forces’ investigation shows that Chand-led Maoist party is using the same weapons.

The mainstream political parties who drafted a new constitution in 2015 and participated in the electrical process have yet to reach on a common position on how to view the new emerging Maoists under Chand. After the violent activities of last month, the police have started to arrest the leaders and cadres but there is no clarity on how government views this party. Is it a political issue or a law and order problem? There are divergent views within the ruling NCP as well as in the opposition. A few months back, the government had formed a committee to hold talks with dissatisfied groups but that didn’t include discussions with Chand’s Maoist group. However, the government is increasingly under pressure to address this issue without any delay.

Baburam Bhattarai, a former Maoist ideologue now who leads the new Naya Shakti Nepal Party, urged the government to reach out to the Maoist splinter group. Addressing the Parliament on March 5, Bhattarai said, “I am worried because energetic youths are supporting Chand-led party. Some youths are seriously supporting this group. If we fail to deliver stability and development and maintain good governance, I see the danger that the group would get further strength.”

Prachanda, meanwhile, finally broke his silence over the activities of the Chand-led Maoists a few days ago, saying that the government will seek a way out of the problem.

On Tuesday, a government cabinet meeting declared the Chand-led Maoist party a criminal group and decided to curb its activities. With the cabinet decision, security forces have increased their vigilance against the leaders and cadres of the party. The government reached its conclusion after repeated fruitless attempts to hold dialogue with Chand.

On its journey of peace and stability, Nepal needs huge foreign investment to fulfill the aspirations of development and prosperity. The violent activities of Chand’s Maoist party will affect the investment climate, particularly as it has targeted multinational business endeavors in the country.

After three decades of chronic political instability, Nepal has just embarked a journey of peace, stability, and development. The rise of a new Maoist splinter group could jeopardize that.