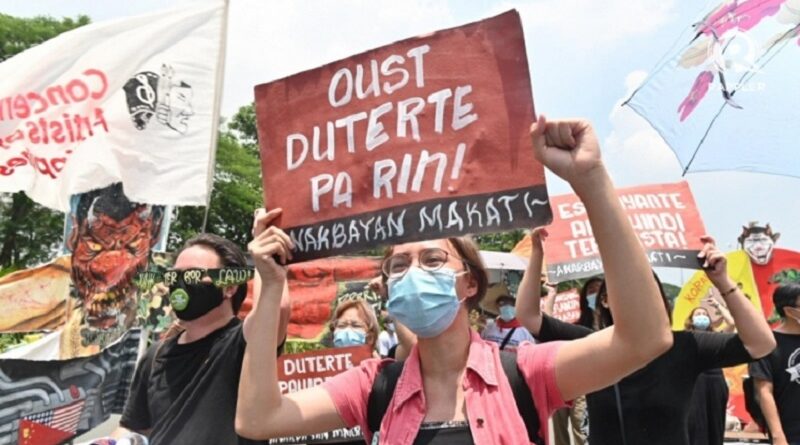 The tyrant Duterte yesterday delivered his fifth state of the nation address, spewing out lies, empty boasts and threats. His address failed to touch on the real conditions of workers, peasants and other classes and sectors who are suffering one of the worse crisis of the past several decades.

He sought to wash his hands of any responsibility for the current crisis by heaping blame on the Covid-19 pandemic. He was desperately covering up the fact that it is his delayed, incompetent, militarist and bungled response to the pandemic that has caused widesrpead economic devastation and hardships on the people.
He spoke of “gains” of the past years that were lost during the Covid-19 pandemic. In the first place, as far as their socio-economic conditions are concerned, the broad masses of the people have not gained anything, only losses, especially in terms of jobs and income. Even before the pandemic, the Filipino people have suffered worsening hardships as the economy continues to slump in crisis.

The “comfortable life” which Duterte has repeatedly promised the people is enjoyed only by the big bureaucrat capitalists and their ilk among the big bourgeois compradors and big landlords.

Duterte reiterated his plan to pursue infrastructure building as his key economic policy, which the Filipino people have gained nothing from, many of which are driving them away from their homes and livelihood.

Duterte had nothing to say about the people’s urgent demands for higher wages, jobs and livelihood especially in the face of the current economic crisis. He merely wants to drive away millions of unemployed in Metro Manila back to the provinces where they have no land and no jobs.

The Filipino people are seething in unrest due to widespread hunger, poverty and joblessness, and the regime’s abandonment of their well-being. With his terror law, Duterte seeks to suppress the burgeoning protest movement. The arrest of activists planning to join yesterdays protests, police monitoring of church masses leading to seizure of protest paraphernalis and the confiscation of copies of the Pinoy Weekly news magazine are signs of worse things to come.

Despite threats of arrest, several thousands converged yesterday at the UP Diliman campus in a show of militant defiance. In the face of worsening crisis and corruption of the regime, these protests are bound to grow even bigger in the coming weeks and months.

At the same time, the armed revolution is set to grow in strength as the Duterte regime pushes more and more people to either join the New People’s Army or extend it material and political support. In line with its duty, the NPA must continue to wage armed resistance and deal blows against the regime’s criminal and fascist minions.