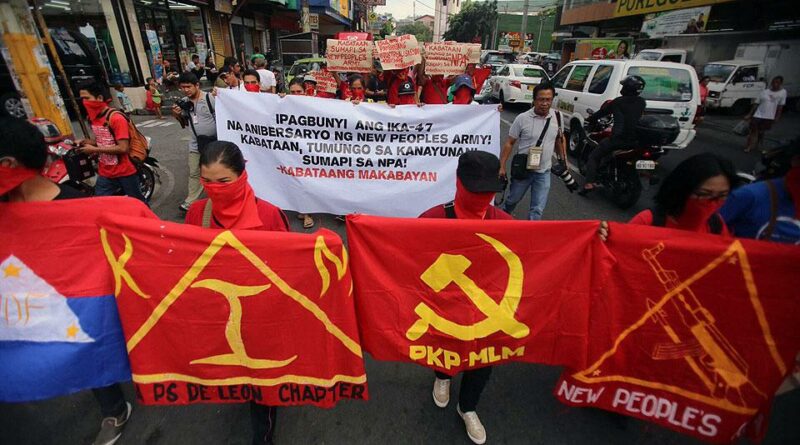 The Filipino youth, under the unwavering nationalist and democratic underground organization of Kabataang Makabayan (Patriotic Youth) in Southern Mindanao Region, highly salutes the people’s revolutionary army, the New People’s Army, on its 52nd founding anniversary for its steadfast and relentless service to the people, wielding arms against capitalists, landlords, bureaucrat capitalists, and imperialists.

In a semi-colonial and semi-feudal system, perpetuated by the fascist puppet regimes of imperialists, armed struggle remains the only solution towards the end of exploitation and genuine national liberation especially now more than ever as the Duterte regime intensifies its attacks to forcibly consolidate his power amidst the growing civil unrest.

Just like their fascist predecessors, Duterte and his minions are nothing but lapdogs to imperialist countries who are desperate to still shamelessly pretend as the people’s “ally” while blatantly ignoring the masses’ legitimate demands just so they could push for their abominable self-interests. The Duterte regime is, without a doubt, a scourge to all Filipinos.

In Southern Mindanao Region, rice farmers are facing crisis, even now when lockdowns and travel restrictions have been relaxed, with having to sell their produce at Php 10.00 per kilo to unscrupulous rice traders or at even lower prices to the reactionary government. This paltry farm gate price leaves rice farmers deeper in debt.

Similarly, in one hectare of land for corn production, the total production cost runs up to approximately Php 42,000.00, while profit is only around Php 35,000.00. The net income therefore is only Php 7,000.00, when production costs are deducted. This means that the farmer is merely earning P 59 a day. Meanwhile, according to local case studies, a local trader gains Php 26,000 while imperialist agricultural companies gains Php 11,000 for the produce of one farmer alone. The Philippine’s export-oriented and import-dependent economy, with all the agricultural companies presently exporting corn, imperialist companies gain around Php487 billion for corn production alone.

The COVID-19 funds allotted by the government is approximately Php 900 billion but the relief goods that have been given to the poor were barely enough with only 3 kilos of rice, 2 cans of sardines, 2 instant noodles for a month. Meanwhile, as stagflation worsens, the prices of meat and fish and other basic commodities have increased dramatically, with fish now costing PHP 160-170 per kilo, and pork and chicken at PHP 180-320 and PHP 180-200 respectively. As the prices of basic commodity increases, the minimum wage meanwhile remains stagnant.

The maneuverings of the Duterte regime to push for its own interest worsen the colonial, commercialized, and fascist system of education in the country. Even before the pandemic, education, which is supposed to be a basic right, has already become a profiteering scheme riddled with redundant, exorbitant, and dubious fees, making it impossible for millions of Filipino youth to achieve education. Students were forced to leave school, be it temporarily or permanently, and find jobs to help support their families.

With the extreme health and economic crises due to the pandemic, approximately 65,000 students have decided not to enroll in universities and colleges this academic year, which is double the number from the last semesters. Some students even committed suicide due to the countless modules and schoolwork they had to accomplish, coupled with the immense pressure of the blended learning and other pressing problems.

In Davao City, further crisis looms as Duterte’s daughter, Mayor Sarah Duterte, remains unyielding in her stance to remove PUJs, PUVs and Filcab to pave the way for so-called “modernization projects”. This will severely affect 40,000 drivers, operators and their families, damning them to unemployment and financial ruin. Moreover, Build, Build, Build projects have caused unrest among urban poor communities as the local reactionary government issued demolition permits even amid the COVID19 crisis. One such community is found in Mahayahay in Brgy. Matina, where the LGU’s demolition order has displaced more than 300 families, with 170 families still awaiting for a relocation site. Worst, 30 out of the 170 families remain homeless and are currently residing in makeshift shanties beside a river.

In these trying times of great unrest, more and more people are bravely standing and fighting against the tyrannical rule of the fascist Duterte regime. In response, Duterte and his minions are not only railroading Charter Change but has already railroaded the most challenged Anti-Terrorism Act, dubbed as Terror Law for its vicious and inhumane provisions, including legitimizing illegal arrest and detention and surveillance. It mainly aims to silence dissent as human rights violations, extra-judicial killings, and red-tagging intensify.

The NTF-ELCAC, which is the main perpetrator of Duterte’s state terrorism, hopes to sow immense fear not only from the masses but even among the revolutionary cadres in the CPP and the NPA. It is spending billions of taxpayers’ money in order to entice the masses and revolutionaries to betray the revolution. It is parading so-called “surrenderees,” majority of whom are unarmed civilians like farmers and indigenous people, to slander the CPP and besmirch the NPA with recycled black propaganda.

However, three truths remain unchanged – one, we are still oppressed and exploited; two, the US-Duterte regime is still inutile and three, the national democratic revolution, with the armed struggle as the main form of resistance, remains our only hope in resolving the roots of our exploitation. Which is why we must always dare to struggle, dare to win, as we firmly uphold our political line.

As we salute the NPA’s commitment to the revolution, we also remember all the youth who were martyred in the our valiant struggle. We honor Ka Lucas, Ka Chen, Ka Purga, Ka Wakin, Ka Astro, and Ka Do and all other outstanding revolutionary youth in the region whose life and times exemplify the true definition of “serve the people”. Their deaths are not forgotten as they lay the foundation in building our bright socialist society. Marxism-Leninism-Maoism, the ideology which they held firm in, echo in many universities and the streets, calling more and more youth to the path of proletarian revolution.

Kabataang Makabayan-Southern Mindanao Region reiterates its call to the youth to join the armed revolution to defeat the three basic problems of the country: FEUDALISM, BUREAUCRAT CAPITALISM, and IMPERIALISM. When the enemy bares its fangs against the people, it is the youth’s mandate to revolt, equipped with the sharp ideology of Marxism-Leninism-Maoism. A revolution is always bloody; overthrowing the rotten system entails bloodshed because we know that the ruling class and its semi-feudal and semi-colonial state will use all means to maintain the status quo. But we, the youth, also know that sacrifices are inevitable in the people’s protracted war as we march onward to victory.