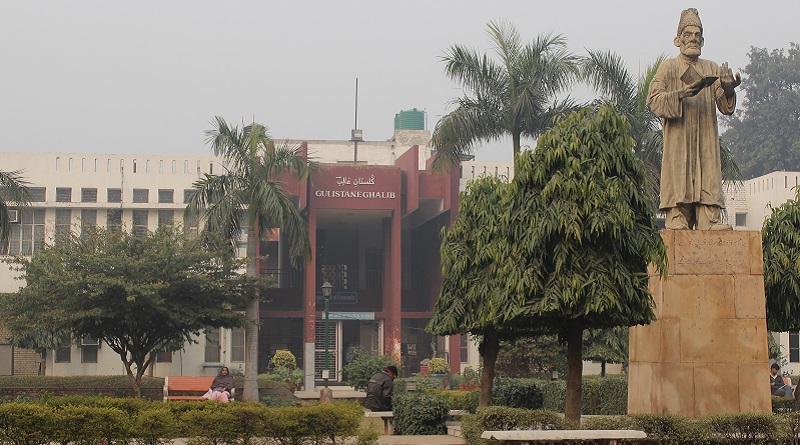 “The worst illiterate is the political illiterate, he doesn’t hear, doesn’t speak, nor participates in the political events. He doesn’t know the cost of life, the price of the bean, of the fish, of the flour, of the rent, of the shoes and of the medicine, all depends on political decisions. The political illiterate is so stupid that he is proud and swells his chest saying that he hates politics. The imbecile doesn’t know that, from his political ignorance is born the prostitute, the abandoned child, and the worst thieves of all, the bad politician, corrupted and flunky of the national and multinational companies.”

On October 7, 2016, the ‘mighty’ hostel administration in Jamia Millia Islamia once again employed its age old weapon of show cause notice to suppress the dissenting and democratic voices of the students. In a vindictive action in the aftermath of the open letter written at the time of the visit of HRD minister to inaugurate the new hostel, the administration served show cause notices to the students. Begum Hazrat Mahal Girls’ Hostel residents received the stern ridiculous warnings from the authority which ‘places itself above the society of students’. The reason of show cause was the protest over the visit of Union HRD minister. A docile robot of a government that vilifies the dissenting students at any cost. The authority here is the funny general whose tank is a powerful vehicle, it smashes down forests and crushes a hundred men. But it has one defect: It needs a driver. Its bomber is powerful. It flies faster than a storm and carries more than an elephant. But it has one defect: It needs a mechanic. But this authority doesn’t know we, the students are very useful. We can fly and can…But we have one defect: We can think.

The students have been asked to explain their ‘misconduct’, ‘rude behavior’ and ‘non-participation in hostel activities’. Yes, the students showed non-participation with a Govt. that institutionally murdered Rohith Vemula. The show cause notice looks down upon the students, simply alleging misconduct without substantiating it. Now if my head is full of fire, and grief and my tongue, runs wild, pierced, with shards of glass.” (Lorca) do I commit some extra? The administration and its over fluent potency must know that. There is not and cannot be a pre-requisite condition of allotting hostel to only those who ‘participate’ in so called hostel activities. The sole ground for hostel allotment must be the student being a bonafide student of Jamia. Hostel is a fundamental right which is integral to the basic right of education. Access to education is entrenched in access to hostel thus, exercising her own debate, dissent and difference is an elementary question of right to freedom for a student.

Abusing their privilege, the authority has asked the girls to maintain discipline in the hostel and not to engage in ‘misconduct’. Would they once teach us how not to refuse their image of irrationality and their silly memory of a bizarre culture of sending absurd show causes? Here, the language of the notice is extremely regressive as it compels the students to participate in hostel activities curbing their democratic right to protest and to dissent. Administration is constantly worsening to come out of its very paternal, patriarchal behavior which builds to feed the women with abnormality of ‘goodness’ to ‘goddess’. We are no goddesses. We just know where we are standing currently, thus we are not dead. We know how to improve our performance of non-cooperation with a dictator government after every defeat, every heartbreak, every loss that contains its own seed, its own lesson.

We dream for a university that upholds a real space of freedom of opinion. For this we fight. We might lose but we also recognize that those who don’t have already lost. Administration has lost a game to the students. A game that is built under the special repressive force of state but always identified and located by the students who dream to materialize their own rights in a university where whispered threats try to seize us. We call for a united fight against the act of sending absurd show causes to students en-mass who differ, who voice a dissent to exercise a thought that stands with the larger struggling mass of the society and refuse to align with a government and state nexus that only makes obedient robots who spill patriarchal and authoritarian venom on dissenters.

Students have the democratic rights to refuse thousands of HRD ministers like Javadekar or any ‘generals’ who institutionally murder students, privatize the institutions in the name of expansion strategy or quality education, sell education to traders making it a tradable commodity, attack poor, Dalits, Muslims, other minorities and Adivasis, assault students coming from lands fighting for their self-determination. When state effectively tries to lull the ordinary person to sleep by obscuring the important basic fact only revolutionary unity of students can create a new organization, that is capable of serving the exploited against omnipotence of big banks, grand scale privatization policy and acute repression.