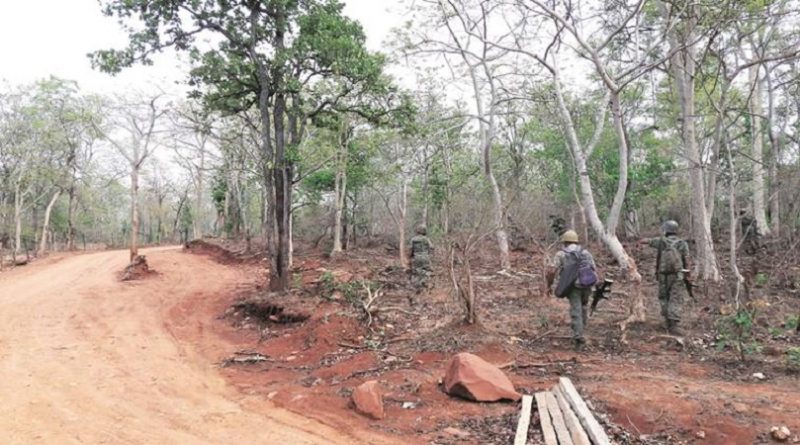 The new area covers forested pockets in districts such as Balaghat in Madhya Pradesh, Gondia in Maharashtra, and northern Rajnandgaon and parts of CM Raman Singh’s home district Kabirdham and Mungeli in Chhattisgarh.

For a little over a year, left-wing extremists operating in Chhattisgarh, who have been largely confined to the Bastar region in the south, have been attempting to create an entirely new zone along the western border, according to a Maoist document retrieved by state police. The new area covers forested pockets in districts such as Balaghat in Madhya Pradesh, Gondia in Maharashtra, and northern Rajnandgaon and parts of Chief Minister Raman Singh’s home district Kabirdham and Mungeli in Chhattisgarh.

The 25-page document, recovered in April this year, describes the new area as the MMC (Maharashtra, Madhya Pradesh and Chhattisgarh Confluence) zone. It indicates that the idea is to create an entity like the Dandakaranya Special Zonal Committee in Bastar.

Drafted in the form of a review of the year’s progress in the new zone, the document also highlights issues specific to the area that the leadership must take up to win over villagers, such as land, differential pricing of bamboo in different states, and even demonetisation.

Senior police officers confirmed the contents of the document, believed to have been authored by the “MMC Leading team” in March 2017, and said that this marks the first expansion by Maoists in the region in at least eight years.

Speaking to The Indian Express, D M Awasthi, Special DGP (Anti Naxal Operations), Chhattisgarh, said, “Yes, it is true that they are attempting to create a new zone called MMC. We are well aware of it and have been working against it. The first intimation we got about this development was in April 2016. Since then, they have been trying to build, and influence villagers for the past one year. We have taken various steps, such as organising troops and building an intelligence network. So far, they have had little success. There have been some close calls with their leadership in the area, and exchanges of fire as well, but no casualties. A new zone is indeed a matter of concern, and requires us to be especially vigilant.”

While Rajnandgaon is not new to Maoist violence — in 2009, the then SP Vinod Choubey was killed in an ambush along with 29 other policemen — their activity was restricted to the southern parts of the district. However, Kabirdham and Mungeli have seen little or no Maoist activity so far.

Senior police officers confirmed that the MMC is the first zone that the Maoists are building after the BBM (Bolangir, Bargarh, Mahasamund) division under the Orissa state committee between 2006 and 2007.

According to intelligence sources, the Maoist hierarchy sent 58 senior and middle level cadres, headed by a Maoist commander Surender, to expand and operationalise the MMC in November 2015. “Darbha divisional commander, Surender, was promoted to a rank equivalent to a Dandakaranya Special Zonal Committee member and has been camping in the forests in those areas, heading the attempted expansion process. He is also known as Madkami Soma and hails from the Golapalli area in Sukma,” said a senior officer.

Police sources said that a small division of Maoists in the region, called the GRB (Gondia, Rajnangaon, Balaghat), with between 20-30 members has merged with the team from Bastar, creating a cadre of at least 80 Maoists.

”They have created what they call two vistaar platoons, numbered 2 and 3, and along with the existing GRB division, are in charge of the expansion,” said another officer.

Officers, however, said that other documents, recovered from scattered exchanges of fire in the past year, have revealed that the Maoists have not seen much success thus far, and are still in the initial stages of “gaining people’s trust and building village level committees”.

Prashant Agarwal, SP, Rajnandgaon, said that thus far, exchange of fire with the Maoists of the MMC in Chhattisgarh has been restricted to northern Rajnandgaon. There have been reports of their movement in Kabirdham, but no firing has taken place there, he said. Mungeli, he said, has not seen any Maoist movement.

According to senior officers, there have been nine instances of exchange of fire in this area in the last year, with one jawan killed in an encounter in Bhave in February 2017 — an SLR and 12 bore rifles were among the arms recovered.

On one occasion, the Maoists attacked a security guard at an ATM in the town of Khairagarh, injuring him and taking away his rifle. On two other occasions, vehicles were burnt on under-construction roads in January and June.

Officers said there are also indications that the top leadership of the Maoists, possibly members of the Central Committee, have visited the region to push the process.

“In the encounter where the jawan was killed, we found recent editions of the Economic and Political Weekly, right up to December 2016, which indicates that a senior leader was present,” said an officer.

The recovered Maoist document includes a section, which says that efforts need to be taken to increase “political awareness of the movement”. “We have to familiarise village level committees of the strategies and policies of the people’s war,” it states.

The document says that there have been encounters in September, December and February, where the Maoists lost key papers, leading to security forces learning of their plans.

“After this, there has been a change in the forces’ plans. Camps have been put, and cordoning and searching has been increased. There are conducting searches after gaps of three or five or seven days, and coordinated missions have been increased. On one occasion, these operations lasted for four days. They have assessed the danger of our expansion into this zone from a political standpoint, which is why there are alerting more troops here,” it states.

The document also cautions cadres to remain “mobile” and not “stay in one place at a time”. “Once the forces’ location is received, information about the circumstances must be gathered in two hours, and taking into account their capabilities, a plan for attack must be formulated. By firing from one side, and trapping them from the other, this strategy must be employed. Instead of wasting energy by chasing them, on specific information, ambushes should be laid… Ammunition should not be extensively used, but explosives devices must. Our attack should be based on different types of booby traps and mines,” the document states.

Senior officials indicated that Chief Minister Singh has been kept abreast of the developments, with the topic coming up during his month-long Lok Suraj campaign in May, including in Kabirdham.

Besides, they said, new security camps have been opened over the past year in the region.

Between May 8 and June 8 this year, Chhattisgarh Police, ITBP and Madhya Pradesh’s Hawk team set up a joint temporary camp to conduct operations and facilitate the building of a 13-km road from Gatapar to Malaida village in Rajnandgaon, which till then had not seen much Maoist presence.