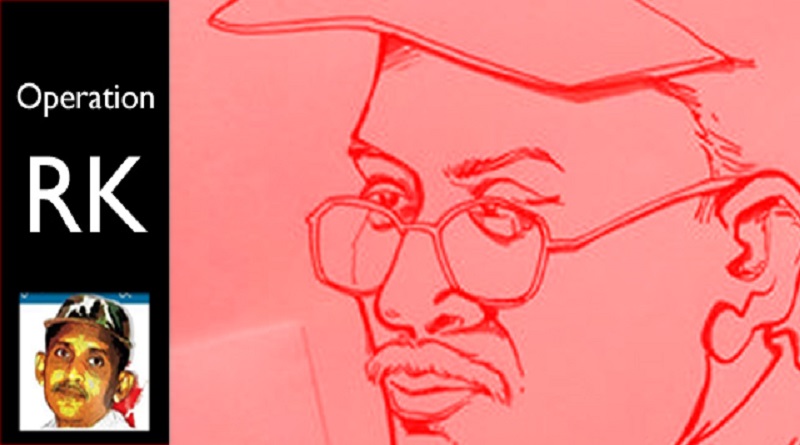 ʹThis time the Greyhounds and their Odisha counterparts were taking no chance. About 80 of them, armed to the teeth, were ferried by copters to Munchingput three days before they attacked their targets. With only dry fruits to sustain them, they covered the 25 km carefully to avoid being spotted. ʹAt times we moved 200 mts in two hours and there were occasions when we sprinted 2 km in 30 minutes. We swam across rivulets and crawled on our belliesʹ, said a Greyhounds commando on condition of anonymity. They maintained radio silence and reached the designated area based on GPS inputs.

The assault team closed in on the camp in a ʹvʹ formation and opened fire, leaving only one side open for the Maoists to flee.

ʹThe escape side had a hillock and we did not encircle the camp, as our men might be hitin the cross fire. Even before the lone sentry could fire and alert the sleeping cadres, we struck and their retaliation was not to the expected scale,ʹ said a senior police officer engaged in anti-Maoist operations.

Sources said the planning took place with consultations between the top police and paramilitary officials posted in Odisha, AP and Chattisgarh and with inputs from IB.ʹ
This is the excerpt from ʹThe Hinduʹ website dated 31st October 2016. This strengthens our allegations that the AOB Encounter is not a real one but one sided attack by the AP Greyhounds, their Odisha counterparts and the central governmentsʹ paramilitary forces. It was a planned cold blooded murder.

This was the biggest ever Encounter which in its first phase concluded on the 29th of October due to incriminating weather resulted in the death of 32 people in total started on the midnight of the 23rd October. In the first casualty, it was 18 on the spot in Bejjangi Ramaguda area of malkangiri district in Odisha. It is also the cut off area near Balimela reservoir constructed between AP and Odisha. This Encounter killing spree continued with 4, then 2 and ended with 4.

Earlier in 2004, Gajarla Ravi had participated in the ʹTalksʹ with the government of undivided AP. He was the state committee member of North Telangana SZC.

It turned out that chalapathi and aruna are safe but RK is injured and not out of danger. Since the Greyhounds had failed to kill their target, the DGP and the Rural SP of Visakhapatnam and the DGP of AP are deliberately giving news to divert the minds of the people who are anxiously waiting for the whereabouts and safety of the leaders and cadres of Maoist party and the Adivasis.

On the 25th of October, under the leadership of Amarula Bandhu Mithrula Sangham (ABMS), the organization of martyrs relatives and friends, families of the declared and suspected deceased left for Malkangiri. Chiiti Babu( president of APCLC), G. Kalyan Rao (virasam) and I had accompanied them from vishakapatnam.

In the afternoon around 2 pm, two photos of the deceased appeared on WhatsApp. They were identified as Venkatramana alias Ganesh of vishakapatnam district and Samala kishtaiah alias Daya of dasireddyguda, yadadri district of the Telangana state. Both of who were the state committee members of AOB SZC. On reaching Malkangiri, we got to know of 18 names given in the statement issued by Jagabandhu, spokesman of AOB SZC.

The later inclusion was PKM Prabhakar alias Gangulu who was a renowned performing artist and cultural activist for the last 25 years, founder member of the Praja kala Mandali. He had gone underground after the formation of Telangana state in 2014. He was from Yapral, cantonment area now in Medchal district of Telangana. Irony is that his wife Devendra, leader of chaitanya mahila sangham, was accompanying her collegue swapna to collect the dead body of her mother-in-law Bharathi alias Latha( Area committee member AOB). Bharathi, a middle aged woman, was the wife of Dubas Shankar( State committee member AOB SZC). Now its turned out that devendra also had to collect her husband Prabhakarʹs dead body.
Sirisha, wife of Rama Krishna, had come to collect her son pruthvi alias munna(section commander AOB). She had come from Aalakura padu, prakasam district of AP. Now her husband RKʹs life is in danger.

In malkangiri SP office, 28 dead bodies were put in wooden boxes. By then, only 14 were identified by the police. The photos of the deceased were numbered along with the boxes. Whether the post mortem was conducted according to the NHRC and the recent Supreme courtʹs judgment is not known. The dead bodies were not preserved in the ice box(freezer). Even if the post mortem was conducted, the bodies were not shown to the relatives of the deceased before it was conducted. Whatever may be the claims of the authorities, the dead bodies were not preserved as per the law. The blood was oozing out of the bodies and on each body severe torture was to be seen. Faces were defaced, legs were cut, intestines and flesh was coming out, breasts of women were cut. In the box numbered 20, we found a beheaded womanʹs dead body and we were shocked. We complained to the SP. He had shown the photograph of the deceased and said that the head must have been removed at the time of post mortem and the doctors must have forgotten to stitch it back. It shows the carelessness and sheer disrespect for the killed human beings, as they were alleged Maoists.
The encounter continued in the killing fields of Malkangiri area up to paderu of vishakapatnam district till the 29th October. Paderu is the ITDA headquarter. 2+2 dead bodies were thrown in the government hospital on the 28th and the 29th.This paderu is the epicenter of the 16 year long struggle of adivasis of chintapalli forest under the leadership of CPI Maoist against the bauxite mining operation of a Dubai company. The adivasi women of Vakapalli and Bhalluguda were mass raped by the Greyhounds for fighting against the bauxite mafia. The mass rapes in these two areas caught the attention of the people country wide. The issue had gone up to the Supreme Court.South Odisha is known for the struggle against Vedanta and POSCO.

Though this Encounter was called ʹOperation RKʹ, it is in fact operation mining of rich minerals in AOB area. This hunt of adivasis and Maosists is infact the third phase of green hunt operation. Now called, ʹmission 2016 – war on peopleʹ. More than half of the encountered are adivasis and about half are women.

Hence, we demand for the judicial enquiry by the Supreme Courtʹs sitting or retired judge, as the two states and the central government deployed their military forces in these killing fields.

Alarmingly, it has been more than a week now that the whereabouts and safety of RK, the central committee member CPI Maoist, are unknown. People all over the country, particularly of the two Telugu states, are agitated over it. He had become a familiar face during the ʹTalksʹ with the undivided Andhra Pradesh (October, 2004) through media, so people can easily recognize him. Earlier when the CPI Maoist had taken the political leaders including the MLAʹS, IAS officers as hostages, it had released them unharmed with the intervention and appeal of the democratic forces. Same could be seen when police constables were taken as hostages in Chattisgarh, Jharkand and AP. Unless it is a face to face real encounter, in most of the cases, the hostages were released sooner or later by CPI Maoist.