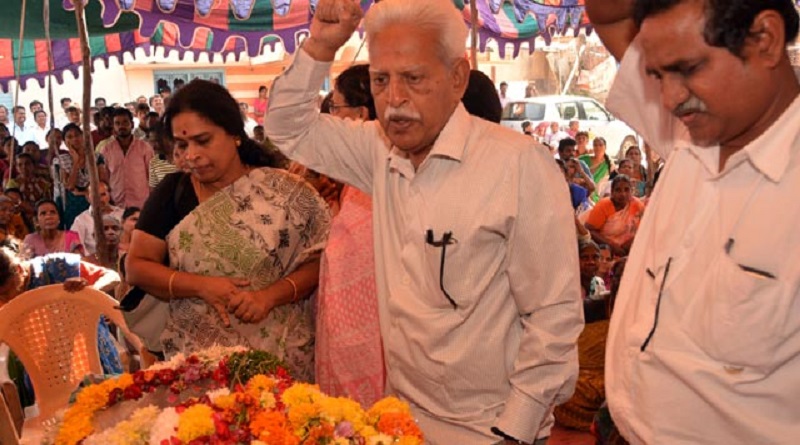 Hyderabad: Demanding that Maoist leaders including Ramakrishna be produced in court immediately and opposing  the allegedly ‘fake encounter’ that took place on the Andhra-Odisha border, revolutionary writer Varavara Rao along with members of civil society organisations staged a dharna in front of NTR Trust Bhavan late on Thursday evening.

Tension prevailed near TDP office for about two hours as the activists resorted to slogan-shouting and blocking of traffic. When the police intervened and tried to arrest them, they resorted to pelting of stones at the TDP office. The police who were present in large numbers resorted to lathi charge and later arrested them.

Speaking to the media, Varavara Rao said he had credible  information that some important Maoist leaders including Rama  Krishna popularly known as RK and Gajarla Ravi, secretary of the Andhra-Odisha Border (AoB) area were taken into police custody immediately after the alleged  encounter at Andhra – Orissa Boarder (AoB) in which more than 20 extremists were killed recently.

He questioned the government for not producing them before the Courts. Varavara Rao said that they did not believe the statement of Visakhapatnam Rural SP Rahul Dev Sarma who had said that no Maoist leader was in police custody.

Addressing the protesters, Varavara Rao warned that the TDP government would be held responsible if any harm was done to RK and his associates. He lashed out at the AP government for resorting to fake encounters on the pretext of combing operations in the forests areas.  He demanded that the government make public the post- mortem  reports of the slain Maoists.