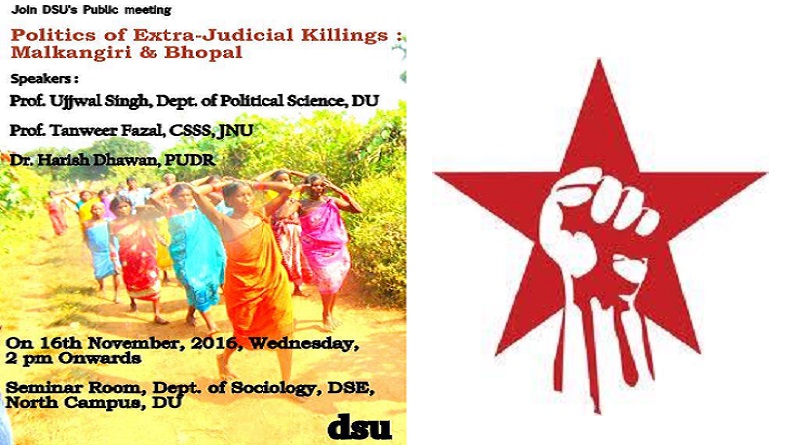 Why are some lives cheaper than others?
Looking at the brutal extra-judicial killings in Malkangiri and Bhopal

In the last few weeks, two brutal killings sent shockwaves through the country – the massacre of 40 Maoist cadre and supporters in a remote jungle in Malkangiri region on the Andhra-Odisha border and the cold-blooded murder of 8 undertrials accused of being members of SIMI in Bhopal.

The two killings are not unrelated, but are part of a pattern. In both cases, it is the police and the security forces who are the proud perpetrators, the very people who are supposed to safeguard the rule of law in the country. In both cases, the victims are poor, from the margins of Indian society, associated with political movements proscribed and vilified by the state. And in both cases, the killings, brutal and blatantly extra-legal, have been lauded by the government of the day.

As part of the massive offensive against people’s movement in the country, conducted in coordination by the central and state governments with an avowed aims to ‘decimate Maoists’, the fascist RSS-BJP government is carrying out bloodbath in the Central and Eastern part of the country. According to several reports, after knowing specific information about the whereabouts of the Maoists, the police raided their camp and opened fire indiscriminately which killed several Maoist cadre and supporters. Many who got injured were shot point blank and unarmed people who were nearby were fired upon by the police. Additional police forces were called and the attack went on for four days. Villagers of Malkangiri are still staging protests, as many villagers have gone ‘missing’ since then. Now it is known that 9 people were caught alive by the police but later killed illegally in the most brutal manner. Bodies of the dead were dealt with most inhumanely and the police is continuing to terrorize the people of the region even right now.

Another malicious script of fake encounter was written in Bhopal by BJP government of Madhya Pradesh. Eight under trial Muslim youths were alleged to have escaped from Bhopal central jail by killing a policeman with spoons and utensils and escaped to Eintkhedi village nearby. According to the police version, the youths attacked the police with country made pistols and finally police was ‘forced’ to gun down eight inmates, which was later contradicted by the MP Anti-Terror Squad officer, Sanjeev Shami who accepted that the eight inmates were unarmed when they were brutally killed. Furthermore, the awful discrepancies in statements of Madhya Pradesh police and the state government raise eyebrows. The slain youths were labelled as ‘dreaded terrorists’ of SIMI to justify the staged cold blooded murder before the people even before the court said so as their guilt was still to be proven.

When the state breaks its own laws

This has been proven beyond doubt that both these killings were fake ‘encounters’. The police claimed that they were fired upon first which forced them to fire in self defence. However it is known that the police fired shots at point blank range and there were no injuries, only deaths as the shots were meant to kill and not to ‘capture alive’. No policeman was injured in these supposed encounters. In the case of Malkangiri, it was claimed that one commando had died of Maoist firing but Andhra Pradesh DGP himself stated that the commando had drowned in a deep pond. Fake encounter mean no arrests so that there is no production in court and no legal defence. The police not only catches the suspects, but also becomes the judge and also the executioner. This is a blatantly illegal act and responsible policemen must be booked under relevant penal sections of the law including 302 IPC (murder) and the SC, ST Prevention of Atrocities Act (in case of Malkangiri) and prosecuted.

As far as Bhopal killings are concerned, we must remember that the eight people killed were accused, not convicts. It is noteworthy that not a single person has been convicted in SIMI cases till date. We know how poor under-trials routinely spend years in prison before being declared innocent by court. In case of the Maoists, there is no trial at all.

Waging a war on the people

While the government accuses the victims of the fake encounters of violence, in reality it itself unleashes violence on the people: physical and systemic. Violence is not only physical/bodily harm as it is also there in routine deaths due to hunger and poverty. Malnutrition is also violence which is caused due to the economic policies of the government. State sponsored violence is worst on the marginalized of the society: Adivasis, Dalits, Muslims and the poorest. According to National Law Commission reports, Indian jails are filled with the poor and have disproportionate number of Dalits, Adivasis and Muslims. Muslims bear the brunt of Islamophobia.

The violence is sharpest on those who dare to dissent and resist like the Maoists.
Maoist movement is a political movement of the poor, not the monstrous ‘terrorists’ that the state makes them out to be (in fact the state acknowledges it to be political when it goes into dialogue or opposition politicians try to piggyback on their popularity among the poor). They struggle against poverty, they fight to protect the jal-jangal-zameen from corporate loot, they take up the question of land ownership, they demand fair price for work and fight for the livelihood, the right to live with dignity and the right to decide our own future. Former PM Manmohan Singh described Naxalism as the ‘biggest internal security threat’ for the country but the truth is that it is a security threat for the oppressive government and the exploitative ruling elite, not the people. The fact that the dead in Malkangiri include poor villagers and the villagers there today are protesting against the police and not against the much maligned Maoists demonstrates this. From their everyday experience, the poor know who are their friends and who are their enemies. You may or may not agree with their politics, but what remains indubitable is that it is a political movement of the poor which demands political engagement and not cold blooded killings.

In this country, we have a long and shameful history of targeting and witch-hunt of minorities. The parliamentary political parties which claim to be ‘secular’ are no different from the openly communal ones because they have always exploited the Muslims for their own vested interests and otherwise have made no efforts to end their oppression and promote their empowerment. On one hand, we see the forced social ghettoization of Muslims, on the other hand we see aggressive assertions of defining the nation as a Hindu Rashtra and projection of Muslims as ‘anti-nationals’. Most easy way of targeting them is branding them as ‘terrorists’. This tag actually takes away the right to life and liberty and makes them easy prey for the state. The propaganda machinery drums up support of common people, distracting them from who their real enemies are.

From the the fake encounters of Sohrabuddin Sheikh and Ishrat Jahan to murders of persons accused of being SIMI members in Telangana last year, these kind of killings have horribly become a routine affair. No legal procedures need to be followed if you call someone terrorist !

Both SIMI and CPI- Maoist have been banned by the government as terrorist organizations. As noted earlier, not a single person has been convicted in any SIMI cases till date.

Banning organisations goes against the spirit of democracy and freedom of the people. It is an attack on fundamental rights of association and free speech and freedom of expression. Crimes against the people should be prosecuted and we have laws for that but political thought and ideology cannot be criminalised. Banning demonises political movements, makes them vulnerable to police harassment and attacks by the state, including killings.

Asking questions is an ‘anti-national’ act?

After the Bhopal killings, Minister of State for Home Affairs Kiren Rijiju stated, “First of all we should stop this habit of raising doubt, questioning the authorities and the police. This is not a good culture.”

Nowadays we see that even asking questions makes you an ‘anti-national’ and absolute compliance is demanded from us. Questioning the authorities is answered with contempt and violence and a culture of silence is being enforced upon us. There are continuous attacks on students and all those who speak up against state terrorism and corporate loot orchestrated by the present government. The ruling classes want to control how you think, how you speak – is that what you want? The people, the students are fighting back. Let us stand with that fight.

DSU condemns both the fake encounters of Malkangiri and Bhopal in strongest possible words. There are no parliamentary parties which would even shed crocodile tears for the martyrs of Malkangiri. The brutality with which they were massacred would not be mentioned by the mainstream media. However, their sacrifices should not go in vain and we should unite to fight against all forms of state terror and oppression and struggle for the cause of a free and democratic society. Modi led fascist RSS-BJP government has sped up both communal frenzies as well as imperialist dictated neo-liberal policies, started by the pernicious Congress party and assisted by several other ruling class parties. The ruling class of the country is getting more exploitative of the people every day resulting in revulsion and agony amongst the masses against them. Consequently, they are increasing fascistic tendencies to overcome their crisis and to facilitate imperialist exploitation. As a result, the government is unleashing an all pervasive attack on various sections of the society, like oppressed nationalities, minorities, Dalits, Women, Adivasis, workers, peasants through massacres and bloodbaths. In this backdrop, DSU calls upon all the genuine democratic forces to forge maximum unity to defeat and crumple the fascists and all anti-people forces.