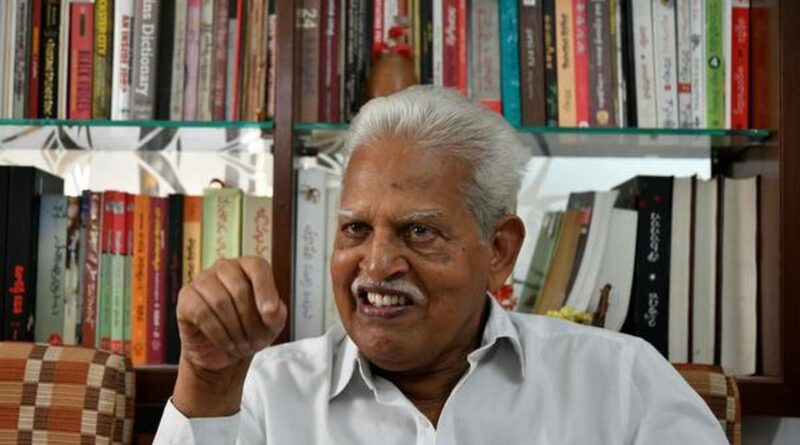 Mumbai, November 12: Political Prisoner Varavara Rao, in jail for over two years in the Koregaon-Bhima case, has been denied bail, the Bombay High Court said on Thursday after his family requested that he be freed urgently because of his worsening health condition.

The court said doctors at Nanavati Hospital could examine him via video call and would visit him if needed. If the doctors believe a visit is necessary, they should visit Taloja jail, where Rao is housed, the court ordered, asking that a report be submitted by November 16.

According to NDTV, the family’s lawyer Indira Jaising argued before the High Court, saying that his health was fast deteriorating. He said, “He is bedridden. He is on diapers. He can’t control urination. He is with a urine bag. His catheter has not been removed. Is this man going to run away from justice?”

Bombay High Court said a video call with doctors at Nanavati Hospital should be arranged today if possible and said the case would be heard again on November 17.

“To assess the present condition of Varavara Rao, it will be appropriate to have a video medical examination. All parties agree that video consultation can be arranged today or tomorrow morning by doctors of Nanavati hospital who made the July 30 report,” said the court.

The bench, comprising justices AK Menon and SP Tavade, also acceded to the request for a hearing after the report was submitted and posted the hearing of the petition of Rao’s wife P Hemlatha on November 17 at 3pm. The bench was hearing a writ petition seeking bail for Rao on health grounds.

The 80-year-old Political Prisoner Varavara Rao was arrested in January 2018 and charged under a stringent anti-terror law, the Unlawful Activities Prevention Act, which allows detention without trial for years.

Varvara Rao has been in Taloja Jail near Mumbai. Co-accused Stan Swamy had called lawyers and informed them that Rao was severely unwell,  Jaising said.

“I am seeking an urgent interim relief to shift Varavara Rao from Taloja jail to Nanavati Hospital. Ultimate relief I am seeking is that he be set at liberty as his rights are being violated,” Jaising told the court.