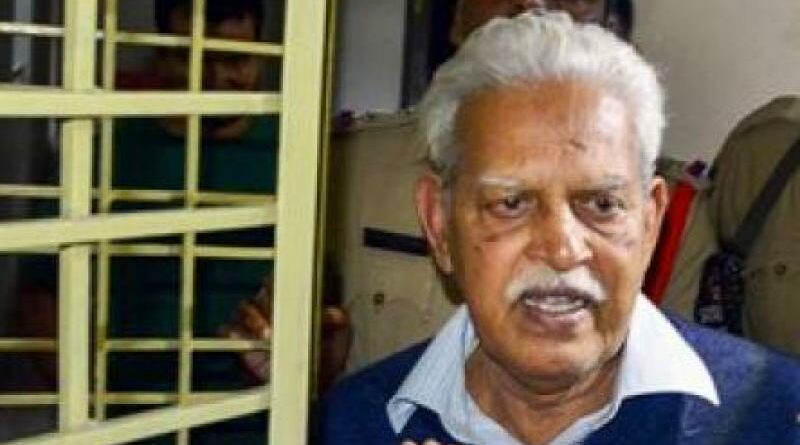 Political Prisoner Varavara Rao, 81, one of the accused arrested by the National Investigation Agency (NIA) in the Elgar Parishad case, was discharged from Nanavati Hospital on Thursday afternoon. Rao was admitted on July 19 after he tested positive for Covid-19. He has been taken back to Taloja jail in Navi Mumbai where he was earlier lodged. Deepak Pandey, inspector general (south region prisons), has confirmed the development.

Rao was first taken to JJ Hospital on May 28 after he fell unconscious, but was discharged on June 1. The family had alleged that Rao was discharged in a hurried manner to obstruct his bail plea.

“June 2 was the date of hearing on his bail application on health grounds in the NIA Special Sessions Court and police argued against his bail showing this hospital “normal” report. The judge accepted that and refused bail on June 26,” read a statement from the family.

Rao continued to show signs of delirium and after voices were raised from various quarters Rao was admitted to JJ Hospital again on July 13. After he tested positive for Covid-19 he was shifted to St George’s Hospital.

The National Human Rights Commission (NHRC) also intervened and issued notices to the Maharashtra government asking it to ensure Rao is taken care of and adequate medical facilities are arranged. It also asked for a report on Rao’s health.

The commission observed that the right to life and medical care is one of the basic human rights and the state is duty bound to provide the same to a prisoner as well.

The state has been directed to constitute a medical board to examine Rao’s health, provide him the best possible treatment and bear the cost for the same.

Rao was then moved to Nanavati hospital for treatment.