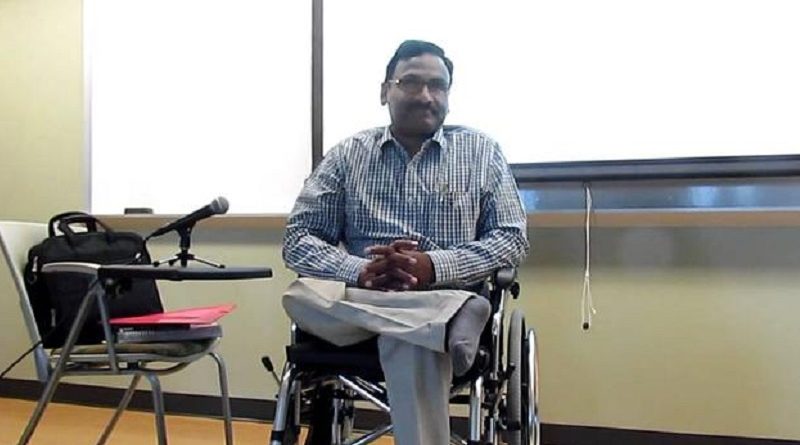 Earlier in the day, the six accused were convicted by the Gadchiroli court for their alleged links with Maoists and their involvement in anti-India activities.

Along with DU professor Saibaba, JNU student Hem Mishra, former journalist Prashant Rahi and three others have been convicted for Maoist links. The Gadchiroli court announced the punishment at 3 pm today. The other three convicts are couriers Mahesh Tirki, Pandu Narote and Vijay Tirki.

The court found Saibaba and five others guilty of waging a war against India. Saibaba was a professor at Delhi University’s Ram Lal Anand College. According to The Indian Express, Judge SS Shinde convicted the accused under sections 13, 18, 20, 38 and 39 of the Unlawful Activities (Prevention) Act.

Earlier, prosecution lawyer Prashant Sathianathan had demanded life imprisonment under section 20 of the Act for the accused. He also that Saibaba shouldn’t get any reprieve, even as he is disabled and wheelchair-bound. The prosecution argued that his handicap didn’t stop him from aiding and abetting activities that claimed several lives.

Saibaba was out on bail since June last year.

Mishra and Rahi were first arrested in August and September 2013 from Aheri and Chhattisgarh respectively, according to police. Saibaba was arrested on May 9, 2014 from his residence in Delhi on the basis of the alleged incriminating material recovered from the two. The police claimed they had recovered documents, hard disks and pen drives.

During the argument in court in November, the prosecution said that the prosecution of the accused was being done as per the rules. “We told the court that the sanction was secured from the state government after submission of documents and material that establish the complicity of the three accused in the activities furthering the cause of the banned organization,” Prashant Sathiyanathan, Special Public Prosecutor, had told The Indian Express.