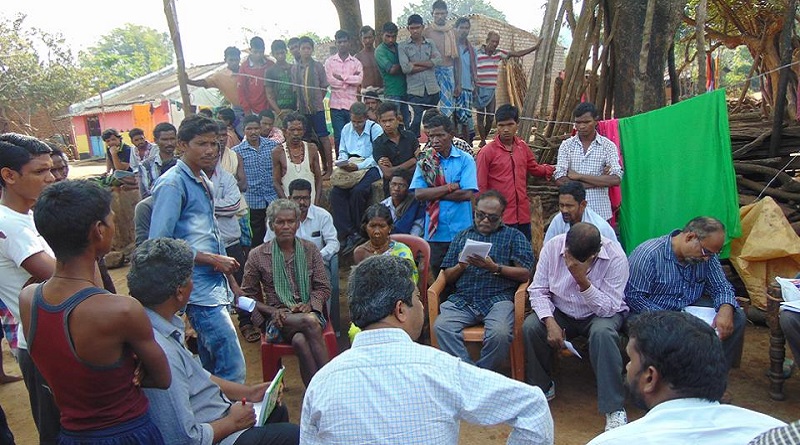 A major “encounter” incident in Andhra Odisha Border (A.O.B.) took place on 24-10-2016 leading to the killing of 18 persons by the Grey Hounds and other security forces in Joint operations conducted by the Odisha and Andhra State Agencies. Again on 25th October, 4 persons were killed and the number of deceased increased to 31 by 27th October 2016.

These 3 incidents attracted national attention and strong responses. Various versions of the media created confusion over the incidents. Since any encounter killing is a major issue of Human Rights violations, the CDRO initiated a fact finding team to enquire into the incidents and bring out the facts and make them public.

The constituent units of CDRO teams from Punjab and Haryana, West Bengal, Odisha, Tamil Nadu, A.P., and Telengana states participated in the fact finding team. The team visited the places of incidents and eight nearby hamlets (villages) on 5th and 6th of November and interacted with the Adivasis and Tribal leaders.

The DGP of Andhra Pradesh has stated through electronic media that on the early morning of 24th October, there was a cross firing between the Maoists and the police security forces, A.P. Greyhounds. The Maoists had gathered there for their plenary meeting and suspected top leadership of the Maoist party might have died. Without disclosing the identity of the deceased, he spread the news on the basis of the kinds of weapons found in the place of incidents like SLRs, AK47s etc. Then there were also 50 kit bags of food at the spot and few escaped. The Rural SP Rahul Sharma said this meant that Maoists had gathered there for military training.

Again on 25th October, 4 more were killed and on 26th October the number of Maoists killed reached a toll of 32. The DGP denied that they were captured and killed. But the nature of the killings is utterly no less than hounding down the Maoists; capturing, torturing and killing them in different places. As per the FIR filed in ChitraKonda P S Crime No. 80/2016 under sections 121, 307, 16 (b) of E S Act, 25 & 27 of Arms and Explosives Act and sections 16b, 18, 18A, 19, 20 of UAPA has been registered.

However the versions of the Adivasis with whom the team interacted give a different versions that is contrary to the official version. The relatives of the deceased in four villages informed the fact finding team that the Maoists called villagers to attend a meeting to discuss their local problems. Some of the family members of the deceased also went along and attended the meeting as is usually the practice of the area.

Father of Sindhe Khillo informed the team that on Sunday he had gone along with his daughter to the market to buy materials. His daughter went to the meeting called by the Maoists along with the grocery items, while he returned back home. The next day morning he heard the sound of firing for few hours along the hill side and worried and waited for his daughter to return.

When she did not return on Monday evening, he went around with the villagers to search for her on Tuesday and went to Malkangiri by the evening. He was handed over the body of his daughter after postmortem that was done without his concurrence. He brought back her body to the village on his own expense spending more than Rs. 10,000.

Picture 3: Crying mothers of Kajuriguda village (Malkangiri dist, Odisha ) in ritual processon for Jayram Khil , a villager who was killed by the Gray Hounds on 24 October.

The police did not oblige to transport the body to his village on their expenses. The body of Sindhe Khilo was found to be pierced by two bullets at both sides of the chest.

The team met the families of Jairam Khilo of Khajuriguda. Their narration was also similar in nature. Jairam Khilo had just been 16 years old and in no way could be branded as a hardcore party activist or a combatant.

Sona Dasya Komulu, aged 32 years, is maried with three children. He had also gone to the meeting along with his family. He told his mother that he would return on Monday night itself. But when the family heard firing sounds in the hillock and found him not returning till next day, they went to Malkangiri to enquire about him.

His body was handed over after identification to the parents after postmortem. That his hand had come out from the shoulders with the bullet injury showed it was due to a close range of firing and torture.

The pattern of bullet injuries on the villagers killed shows a pattern of close range firing and above the hip of the body with intentions to kill and not to apprehend them alive.

The team also met the wife of Lycona Gollari of Khajuraguda who is still missing. His wife Sombia Gollari had approached the Malkangiri police stations looking for him, on hearing the news of Lycona being picked up in a helicopter by the police team. She saw the police pushing out Lycona from a police jeep into the police station. When she wanted him to be released or FIR to be filed or complaint from her taken up, she was informed, slighted, and told not to insist upon it as he was alive and not dead. She told the team about the casual approach of the police on her husband’s disappearance.

The team later met the SP Rural to take down his versions. He denied having clear information of the Maoists meeting except some speculations about their plenary meeting or military training or training camps. But he contradicted the same immediately saying there was concrete prior information of Maoists on the Odisha side and they informed the Odisha Police and offered help from Grey Hounds and A.P. Police.

While he did not want to divulge the strength of force involved in the operations, he informed the team that though Grey Hounds are within the A.P. Police control, they could go beyond the bounds of law in self defence and area of operation in practice. He informed the team that the first firing occurred from the Maoists side and joint forces acted in self defence in retalliation to kill.

When queried about the missing persons or adivasis the S P Rural told us that specific details and complaints are to be filed at the immediate jurisdiction and since the incident came under Malkangiri jurisdiction he does not have any say.

1. The fact finding team observes that the incident of encounter was a serial killing by the police that was coordinated for three days and not in a single incident.

2. We observe that there was a real encounter with the Maoists and it took place on Monday morning near Ramguda. Later on Tuesday and Wednesday in the name of combing operation the joint forces captured, tortured and killed the villagers and injured Maoists without leaving any eye witnesses to the brutal operation.

3. The injuries on the deceased showed that the joint forces attacked the villagers and Maoists with an intention to kill and not apprehend them alive.

4. The bullet on the shoulder, chest, and abdomen indicates the close range of firing as well as the torture inflicted on the injured.

5. The chopping and disfiguring of the faces, heads, and vital organs of the deceased showed the brutality of torture and killing.

6. Various commission reports of the government have clearly pointed out that the Maoists problems cannot be resolved without addressing the socio economic conditions of the people and not as a law and order problem.

7. That the people have to resort to arms to resolve their socio economic problems shows the pathetic state of affairs of the “Democratic Republic”.

1. Judicial enquiry be ordered into the incident by a sitting judge/retired SC judge since it was a joint operation involving two states AP and Odisha with the help of central forces.

2. Criminal cases be filed against those involved in the encounter killings. The investigations should be monitored by the SC.

3. Disbanding of AP Greyhound forces as it is an illegal force operating beyond law and criminal procedure code.

6. The government should pay compensation of minimum of Rs. 10 lakhs to the victim’s families and book cases against the police involved in these killings under SC/ST Atrocities Act.