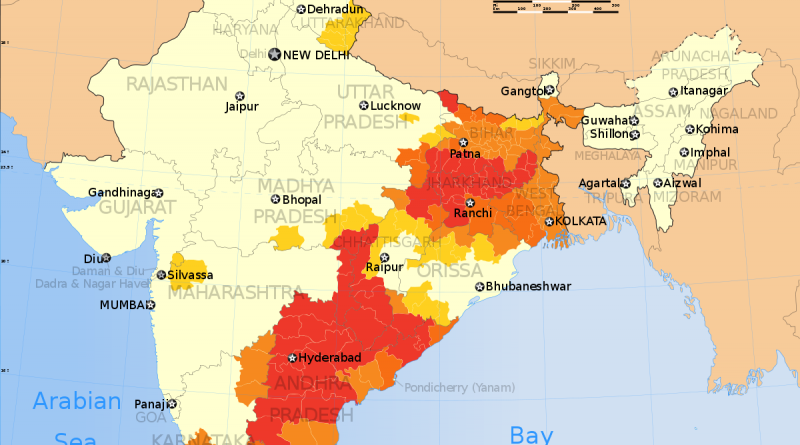 PATNA: The CPI(Maoist) leaders in Bihar are trying to consolidate their cadre base and moving places to meet their supporters.

Central intelligence agencies have alerted the state police on the movement of top Maoist leaders like Vijay Yadav alias Sandeep ji, Nanadlal Yadav alias Nitesh ji, Indal Bhokta and a few others who were spotted at Chakarbandha forests in Gaya district last week.

The security forces have been put on alert due to the unusual gathering of the senior Maoist leaders. The area is close to the Bihar-Jharkhand border.

Police sources said an attempt to consolidate the Maoist cadre could be understood from the fact that there has been decline in violence recently. Only 31 cases of Left-wing extremism (LWE) violence were reported from January to May. Five Maoists were neutralized and 134 were arrested. There was no casualty of security personnel.

In 2016, total 100 cases of LWE violence were reported and 10 Maoists were neutralized besides 468 arrested. Total 13 security personnel, including 10 jawans of Commando Battalion for Resolute Action (CoBRA) were martyred.

“We are yet to intercept any call, but have ground intelligence suggesting that Maoists from Jharkhand and West Bengal have reached Bihar,” sources said, adding Maoist leaders had called a meeting at Sahajpur in Aurangabad district on May 2, but it could not take place due to alert security forces.

“We have information that the Maoists are also approaching people in villages, especially those involved in land dispute through their supporters and sympathizers and promising to solve their cases,” said a source.
Central intelligence agencies have also alerted local police about the Maoists, who have come out on bail and rejoined their groups.
Following alert from intelligence agencies, IG (CRPF, Bihar sector) M S Bhatia had called a high-level meeting on June 9 and asked the officers to strictly follow standard operating procedures (SOP) during anti-Maoist operations in forest areas.
“New strategy to conduct pointed strike on Maoist cadres and leaders after gathering concrete input was also discussed,” said a source. At present, three battalions of SSB and seven battalions of CRPF are engaged in anti-Maoist operations in the state.
IG (operation) Kundan Krishnan told TOI that Muzaffarpur, Banka, Jamui, Nawada, Aurangabad and Gaya are the districts where maximum cases of Maoist violence have taken place in the past. “These six districts are among the 35 districts identified by the central government from where more than 80% cases of LWE violence were reported in the last couple of years,” he said, adding that efforts were on to make Muzaffarpur, Nawada and Banka free from Maoist violence in the next two years.