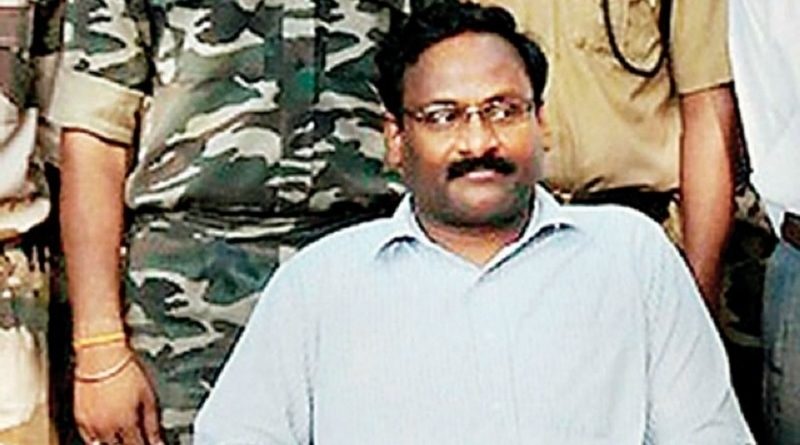 Condemn the conviction of Professor GN Saibaba and five others in India!
Condemn the travesty of justice and stifling of voices of democratic dissent!
Repeal all draconian laws such as UAPA! Release all political prisoners!

The life sentence given on 7th March 2017 to Delhi University Professor G N Saibaba by the Gadchiroli District and Sessions Court in Maharashtra State of India is shockingly unjust. The court has convicted him and five others under the draconian anti-terror law, the Unlawful Activities Prevention Act (UAPA). Besides Saibaba, the five people convicted are journalist and social activist Prashant Rahi, Jawaharlal Nehru University student Hem Mishra and tribals Pandu Narote, Mahesh Tirki and Vijay Tirki. (While five have been sentenced to life term in prison, the court sentenced Vijay Tirki to 10 years in jail).

It is clear that these sentences have been concocted to instil extreme fear in all voices of democratic dissent against the Brahmanical upper-caste Hindutva BJP government in India. Although the court says the case against these people have been ‘proved beyond reasonable doubt’, there is barely any evidence against them according to the defence lawyer. It may be recalled that police had illegally raided Dr Saibaba’s house on two occasions in 2013 and seized his computer hard drives without being sealed (as required by police procedure),  which they subsequently presented in court as evidence. The hard drives could easily have been tampered with, whilst in police possession. Later in April 2014 the Maharashtra police kidnapped the wheelchair-bound professor from Delhi, and charged him under various sections of the UAPA, accusing him of waging war against the Indian State. Saibaba was granted unconditional bail in April, 2016 by the Supreme Court, which had cited his medical condition – he suffers from 90% orthopedically disability – and the fact that all material witnesses in the trial had been examined.

During the two years he spent as an under-trial in Nagpur Central Jail, Saibaba was denied medical treatment and assistance, due to which his health rapidly deteriorated. Following his bail last year, Saibaba was being treated for cardiac problems, stones in his gall bladder, pancreatitis and high blood pressure. He was also undergoing physiotherapy for various orthopaedic conditions that he had developed in his back and shoulder whilst in prison. In fact he had been admitted to the ICU at a Delhi hospital and was discharged only on 28th February 2017. He was preparing to undergo a surgery for removal of his gall bladder, which was scheduled to happen within a month before he travelled to Gadchiroli on 6th March to attend the reading of the final order of his case at the Sessions Court. Saibaba was given the impression that he would just have to present himself in court for two hours and assumed that he will acquitted. Instead, Saibaba was taken into custody immediately on his arrival at the court and later sentenced to life in prison. His defence lawyer’s request, based on his orthopaedic and other ailments, to pass an additional order to provide Saibaba with assistants and vital medical treatment in jail was out-rightly refused by the sessions judge.

Professor Saibaba has consistently stood for the rights of the landless peasants, Adivasi (indigenous) people, Dalits, working class and other oppressed and downtrodden sections of the India society. The Professor has been, and remains, vocal against the corporate loot in the central and eastern states of India, where the Adivasis are defending their waters, forests and land from being taken over by the greedy mining corporations. He has relentlessly denounced the deployment of more than 100,000 paramilitary forces by the government, in various forms such as the Operation Green Hunt and the state-sponsored vigilante groups such as Salwa Judum. It is this bold voice of Professor Saibaba, and his fellow accused, which the Indian state wants to stifle. The current judgment of the district and sessions court is a testimony of how readily the courts in India are prepared to bow down to the pressures of the police state.

We condemn the sentences given to Professor Saibaba, Prashant Rahi, Hem Mishra, Pandu Narote, Mahesh Tirki and Vijay Tirki.  We demand all are given bail, a fair trial, and that the wheelchair bound Professor Saibaba is treated in a humane manner, in accordance with UN Convention on the Rights of Persons with Disabilities.