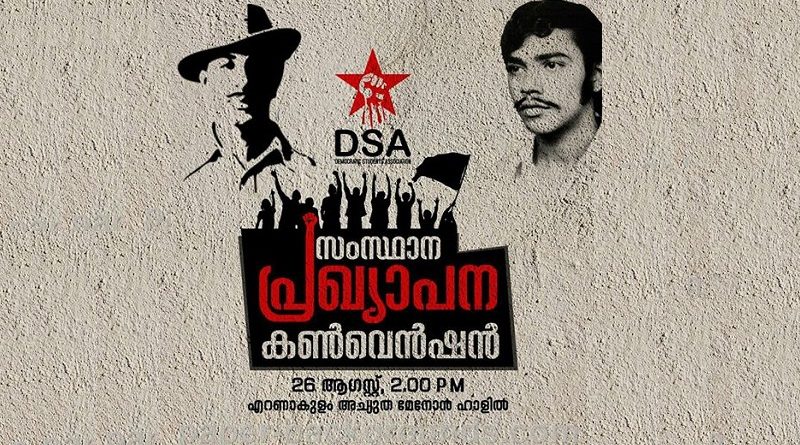 DSA will be launched in Kochi on August 26

The Democratic Students’ Association (DSA), a pro-Left outfit to be launched on August 26 in Kochi, could be a Maoist frontal organisation, suspects the intelligence wing of the State police. The association’s members, however, call it “an independent group upholding scientific socialism.”

According to a leaflet brought out by the organisers of the inaugural event, the outfit intends to “support the struggles by the oppressed sections of society”. They find fault with the Students Federation of India, for promoting “apolitical politics,” while sabotaging students’ union elections and silencing dissent by coercion.

They claim that the Kerala Students Union too is insignificant and communal organisations are gaining ground across campuses.

The police, however, suspect that it is another attempt by those propagating Maoist ideology to “influence the hearts and minds of youngsters.” A senior official in charge of internal security in the office of the State Special Branch in Thiruvananthapuram told The Hindu on Sunday that Maoist sympathisers were “trying to capture different spheres of our lives through frontal organisations in various fields.” He pointed out that Paadaantharam, under the auspices of which the DSA was being launched, was the students’ outfit of Porattam, which has links with the Maoists. “They have a cultural wing called Njattuvela. Though the DSA cannot be called a Maoist organisation, their hidden agenda is to propagate that ideology,” the official said. The police are keeping an eye on their activities, he said, pointing out that Ami, an organiser of the DSA, is the daughter of Rupesh and Shyna, who are in jail on charge of suspected links with Maoists.

Ms. Ami refuted the allegations, asking if the state calls aligning with the struggles of the oppressed sections “a Maoist activity.” “It is undemocratic to link us with Maoists just because my parents are Rupesh and Shyna. I have my own political views,” she said. Ms. Ami said the DSA was an independent students’ organisation not affiliated to any party. By branding them Maoists, the establishment was trying to suppress political movements not linked to mainstream parties.

Swathi, a student activist, who was arrested by the police for taking part in the protest against the Neduvasal hydrocarbon project in Tamil Nadu, will inaugurate the organisation.