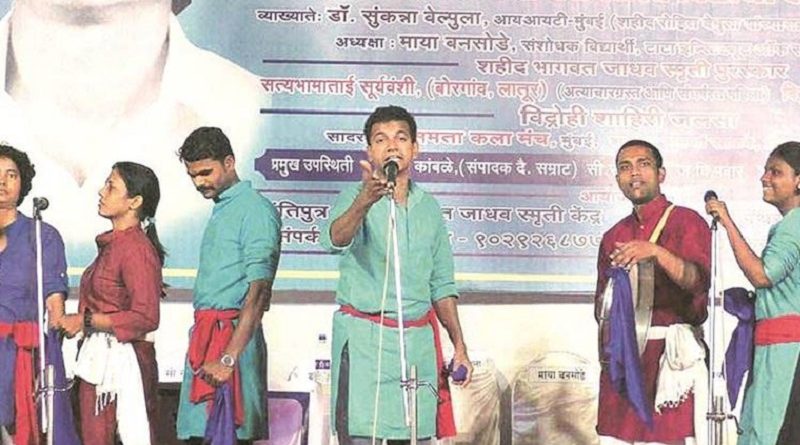 However, Sachin and his wife Sheetal Sathe, once lead singers of KKM, have left the group due to “differences”. On the other hand, Sagar and Ramesh, who have composed about 120 songs and 70 poems in jail, are prepared to hit the streets with KKM artistes.

“We are followers of Dr Babasaheb Ambedkar… we can’t remain silent spectators to the serious problems we see in society. We will resist… KKM will fill up the cultural vacuum in progressive movements and work for the annihilation of caste and gender inequality…,” said Sagar.

He claimed that his family, which lived in Kasewadi slums in Bhavani Peth, had to shift to Samata Nagar in Thergaon because of “police harassment”. Because of the police case against him, Sagar said he had to drop out when he was pursuing his final year of BA, Sociology.

A resident of Yerawada, Ramesh did his M Com from from Wadia College and then worked at a college on Alandi Road for about a year, before he was booked by the ATS. “I joined KKM during my college days, as it gave me a stage to use my art to express dissent against the wrong practices in society. We never committed any violence. But police tried to suppress our voice by framing us in a false case. But we did not surrender our art. We continued to protest by composing songs and poems on incidents that left us shaken, like the murders of Dr Narendra Dabholkar, Govind Pansare and M M Kalburgi, which we read about in newspapers, when we were in jail… While we were falsely branded as Maoists, in jail, the authorities asked us to perform on Republic Day…,” said Ramesh.

According to the ATS, the KKM artists were accused of working as per the instructions of Angela Sontakke and her husband Milind Teltumbe, “leaders” of the banned CPI- Maoist. The ATS claimed that Angela and Milind allegedly penetrated the KKM and indoctrinated the accused artistes towards Maoist ideology.

The ATS had arrested Angela, along with Sushma Ramteke, Anuradha Sonule, Mayuri Bhagat, all three from Chandrapur, Jyoti Chorge of Pune, Siddhartha Bhosale and Deepak Dhengle, both KKM artists from Pune, in April-May 2011, under the stringent UAPA.

The ATS had also booked eight others, including Milind, Jyoti and KKM artists Sheetal, Sachin, Ramesh, Sagar, Prashant Kamble and Santosh Shelar under the UAPA.

However, Sagar and Ramesh have denied any links with Angela or Milind. “We saw Angela for the first time in court… we had never seen her before,” said Sagar. Sachin, Sheetal, Ramesh and Sagar were arrested after they “surrendered” in 2013 by staging a ‘satyagraha’ in Mumbai. Sheetal, who was pregnant at the time, was granted bail.

In its chargesheet, the ATS alleged that they had participated in arms trainings with about 150 Naxals in jungle areas of Gadchiroli, between November 2011 and April 2012, while they were on the run.

The ATS also submitted statements of three surrendered Naxals, who allegedly identified the KKM artistes as active members of the CPI- Maoist. While the Bombay High Court initially rejected the bail pleas of Sachin, Sagar and Ramesh, the Supreme Court later granted bail to all three. The apex court also granted bail to Angela in May 2016.

KKM: The split within & ‘suspicious’ links

Pune: KKM was launched by Pune-based artist Amarnath Chandaliya in 2002, in the wake of the Gujarat riots, to “spread communal harmony”. However, Chandaliya left the group due to differences with other members. He later gave a statement to the ATS, revealing alleged suspicious activities involving KKM artists.

Now, singers Sheetal Sathe and Sachin Mali have announced they are no longer part of KKM and are going to start their own cultural front soon. Sheetal performed at a “Vidrohi Shahiri Jalsa” led by noted artiste Sambhaji Bhagat in Pune on Saturday. Asked about the split in KKM, Ramesh said, “Differences do happen in social movements. It is important to continue the movement even if someone leaves.”

Meanwhile, in an issue of Vidrohi magazine which focussed on Rohith Vemula, its editor Sudhir Dhawale wrote, in an article dated April 14, 2016, that Sachin and Sheetal have left KKM. Dhawale slammed the couple for taking an open stand against KKM and Republican Panthers (RP), an outfit he had started in 2007 to fight caste atrocities. The couple was earlier part of the editorial team of Vidrohi.

Dhawale, who has launched the “Radical Ambedkar” movement, has a history of legal battle. Arrested by the police on sedition charges in January 2011, he was acquitted of all charges in May 2014. On January 10, KKM artists performed in Mazgaon, Mumbai, at a programme organised by Dhawale’s group RP, to mark the 43rd “martyrdom day” of Dalit leader Bhagwat Jadhav. Investigators claim that links between KKM and Dhawale are suspicious. They say KKM founder Chandaliya’s statement mentions that Dhawale had allegedly introduced him to Maoist leaders Anuradha Ghandy, Vijay (Sridhar Srinivasan) and Sadhana (Angela).

On September 2, 2016, Dhawale was seen at the helm of a programme in Mumbai, to mark the first death anniversary of Maoist leader Sridhar Srinivasan. While RP singers performed protest songs, Dhawale released the book “S Sridhar – Portrait of the revolutionary as a warrior- intellectual” during this event.

However, Sagar, a member of KKM, said, “KKM and RP are different groups. We did come together on some occasions, but we work separately”. ENS