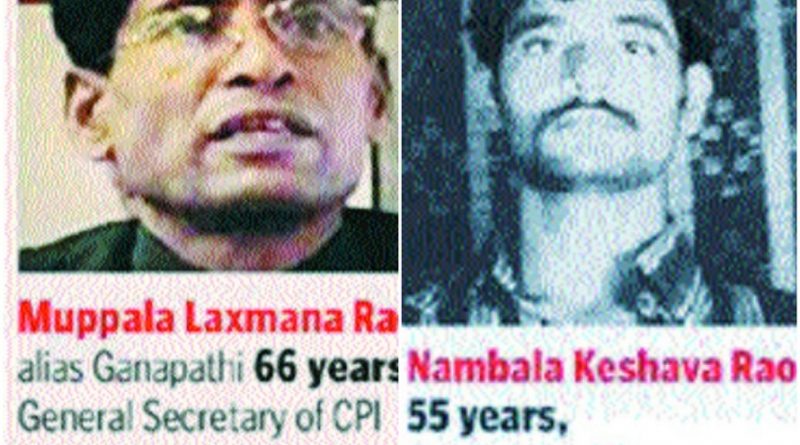 Hyderabad: One of the chief architects of the Indian revolutionary movement, Muppala Laxmana Rao, more popular with his nom de guerre Ganapathy, has stepped down as the general secretary of the CPI (Maoist), paving the way for the younger leadership to take the reins of the most secretive organisation that continues to wage a relentless protracted armed struggle based on the Marxist-Leninist-Maoist ideology.

The 71-year-old Ganapathy, reliable sources say, is replaced by Namballa Keshava Rao, aka Baswaraj, aged about 63 years. Incidentally, both the leaders hail from the Telugu States. While Lakshmana Rao is from Beerpur village of Jagitial district in Telangana, Keshava Rao is from Jiyannapet village of Srikakulam district in Andhra Pradesh.

The change of guard has been anticipated ever since the Maoist party’s Central Committee meeting held in February 2017, passed a resolution on ‘veteran comrades’ asking senior leadership to voluntarily step down from their responsibilities because of their age. The central committee resolution spoke about forming special squads to protect these veteran leaders and in case it is difficult to provide security to them in forest areas, they should be moved to towns of cities with ‘due protection’.

The confirmation of Keshava Rao taking over as general secretary of the CPI (Maoist) was confirmed by a senior naxalite leader who surrendered himself with an AK-47 in Chhattisgarh recently, officials monitoring the naxalite movement in the country disclosed to this correspondent. The change in guard is meant to infuse a fresh lease of life into the fighting capabilities of the Maoist party, which has been in the ‘setback’ stage all over the country. Several Maoist documents point to the party’s failure in attracting youth and the leaders’ inability to spread the movement to urban areas.

Namballa Keshava Rao, was heading the Central Military Commission (CMC) and is known to be an expert in fieldcraft, use of explosives and military tactics. He had been underground for the last 28 years and had graduated from the Regional Engineering College (REC), in Warangal, which is now rechristened National Institute of Technology (NIT). He was known to have been arrested in Srikakulam only once after a clash between members of the Radical Students Union (RSU), then a student’s wing of the CPI-ML People’s War (PW) and the Rasthriya Swayamsevak Sangh (RSS) on January 21, 1980. Eversince, he has managed to escape the police dragnet several times.

With his technical background and solid knowledge of military tactics, the revolutionary movement is bound to witness changes. The recent killing of Kidari Sarveshwar Rao, a Telugu Desam Party legislator from Araku Assembly segment in Andhra Pradesh and a former legislator S Soma in last week of September indicates the change in tactics of the Maoist party. Despite the revolutionary party suffering serveral set backs in AP and its neighbouring States of Odisha, Chhattisgarh, Maoist rebels carried out a daring attack on the Araku legislator on September 23, 2018.

The last time, the Maoist party carried out such a deadly attack on an elected representative was on the Independence Day in 2005, when a Maoist action team shot dead Congress legislator Chittem Narsi Reddy and eight others in Narayanpet town of Mahabubnagar district. The current attack on the MLA in Andhra Pradesh, the series of ambushes being carried out in Chhattisgarh and increased armed actions in Odisha point to the change in tactics after Keshava Rao took over, sources felt. Keshava Rao had extensively worked in the Andhra-Odisha Border and Dandakaranya areas and is stated to be extremely strong in his committment to the ideology.

His predecessor, Laxmana Rao, is known more to be ideologically strong than in the military tactics. Laxmana Rao had worked as a teacher in Eligedu village of Karimnagar district and had been with Kondapalli Seetharamaiah (KS) who founded the CPI-ML People’s War (PW). He commanded the Peddapally dalam and later worked as the District Committee secretary of Karimnagar and was later elected to the Andhra Pradesh State Committee, Central Organising Committee.

Following an ideological split, Kondapally Seetharamaiah was ousted from the post and Laxmana Rao took over the reins of the People’s War. His biggest contribution to the naxalite movement is the reunification of the naxalite groups, thus forming a unified party named CPI (Maoist), which spearheaded such an intense and violent movement that former Prime Minister Manmohan Singh termed it as biggest threat to internal security of India.