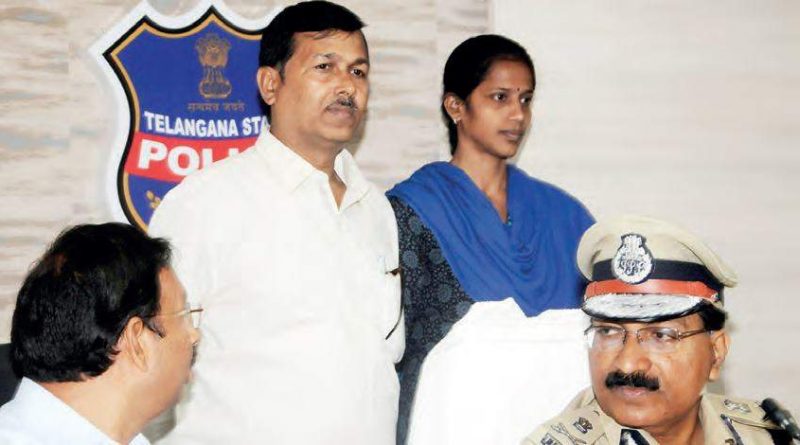 Down with the shameful betrayal and surrender of Jinugu Narasinha Reddy!

The revolution will surge forward sweeping aside all kinds of much on its path!

Jinugu Narasimha Reddy(Jhampanna, Rajesh), a member of the Central Committee(CC) of our party, has surrendered before the enemy. He had already lost confidence in the invincibility of the proletarian ideology, the Maoist party, the Protracted Peopleʹs War, the revolutionary movement and the oppressed masses. Unable to face the new and difficult conditions of class struggle brought by objectives changes and the enemyʹs intensifying all-round offensive, he chose the most selfish, heinous and cowardly path of desertion and shamelessly knelt down before the enemy. This is an outright betrayal of the Indian proletariat, its vanguard Party, the Indian revolution and the heroic struggle of the countryʹs toiling masses. It is an affront on the sacrifice of thousands of revolutionary martyrs who have selflessly laid down their lives fighting the same class enemy whom Rajesh has now so shamelessly embraced. With this, his three decades of political life in the revolutionary movement has come to an ignominious end. Our CC condemns his betrayal in strongest terms and appeals to the rank and file of Party, the entire revolutionary camp, the vast struggling masses and the friends of the Indian revolution to reject outright such renegades and their abominable path of surrender. Undeterred by the degeneration and fall of Narasimha Reddy, our CC firmly and unambiguously renews its pledge to resolutely carry forward the great red banner of class struggle in pursuance of our Partyʹs immediate and ultimate aims.

Narasimha Reddy had joined the movement in the early 1980s, when he was working in factory as a technician in Hyderabad city. He later became a professional revolutionary and was sent by the Party to work as a guerilla squad member in Eturunagaram forest area of Warangal district. Subsequently, he developed to a squad commander, Area committee Member, District Committee member and District Committee Secretary in the period between 1986 and 1995. North Telangana Special Zonal Committee(NTSZC) was formed in 1995 with a plan to develop the guerilla war to a higher level in that zone. He was elected to the NTSZC in its first conference held that year. In 2000, he became the Secretary of NTSZC and continued to work in this capacity till 2007. He was elected to the CC in 2001 and worked as a CCM in North Telangana between 2001 and 2007. He was co-opted to CMC in 2007 and worked in North Telangana and some other parts of the Central Region. He was transferred to Odisha in 2011 where he continued to work till the end of 2016. For the last one year he was deeply submerged in ideological and political vacillation and finally informed the concerned CCM’s in November 2017 about his decision to surrender.

It is true that Narsimha Reddy had participated in the revolutionary movement for a relatively long period of over three decades and developed politically to become a member of its highest leading committee, the CC, contributing to the movement in the process. But at the same time, he also had several serious weaknesses, limitations and non-proletarian trends like individualism, bureaucracy and false prestige that continued throughout his political life.

Comrades who worked with him in the guerilla squad and the Party committees or the leadership comrades continuously struggled against these negative aspects of his all this time. The concerned committees put efforts at every step to rectify him and he too accepted many of the  criticism in one way or another. But his weaknesses, mistakes and limitations had persisted. Particularly in the last few years, these negative aspects got magnified and finally became dominant under the present difficult condition of the Party and the movement. The terror of the enemy had so overtaken him that he could no longer fulfill the tasks given to him by Party. He refused to attend important meetings with the excuse of probable enemy attacks even though other comrades in a similar situation shared such unfounded apprehension. Apart from comrades in highest committees, his protection comrades too criticized his panicky behaviour and defeatism. The prevailing conditions and enemyʹs serious offensive demand that the leadership comrades of the Party at the high level remain firm and confident in the battlefield and courageously safeguard themselves as an inseparable part of safeguarding the Party, PLGA and the movement.

This has to be done in all spheres of revolutionary work including in the military sphere. But as a CCM, Narasimha Reddy failed to live up to the higher level of responsibilities and tasks given him by the Party displaying heightened political consciousness, preparedness, courage, discipline, selfless sacrifice, self-critical attitude and other leadership qualities.

Our CC reviewed Narasimha Reddyʹs work in view of his persistent weakness and limitations that had reached a serious level. The CC concluded that he was seriously bogged down by subjectivism, resulting in his overestimation of the enemy and underestimation of the revolutionary movement and the people. He had lost his bearing and sense of proportion, became incapable of analyzing the objective situation as a member of the Partyʹs leading committee, repeatedly followed wrong organizational method and utterly failed to fulfill important responsibilities he was entrusted with. This was in addition to his long-standing weakness of imposing his subjective and individualistic thinking on Party committees. It had become a habit for him to bring up disputes and illogical debates on individual problems in a sectarian and arbitrary way, violating democratic centralism and proletarian discipline. Sometimes he created deadlock in the functioning of the concerned Party committee and threatened to boycott some meetings when criticized by other comrades. Due to his anti-organizational  behaviour and functioning, he gradually lost the confidence of his comrades and became isolated. All these wrong traits were criticized by the comrades of the concerned Party committees on several occasions with the aim of helping him rectify his mistakes and weaknesses on the basis of unity-struggle-unity. But he failed to recognize the gravity of his negative aspects, stubbornly refused to take a self-critical attitude, failed to remould his world outlook in the light of Marxism-Leninism-Maoism. This not only led to his downfall but also caused much damage to the Party.

Taking all this into consideration, our CC decided to suspend Narasimha Reddy from the CC for two years earlier this year with hope that he would acknowledge his mistakes and weaknesses and seriously put efforts to rectify with the help of his comrades. However, he neither accepted this decision positively nor did he undertake any self-criticism at all. He also refused to take up responsibility of a State Committee Member the CC had assigned him. Overcome by petty-bourgeois false prestige and selfish narrow-mindedness, he refused to submit to the Partyʹs decision, declined to struggle against the non-proletarian traits present in him and failed to remould himself into a thoroughgoing communist revolutionary. Rather than humbly serving the revolution and the people with bowed head, he deemed it better to surrender and survive as a dirty creature at the service of enemy. In this way, the transformation of a revolutionary into an unrepentant and diehard betrayer and scoundrel was complete. Whenever CC had taken the suspension decision on him, he had raised the political differences with party line. He was discussed that “Now India is not semi feudal – semi colonial country, it is transformed into capitalist country”. Thus our party line should change according to conditions and party would take insurrection line in Indian latest conditions. These political differences are nothing but, cover up his degeneration.

All revolutions pass through twists turns, ups and downs and difficult situations. It is only by boldly tiding over such challenges that a proletarian party gets steeled and acquires the capability to lead the revolution to victory. In periods like this, it becomes all the more necessary for all communists – particularly those who join the Communist Party from non-proletarian classes – to deepen their ideological and political understanding, to remould themselves by adopting the proletarian world outlook and to firmly stick to it. They need to more resolutely apply the principle democratic centralism, abide by the iron discipline of the Party, more closely integrate with the comrades and the people, learn from practices, rectify their mistakes, fight self, serve the people selflessly and stand at forefront of struggle so as to remain a committed revolutionary till the very end. But there are always those who fail in such testing times. History shows that it is quite common for a handful of individuals who do not remould themselves and who are not prepared for sacrifice to distance themselves from the movement at such crucial junctures, giving foremost priority to their own survival. They desert the revolutionary camp and at times become counter-revolutionaries serving the enemy. Narasimha Reddy presents a glaring negative example of a revolutionary who stopped integrating with the cadres and the masses, stopped struggling against his weaknesses and became overawed by the enemy. Panic-stricken, they pathetically prostrate before the class enemy and thereby end their usefulness for the people with their own hands. The revolution will discard such people as waste material and throw them out from time to time in the process of class struggle.

It should not be surprising if such despicable individuals start singing in the tune of the enemy and cast aspersions on the Party, its leadership, the revolutionary movement and the future of the Indian revolution. Propped up by the enemy, they may appear before the people in new avatars as (pseudo) ʹintellectualsʹ, ʹjournalistsʹ, ʹsocial workersʹ, etc. with sole aim of harming the Party and the revolution. Our comrades, friends and well-wishers of the Indian revolution should remain alert to such eventualities and give befitting response to them. Knowing them to be a part of the enemyʹs Goebbelsian propoganda machine, the class-conscious toiling masses should throw the claptrap of such traitors into the scrapheap.

The desertion, betrayal and the treachery of a few renegades in the pay-role of the reactionary ruling classes can never stop the revolution! They may only create some temporary hurdles and inflict some temporary damage, but the revolution will sweep all such pests into their graves and surge forward towards its goal. Led by the proletarian revolutionaries and inspired by the heroic martyrs, millions upon millions of the oppressed masses of the country will throw them away along with their masters into the dustbin of history and achieve final victory.