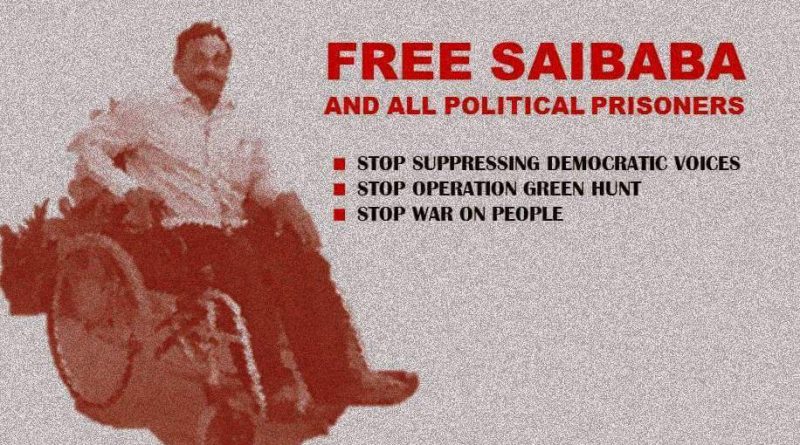 Saibaba, an English lecturer at Ramlal College, New Delhi, was arrested by the Maharashtra Police on May 9, 2014, for his alleged association with Maoist groups. He was then sentenced to life imprisonment by the Gadhchiroli Sessions Court in Maharashtra on March 7, 2017, under the Unlawful Activities Prevention Act (UAPA) for “waging war against the country and supporting the ideology of a banned organization”.

It is also to be noted that Saibaba was granted bail in April, 2016 after the Supreme Court cited his medical condition as he suffers from 90% disability due to being affected by polio as a child.

Nair has approached the UNHRC, with a letter requesting the release of Saibaba on parole due to his deteriorating health conditions in the Nagpur Central Jail, where he is currently being held. In the letter, Nair asks the Government of India to release Saibaba on parole or move him to a prison that is closer to his family and provides better medical facilities.

During his solitary confinement in Nagpur Jail, Saibaba also wrote a letter to his wife, Vasantha, as posted by The Citizen, regarding his concerns about his health. “I am living here like an animal taking its last breaths.”, he wrote. “Somehow 8 months I managed to survive. But I am not going to survive in the coming winter. I am sure. It is of no use to write about my health any longer.”, he had added.

“In any case, please finalize the senior counsel by or before the end of this month. Then inform Mr. Gadling to file my bail application in the first week of November or last week of October itself. You remember if this is not done in this way, my situation will be out of hands. I am not responsible. I am making clear to you. Hereafter I am not going to write about it any longer.

You should talk to Mrs Rebeccaji and Nandita Narain. You also talk to Prof. Haragopal and others. Explain the entire situation. You need to hurry up.

I am feeling so depressed for requesting you all so many times like a beggar, a destitute. But none of you are moving an inch, no one understand my present condition. No one understands 90% disabled person is behind bars struggling with one hand in condition and suffering with multiple ailments. And no one cares for my life. This is simply criminal negligence, a callous attitude.”, he said in the letter.

In his letter to the UNHRDC, Nair mentioned the mistreatment of the academician, and being subjected to various forms of inhumane treatment in the jails. According to the letter, Saibaba requires constant medical care such as physiotherapy, occupational therapy and hydrotherapy in order for his condition to stop deteriorating. He has also formed multiple stones in his gallbladder and requires immediate surgery.”

The negligence caused in the part of the jail in taking care of Saibaba led Nair to move the Special Rapporteur of UNHRDC to take the matter into consideration. Nair also wrote that the professor might die if the UN did not intervene and asked them to start the discussion regarding his health with the Indian Government immediately.

On April 2, his wife, Vasantha Saibaba was allegedly refused entry and was also manhandled by the women police. She filed an application along with an affidavit for accompanying her husband to the hospital. Talking about this incident in his letter, Nair mentioned that Saibaba’s condition required constant family support which was clearly denied.

He was denied basic medical care and was also manhandled him in his wheelchair causing him to fall and break his bones. Writing to the UNHRDC, Nair writes that the Indian Government has been violating the UN basic principles for the Treatment of Prisoners with Saibaba’s imprisonment.

The UN Resolution 70/175 states that there shall be no discrimination of prisoners on the grounds of political status and that all prisoners shall have access to the health services available in the country without discrimination.

Nair requests Puras to look into the matter and moveDr. Saibaba from Nagpur Central Jail to Cherlapalli Central Prison, Hyderabad where he can be closer to his family and get medical and moral support from them.

“Thank you for your urgent consideration in the matter.”, he ends.

The treatment of Dr. Saibaba in Nagpur Central Jail leaves a lot of questions to be answered. It also leaves a lot to think about the Government’s decision to keep a man, who is 90% disabled, in jail and deny him justice.