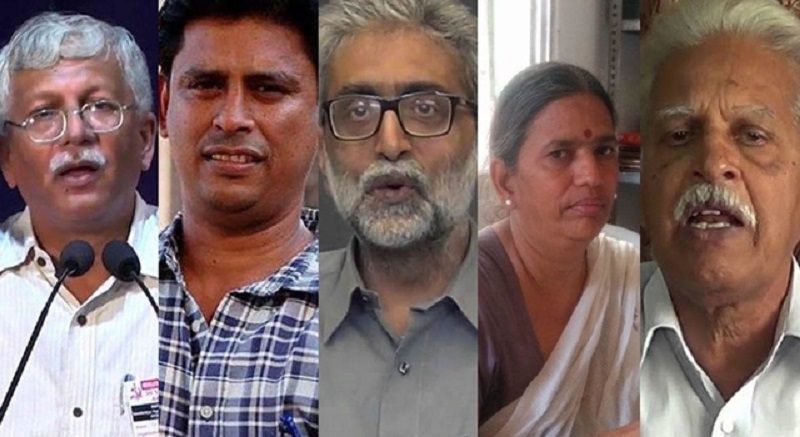 The Pune police have started arresting intellectuals from all over the country from 6th June 2018 in the name of Bhima koregaon conspiracy case. Sudhir Dawle, Rona  wilson, Surendra Gadling, shoma Senand Mahesh Raut were arrested. In the second round of arrests on 28th August Varavara Rao, Vernon Gonzalves, Arun Ferriera, Gautam Navalakha and Sudha Bhardwaj were picked up from their houses implicating them too, in the above conspiracy case. The police also raided the houses of Prof. Anand Teltumbde (in  Goa), Pror. K.Satyanarayana, Journalists  Kranthi and Kurmanath (in Hydeabad) and Father Stan Swamy (in Ranch).

The Pune police and the Maharashtra Govemment have left the original perpetuators over violence (Shambhaji Bhide, whom Narendra Modi calls as his Guruji and Milind Egbote) in Bhima Koregaon on 01 January 2018, untouched and they are Free.

The police had started ﬂoating conspiracy theories through their pliant media, from June itself saying that they have recovered incriminating letters from the laptops of Rona Wilson and others and that all of them have participated in a conspiracy along with the Maoists to assassinate the Prime Minister, Narendra Modi and wage war against the Indian state.

Many well-meaning intellectuals and even some of the retired police ofﬁcials  and Judges also exposed the concocted nature of the letters and analysed how they can only be fabricated letters. They exposed how in the “modus operandiʹ or our party, an underground party, there is no scope for the usage of any such letters/mails and more so the usage of original names for any military operations or logistic operations. Therefore the framing of some of the above intellectuals in connection with a concocted plot to kill Narendra Modi is one of the biggest frauds thrust upon the people of lndia. Attempts are made to silence the sane and dissent voices by killing people like Dabholkar, Pansare, Kalburgi, Gauri Lankesh and by making attempt on the life of Omar Khalid or by arresting activists like GN Sai Baba and others. Murugan, Chandrasekhar Azad Ravan and the present round of arrests and slapping UAPA and sedition acts on them… In fact, this is the real conspiracy by the state. Any critical observant of our movement will notice that it is our underground guerilla forces which are involved in military operations. There cannot be any role for activists like those who have been arrested.

All the intellectuals, right from Dr. Vinayak Sen and Sony Sori to Saibaba and  Varavara Rao, Sudha Bharadwaj and others are democratic rights activists and  revolutionary intellectuals who have dedicated their lives to defend the rights of the downtrodden- Daliths, Adivasis. Minorities, Women, Workers, peasants- and their right to organise and agitate for their rights. it is this activism that the current fascist regime of Modi and shah wants to curb.

The fascist regime of Modi – Amith Shah-BJP/RSS is actually facing a serious  crisis of credibility and economic, political and social crises. The poll promises of  Modi of eradicating corruption, unemployment, doubling the income of farmers etc have fallen flat. Their favoritism, crony capitalism and the corruption involving Ambanis, Adanis, Modis, Mallyas eto stand exposed. Demonetisation, GST and other pro-imperialist policies have had devastating effect on the lndian economy and have resulted in the closure of small and medium scale industries and in huge unemployment. The attacks of Hindutva vigilante gangs on Daliths, Adivasis and women and progressive intellectuals like Dabholkar, Gauri Lankesh and others are giving rise to a new polarization and consolidation against these fascist forces.

-To prevent the emerging unity of Daliths , Minorities and the revolutionary movement as was being witnessed in the Bhima Koregaon program and the call “Nayee peeshvaayi – Nahee chalegi”

– To divert the attention of the people from the real issues of crony capitalism, corruption, unemployment, sky rocketing fuel and other commoditiesʹ prices by creating the bogey of urban Naxallsm apart from pseudo patriotism, Pakisthan bashing etc,

– To further intensify the Green Hunt Operation launched by the Congress regime and wants to resort to aerial bombings, further deployment of military and para military forces in Dandakaranya , Jharkhand and Odisha. The massacres and cruel  repression on the Adivasis is going to intensify many fold .The state wants to preempt any solidarity movement out side these areas. The arrested activists are among those who are in the forefront of exposing the cruel repression and the onslaught.

-By raising the bogey of urban Naxalism and branding every peoplesʹ movement against corporate forces, anti-people policies of the government as being Naxal inspired and backed that state wants to suppress every movement. We have witnessed this in Thuthikudi struggle, Pathargadi movement etc in recent times. The arrest of the activists is a warning to all the leading elements of such movements.

The desperation of the state is completely evident in the arrest and harassment of even octogenarians like Father Stan swamy and Varavara Rao to achieve the above objectives.

There is an increasing need to fight the fascist forces by one and all. we congratulate all those democratic forces and exposing the nefarious activities of the state and especially of the Modi-Shah-RSS trio.

We call upon all the democratic and revolutionary forces and then workers, peasants, Dalits, Adivasis, Minorities and women to join together and fight back and defeat these Brahminical Hindutva fascist forces.