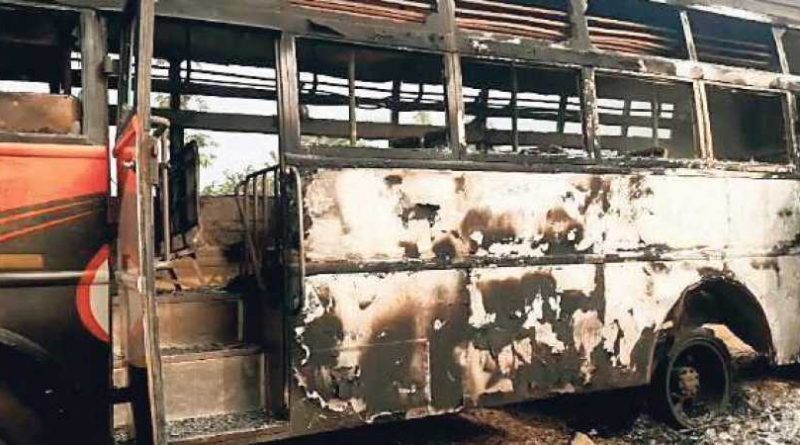 MALKANGIRI:  Maoists  torched a bus in Malkangiri district on the fourth day of their ‘Protest Week’ on Monday. No passenger was hurt in the arson. The incident took place in the morning near Mundaguda under Mathili police limits. Around 20 to 25 armed Maoists stopped the bus that was on its way to Kamarpalli from Motu. There were 15 passengers in the bus. Maoists asked them to get down and then drained the diesel from the fuel tank.

They poured diesel on the vehicle and set it afire. While the passengers were asked to leave, the ultras assaulted driver and conductor of the vehicle for defying their directive of not plying buses during the ‘Protest Week’ from January 25 to January 31. They took away mobile phones of the two before leaving the spot. SP, Jagmohan Meena said the Darva Division of CPI (Maoist) that operates from Sukma in Chhattisgarh to Mathili in Malkangiri district and Boipariguda in Koraput district is behind the incident. The BSF and DVF jawans have intensified operations in the area to nab the ultras involved in the incident. Meanwhile, the outfit has put up posters in Mahupadar village under Mathili police limits demanding withdrawal of BSF from the district.

The ‘Protest Week’ is being observed against SAMADHAN that is Union Home Ministry’s new strategy to tackle Maoist menace. On Monday, the rebels had organised their second ‘Praja Meli’ (public meeting) in the forest near Ralegada village bordering Andhra Pradesh and Odisha. Rejecting the SAMADHAN doctrine, Maoist leader Ramana had flayed the Centre and State Governments for their attempts at suppressing people’s movement. Prior to that on Friday, Maoists had unveiled a martyrs’ pillar at Ralegada .